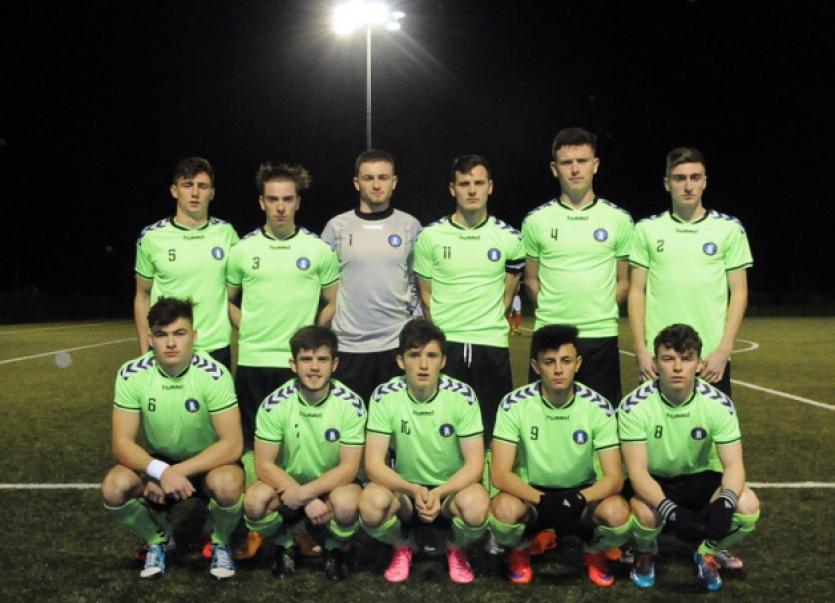 LIMERICK FC will have home advantage when they play Cork City in the National U-19 League Final on Tuesday evening.

LIMERICK FC will have home advantage when they play Cork City in the National U-19 League Final on Tuesday evening.

The game at the Markets Field is set for 7.45pm kickoff and Limerick manager Tommy Barrett is hoping that the attendance will be a big one, on the back of the Super Blues senior team’s late dash for survival from the SSE Airtricity Premier Division.

“I think we will get a big crowd,” said Tommy. “People will always come out. We have a good core of support.

“Even on Saturday night in UL (in the semi-final v St Pat’s) with the wild and windy conditions.

“It was very open out there and it was a decent crowd out there. I obviously couldn’t count it but it seemed fairly packed.

“I think at the Markets Field we will get more, could be looking upwards of 500 hopefully.

Limerick finished third in Section One of the U-19 regular season, behind UCD and Cork City.

Barrett’s side won seven of their 12 games in the campaign, with four of their losses coming against their would-be opponents in the final.

As a result of finishing third during the regular season, Limerick faced a tough trip to play Sligo Rovers in the quarter-final.

What followed was an extraordinary game in which Limerick won on penalties, the game having finished 5-5 after extra time.

Limerick had a 100% record in the shootout with Killian Brouder slotting the final penalty.

Barrett’s youthful side then faced an unbeaten St Pat’s team in the semi-final. The game was played in UL’s 4G Astroturf Pitch instead of the Markets Field as the Garryowen venue was waterlogged.

Limerick took the lead thanks to an own goal from Steven Bell after 53 minutes. St Pat’s equalised through Darragh Markey 19 minutes from time.

With St Pat’s in control, a Limerick counter attack saw Ross Mann fouled inside the 18 yard box. Clyde O’Connell made no mistake from the spot to send Limerick through to Tuesday’s final.

This was sweet revenge for a Limerick side that was beaten by St Pat’s at this stage of the competition last season.

Ross Mann will captain the side once more in the absence of captain Paudie O’Connor and vice captain Val Feeney who are suspended.

The striker said that they had plenty of motivation for the semi-final win over St Pat’s.

“Everyone wrote us off. Tommy put a poll into our Facebook chat that said everyone had St Pats to win. It gave us even more incentive to win the game.”

Despite the loss of O’Connor and Feeney, Barrett has plenty of quality performers to pick from.

Sean McSweeney, Killian Brouder and Mann have impressed for during the run and will need to be at their best for Limerick to win.