Munster’s Tiger Murphy has foot in both camps 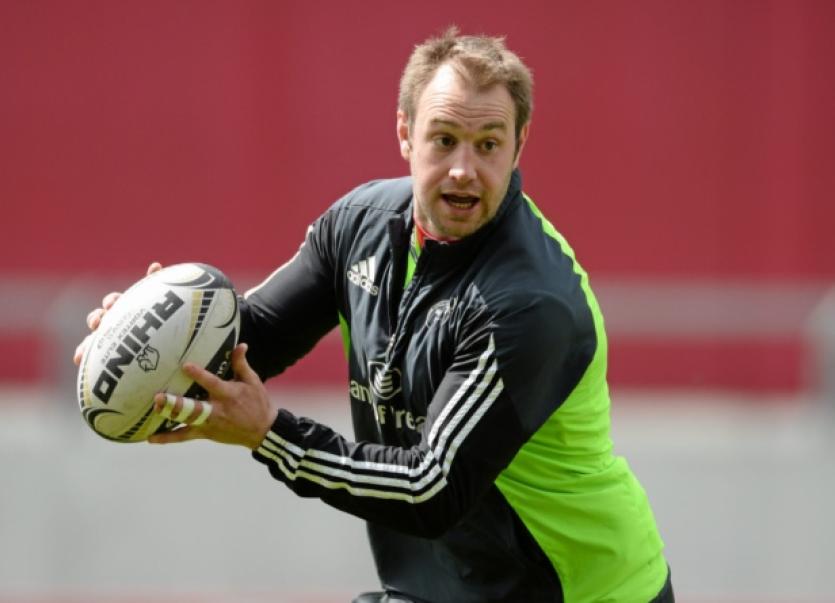 ARCH rivals yes, but with far more in common than the clubs might think. Johne Murphy was struck by the similarities between the giants of the Irish and English club game - both boasting a huge work ethic, proud tradition and passionate supporters

ARCH rivals yes, but with far more in common than the clubs might think. Johne Murphy was struck by the similarities between the giants of the Irish and English club game - both boasting a huge work ethic, proud tradition and passionate supporters

Murphy went to Leicester Tigers on a three-week trial period in 2005 and ended up staying for five unforgettable seasons. And from Welford Road, the three-time Premiership winner moved to Munster, spending five seasons at the province before announcing his retirement from playing at the age of just 30 last spring.

Kildare man Murphy had offers from three Irish provinces when choosing to ply his trade back home in 2010, but he chose Munster. Tigers’ current Director of Rugby Richard Cockerill played a part in the decision.

Murphy recalled: “They (Munster and Leicester) are very similar clubs. Munster are based on very, very similar foundations to Leicester. I spoke with Richard Cockerill at length about the fact I was leaving and where I was going. He was very complimentary about Munster and said if he was making my decision there would only be one place I would be going. They are extremely similar places and the games are incredible when they play each other.”

“I was playing with Leinster U-21s in 2005 and was by-passed for the Irish U-21s. I knew Geordan (Murphy) personally. He said; ‘send over some videos. I can’t promise you anything, but if they like what they see in the videos, you will come over on a three-week trial.’

“Dusty Hare came over and watched me play an AIL game with Lansdowne. He liked what he saw. I went over on a three-week trial and stayed five years. That was the summer of 2005 and I left Leicester in 2010.

“I arrived the same year as Leo (Cullen) and Shane Jennings went over. It was a bit of an eye-opener. On my first trial week I was training with Austin Healy, Ollie Smith, Geordie (Murphy), Andy Goode, they had nine Lions that year. It was a sink or swim kind of thing, but a phenomenal experience.

“I was fortunate in that I knew Geordan and Leo and Shane were exceptional to learn from.

“Leicester is a phenomenal place to learn your trade. The work ethic is huge. The much talked about Tuesday training sessions are for that period when you are going 15 on 15 in more than match intensity. It was an extremely physical and probably brutal experience at times. But that is what the club is built upon and why they set such high standards.”

In all, Murphy made 99 appearances for Leicester, winning the English Premiership three times, an EDF Energy Cup and was the club’s top tryscorer in 2008-2009.

Incidentally, his Heineken Cup debut came against Munster at Welford Road when Ronan O’Gara snatched a superb win for the visitors with a last gasp penalty in 2006. A few years later O’Gara and Murphy would be team-mates at Munster.

Murphy looks back on his time at Munster as an “incredible journey with lots of ups and downs”.

“I had played a huge amount of rugby under Tony (McGahan) in the first two seasons with Munster. I injured my ankle and had to have a pin and a wire put into it after the Pro12 semi-final we lost to the Ospreys over there. I was on injured list when Rob Penney came in first and I had to get back fit. Then I just had one of those injury seasons.

“I got back in, played a game, got a virus and was out for two or three weeks. I got back playing and then got a knock on my knee, things didn’t go well.

“(In 2012-2013) when Rob came I felt when I was fit I wasn’t getting the opportunities that I had gotten before. It was very disappointing. Rob and I sat down and we had a very open and frank conversation which I was thankful for. He looked up from his desk and said ‘Johne, that’s what real men do, they have an open and honest, frank conversation with each other and hopefully it’s for the better.’ It was. It very much stuck in my mind. We spoke at the end of the year and he said if I did this in the off season, come back fit, you do those three or four things, I will hold my side of the bargain and give you game time. After that it’s up to you. Both of us held our parts of the bargain. I got fit, went on a great run of form and played a lot of games and played well.”

After a highly impressive season in 2013-2014 when Murphy made 20 appearances, including 18 starts, five in the Heineken Cup, his game time dried up last term with the appointment of Anthony Foley as head coach.

“I was on the bench for the two Clermont Heineken Cup games last year, featured in the Leinster game at Christmas, then broke my nose against Glasgow and broke my hand at a really bad time when I was back in the matchday 23. That scuppered everything really. It was very frustrating. With everything I had gone through over the past 10 years in professional rugby, I didn’t particularly want another season because I felt I would have fallen out of love with the game. I didn’t want do that because rugby has given me everything.

“I started thinking about retirement last November. I watch a bit of cricket and one of the guys said when the first thought of your retirement comes into your head, it is very hard to get it out of your mind. It was there in the back of my mind when I heard that.

“I didn’t get a contract offer for Munster for this season. We had spoken, but with the lack of game time I wasn’t going to stay. I had made that decision early. When I spoke to Garrett (Fitzgerald) and Axel about it, it was very much ‘that’s fine, I agree with that’, I was looking elsewhere before that meeting took place.

“Then, when push came to shove, unfortunately for me, the right deal wasn’t out there. I had a couple of things in the Pro D2 over in France. I just felt with where I was at and what I wanted to do, it just wasn’t the correct deal for me.

“There was a chance of a World Cup joker with a top side in the Top14 and we hung on for that. It went on for six to eight weeks around the time I was getting married in the summer and unfortunately for me it didn’t come about.”

Since retiring, Murphy has started coaching with Naas RFC in Division 2A of the AIL and with leading Dublin rugby nursery St Mary’s College.

Murphy is also involved in two businesses, www.rugbyamps.ie based in Kildare Town which provides a specialised coaching as well as providing team-building weekends. Former Ireland A player Murphy is also involved along with former French star Philippe Saint-André in the PSA Academies in Tignes, France. The facility is for schools and elite teams to come and train at an Olympic training centre in the Alps. See www.psaacademies.com for details.