Andy Lee: ‘I want to be a great champion’ 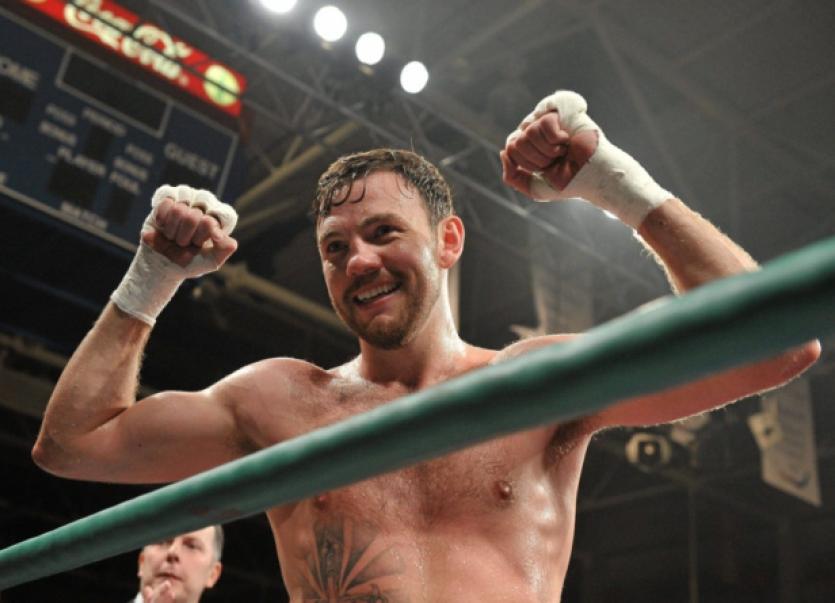 The 31 year old champion will be in the ring at about 10.15 to face Billy Joe Saunders in the Manchester Arena.

The bout is live on subscription channel Box Nation.

Ahead of the fight, Lee has spoke of his desire to be remembered as a “great champion”.

On Christmas Day 2002 the telephone rang in the Lee household in Castleconnell.

It was none other than famed American boxing coach Emanuel Steward.

Steward was a one of the world’s most recognisable coaches, with Thomas Hearns and Lennox Lewis among 40 world champions to have him in his corner.

Steward told the Limerick teenager that he would be a world champion.

Just over 12-months ago Andy Lee fulfilled that destiny when defeating Matt Korobov in Las Vegas to claim the WBO middleweight title.

This Saturday Lee defends that title for the first time - with last April’s New York bout with Peter Quillin not deemed as title fight as the American failed to make the weight.

It was to be a September bout in Thomond Park but that dream faded for Lee when illness forced a postponement. Then a training injury to Saunders forced a third date for the title fight - December 19.

Thirty-one year old Andy Lee has lived out his dream of winning a world title but now the former St Francis Boxing Club Olympian wants to be known as a “great champion”.

While Saunders is in his immediate path, unification bouts with Gennady Golovkin, Daniel Jacobs or Canelo are the ultimate target for ambitious Lee.

“My desire it to be a great champion and one that is remembered for many years to come,” outlined Lee.

“It’s very satisfying and there is a sense of fulfilment there after many years trying to reach the pinnacle of my sport but saying that as soon as I had won it my next thought was to defend it and become a great champion not just a guy who wins a belt and it s flash in a pan and next Saturday is a big part of that,” he explained.

“It’s been delayed twice but in boxing that happens - it’s happening to me in the past and hopefully doesn’t happen again. I knew the fight was going to happen because we had signed the contract and he was the mandatory challenger. It wasn’t a matter of if but when - finally it’s here after a long time training and preparing and thinking about Billy Joe Saunders I am getting a chance to fight him and hopefully successfully defend my title. Everything happens for a reason - we are here now and I am eager to get in the do the business.”

While its one year since his title win over Korobov, Lee did fight in the Spring.

“I fought in April against Peter Quillin, which because he didn’t make the weight wasn’t classed as a title defence but it was still a very hard fight that went 12-rounds and I got knocked down in that fight and had to fight my way back. The rest or time off from the ring has done me well - I have been training the whole time. Even since then I believe I have gone on and improved,” he vowed.

His KO world title success made Lee the first Irishman to win a world title bout in the US since 1934.

“I am massively proud - it took a long time and a lot of hard work. I had two losses along and way and a lot of people would have wrote me off going into the world title fight last year. I was 6/1 underdog and that was probably a fair reflection but I believed in myself and I knew going into that fight what I was capable of,” said Lee.

This Saturday the Limerick southpaw brings a record of 34 wins from 37 pro fights into the ring. Twenty four of his wins have come by way of knockout. After the untimely death of Emanuel Steward in October 2012, Lee moved to London to link up with Adam Booth – best known for David Haye.

The new partnership are undefeated in seven bouts and untimely it was Booth that added the final finesse to what Steward had moulded.

Lee is hopeful that almost a decade in the pro-game will be a big advantage to him this Saturday.

“With a long career and the tests and fight that I have had all over the world is a lot of experience. When you are in the ring for a hard hard fight there are questions asked of you physically, mentally and emotionally and I have answered those questions time and again and I don’t think he says - not in the same way that I have. He will find out that he is in a hard fight when we get in that ring and he will see what he is made of,” explained Lee.

“I am confident and without bragging or being over confident I will knock him out in maybe seven rounds.”

But undefeated Saunders will bring just as much confidence and Lee is wary.

”I have a serious test against Billy Joe Saunders - he is the number one contender and is undefeated. He is not a hand picked opponent - he is a genuine challenge and I have to be ready and up for it and that’s one of the motivating factors for this fight that I am facing a good fighter and if I am not at my best I will lose,” he warned.

“I think it will be a boxing match and not so much a brawl - I think it will be a highly skilled fight. He is a technical boxer and very slick and quick but he doesn’t punch with the same power as me and I have a height and reach advantage. As well as that I have a lot of experience on him and I think that will be key in the fight.”

“Most people would say that he won’t win by knockout - I hope he does come to fight and for a knockout because that will leave him exposed and give me a chance to catch him. I anticipate that he will be cagey and try and nick a points decision by using his speed and footwork so I have to counteract that and be ready at all times and meet him with punches”

“This would be a successful defence and it’s a big fight because Billy Joe Saunders is by far the best middleweight to come out of England in a long long time and I have to beat him. This is world championship boxing and every fight is hard.”

“Preparations for the fight could not have been any better; I’m at my best and physically and mentally prepared for this fight,” said a confident Lee.

“The fans are going to be in for a treat; I am in a good frame of mind, I am the champion, I have the title and the pressure is all on Billy Joe to try and take it off me and that’s not going to happen,” he vowed.

“The talk and predictions about the fight will end when the first bell rings, I am primed for battle and have all the tools in my arsenal to win the fight and I intend to use them on Saturday night. My total focus is on winning and nothing else.”

The confidence of Lee was echoed by his coach Booth.

“We have prepared for the best of Billy Joe Saunders; he had a successful amateur career and is undefeated as a pro. However, Andy is a big middleweight and comes into the ring with vast experience as an amateur and professional,” explained Booth.

“Andy has the skill set to beat Billy Joe; he can box on the outside, fight at close quarters and has the power to take a fighter out”