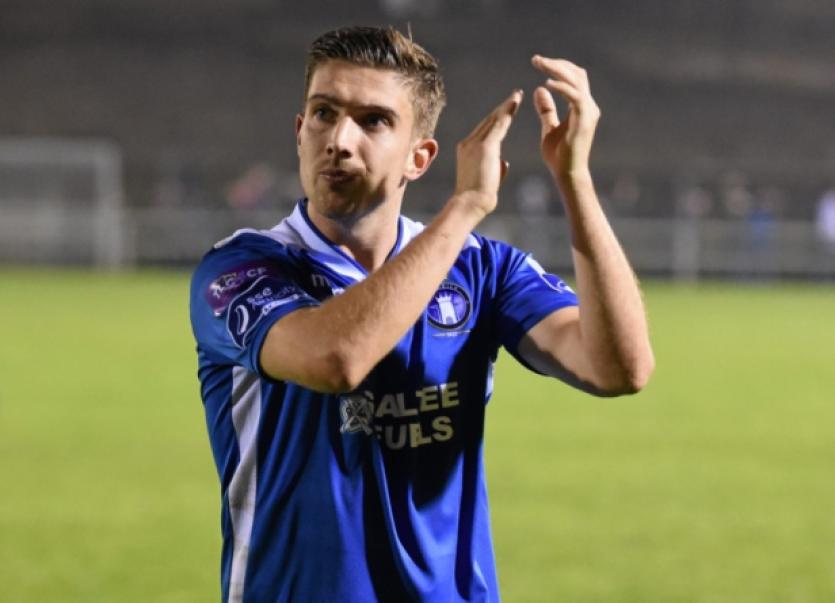 Limerick have Donegal native Shaun Kelly to thank for their slender one-goal lead going into the second leg of the promotion/relegation playoff.

Limerick have Donegal native Shaun Kelly to thank for their slender one-goal lead going into the second leg of the promotion/relegation playoff.

The Killybegs native opened the scoring with a thunderbolt after just half an hour to net his first goal of the season.

He said: “About two minutes beforehand, I went mad at Turner because he didn’t give me the ball. I thought that the shot was on. Next time, he did give me it. I looked up and saw that I wasn’t closed down too quick so I just took the shot and thankfully It went in.”

In the second half, Kelly was involved in a two-footed lunge with Tony McNamee but was only awarded a yellow card much to the disbelief of the huge home crowd. According to Kelly, McNamee said it wasn’t a red card.

He explained: “Tony [McNamee] actually said to me after that he didn’t think it was a sending-off. A few of the boys did say there that maybe I was lucky though. To be honest, I wasn’t going in to be malicious or anything. In the changing room there, I thought maybe it was a bit hard and silly but I didn’t hurt him or mean anything bad by it. I was just going in to win the ball and when I got the yellow, I was thankful.”

The game was competitive from the off but a few nasty challenges did creep into the game. Limerick had the majority of the ball, but Harps were rock solid at the back. Kelly – being a local – understands that it’s in Harps’ nature to bring physicality to a game. That approach appeared to work as Harps are very much alive in the tie.

Kelly said: “It was a feisty game. Finn Harps are always like that. There’s some good players in there and a lot of them have been around a long time. We said it before that they were going to set up to defend and I think they came down here and did just that. We’re still thankful we got the one-goal lead going up to Finn Harps on Friday.”

The tie is very much in the balance as Martin Russell’s men travel to Ballybofey for the first time since 2012 – knowing a third clean sheet for the season can see them retain their Premier Division status for 2016.