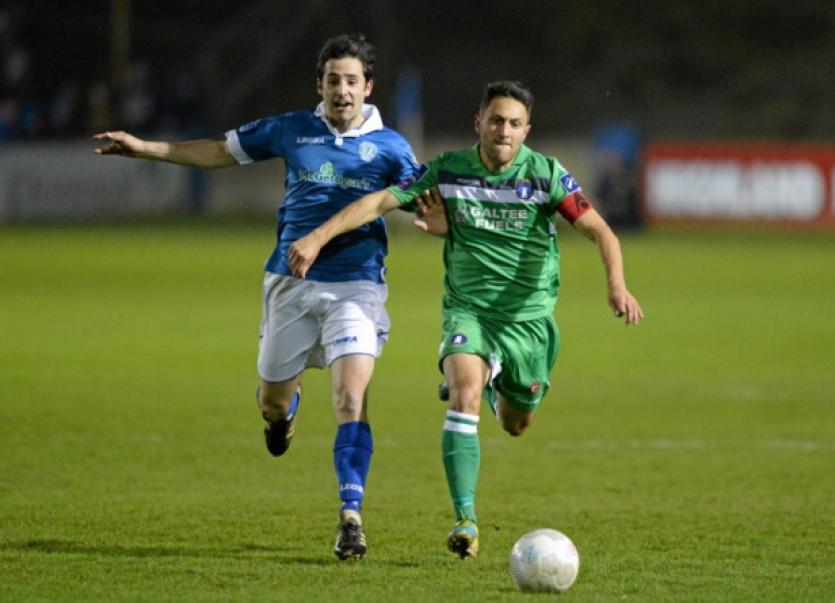 LIMERICK FC’s Premier Division survival hopes were shattered in the most dramatic fashion as Martin Russell’s side suffered a bitterly disappointing 2-1 aggregate play-off defeat to Finn Harps at Ballybofey on Friday night.

LIMERICK FC’s Premier Division survival hopes were shattered in the most dramatic fashion as Martin Russell’s side suffered a bitterly disappointing 2-1 aggregate play-off defeat to Finn Harps at Ballybofey on Friday night.

The two-leg Premier Division relegation/promotion play-off looked all set to be decided by a penalty shoot-out before Harps substitute BJ Banda struck with the Donegal side’s second goal four minutes from the end of extra-time to see the home side record a 2-0 win on the night.

The goal sent Harps supporters in an official attendance of 3,200 into raptures, but signalled the end of Limerick FC’s thrilling bid to complete a stunning great escape.

Limerick, who failed to win any of their openng 21 league games. had produced a stunning run of results since August, to secure their place in the relegation play-off.

Instead of playing in the Premier Division for a fourth successive season, Limerick FC must now contemplate life back in the First Division in 2016.

Limerick FC had taken a 1-0 lead to the Co Donegal venue, thanks to Shaun Kelly’s stunning 25 yard strike at the Markets Field in the first leg. However, the advantage was wiped out by Michael Funston’s 29th minute goal.

After a nervy opening, Limerick had to withstand some sustained Harps pressure in the opening quarter, with the home side forcing three corners in quick succession. Harps best chance of drawing level on aggregate came after 21 minutes but Freddy Hall did superbly to deny Raymond Foy’s with a stunning save.

Limerick FC did create a decent chance of their own on 29 minutes but Robbie Williams header from Shane Tracy’s well-placed corner was cleared off the line. A follow-up attempt from the Blues also cleared in the six-yard box.

Limerick FC fell behind on the night after 39 minutes when Michael Funston seized on some very poor defending from the visitors to put Harps in front after rounding the ‘keeper.

The home side deservedly maintained their 1-0 lead until half-time before an enthusiastic home support.

Blues central defender Patrick Kanyuka was yellow-carded for a foul on Harkin as he raced through on goal soon after the restart. Harps fans were baying for a red card. McHugh’s free-kick from the edge of the box flew just over the crossbar.

Kanyuka was replaced by Sean Russell on 57 minutes and, as a result, Paul O’Conor switched back into the hearts of the Blues defence.

The game became more stretched as the half wore on with tiredness an obvious factor as the players were playing their third game in seven days. Throw in lengthy trips to both Sligo and Ballybofey into Limerick’s itinerary.

Limerick had a chance to go ahead on aggregate in the 85th minute as Lee J Lynch squared the ball for Sean Russell, but the substitute’s effort flew agonisingly over the crossbar.

As neither side managed to score for the remaining minutes, the tie went into extra time. Harps fell back deeper from a defensive point of view as extra time began, seemingly the happier side for the game to go to penalties.

While Limerick did create a couple of half chances, the best chance of extra time fell to substitute Crossan, but his effort from the edge of the area flew. Then, enter Banda who proved the Harps hero heading in from close range in the 116th minute.