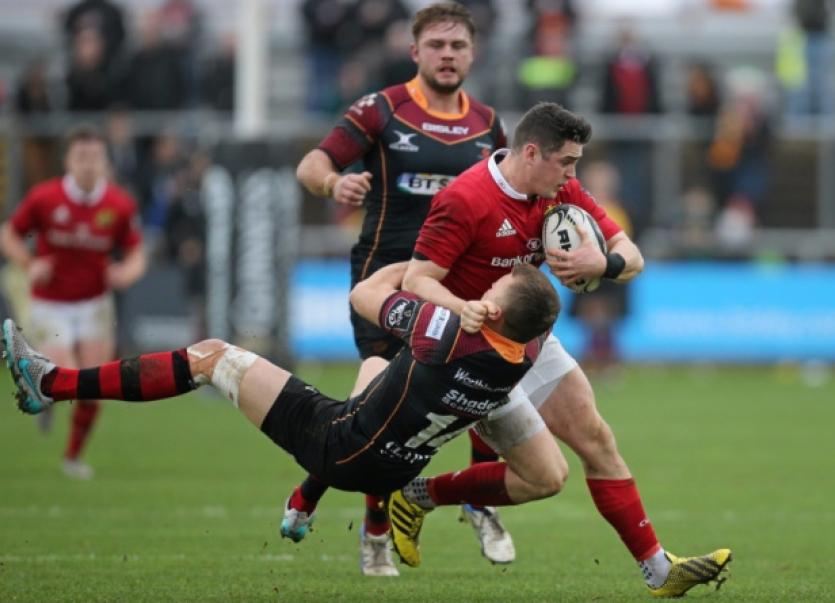 HEAD coach Anthony Foley admitted his Munster side ‘let ourselves down big time’ in slumping to a disappointing defeat to the Dragons, just six days before the crunch Champions Cup clash with Leicester Tigers at Thomond Park.

HEAD coach Anthony Foley admitted his Munster side ‘let ourselves down big time’ in slumping to a disappointing defeat to the Dragons, just six days before the crunch Champions Cup clash with Leicester Tigers at Thomond Park.

Foley’s charges shipped 16 unanswered points in the final quarter at Rodney Parade to suffer a thumping 22-6 defeat to the Welsh region yesterday.

Following the heavy defeat to the Dragons, Foley defended his decision to make 10 changes to the side which had lost to Connacht for the trip to Newport.

Foley said: “We got to make changes. We are in competitions here. We have injuries, we have fellas we have to look after. It has to be done. Fellas had opportunities today, they didn’t take them.

Foley insisted the poor display against the Dragons wasn’t down to a lack of confidence following the home defeat to Connacht.

“Confidence isn’t about touching down the ball. Catching a pass is not confidence. That is being able to do your job and we didn’t do that today. It’s very frustrating.

“We want to get our heads down and make sure we get a performance against Leicester at Thomond Park, make sure we stop the rot.

“Leicester are right up there in the top half of the Aviva Premiership table. They were down a few points against Worcester yesterday and came back. They are going to be a tough outfit to beat.”

Foley said he hoped Conor Murray and Francis Saili, who missed the Dragons clash due to injury, would return to training this week.