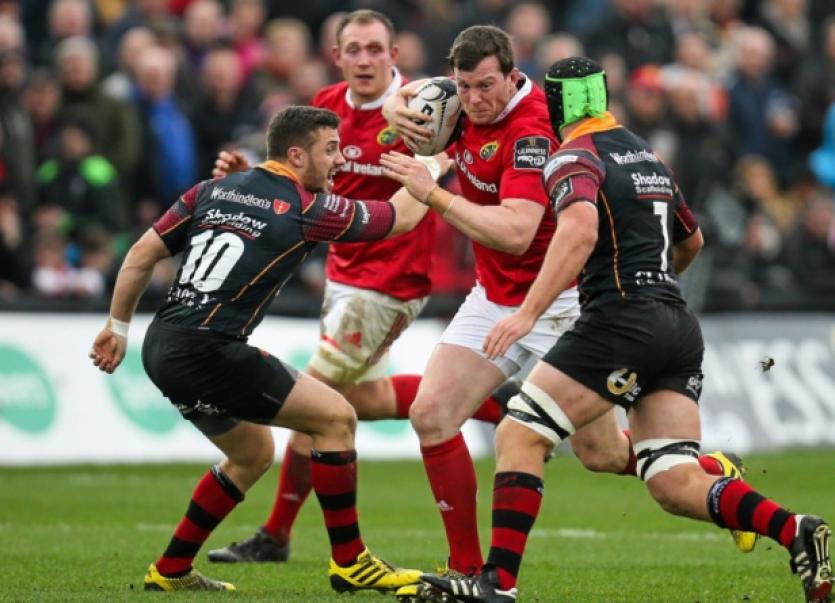 MUNSTER utility back Denis Hurley has insisted there will be ‘a different edge’ to the side in Saturday’s crucial European Champions Cup clash with Leicester Tigers at Thomond Park, 7.45pm.

MUNSTER utility back Denis Hurley has insisted there will be ‘a different edge’ to the side in Saturday’s crucial European Champions Cup clash with Leicester Tigers at Thomond Park, 7.45pm.

Smarting Munster will be desperate to get back to winning ways against the Tigers after suffering their second successive defeat in the Guinness Pro12 on Sunday.

Leicester will arrive in Limerick top of Pool 4 after recording bonus point wins over Stade Francais and Treviso in their two opening Champions Cup fixtures. Munster, for their part, are on five points after their scheduled second round meeting with Stade was postponed last month due to the Paris terrorism attacks.

Leicester ended Munster’s 26-game unbeaten home run in the European Cup, stretching back over 12 seasons, when winning at Thomond Park 13-6 in January 2007.

Denis Hurley says Leicester will be difficult opponents this weekend. While Munster slumped to a 16-point Pro12 defeat to the Dragons at the weekend, Leicester roared back from a 17-point deficit to beat Worcester 29-20 in the Aviva Premiership.

Hurley said: It will be (a tough week) but there is a few fresh bodies who weren’t involved this evening and hopefully they’ll have that energy ready to go into that big game next weekend. We know how tough a fixture it’s going to be and I suppose we’ve learned a lot of lessons again and it’s how we use it really. We know we need to respond now. In Europe there is a different edge to us and hopefully we’ll bring that out.

”Obviously the postponement of the Stade Francais game means we have back to back Leicester in the Champions Cup and then back to back Stade after Christmas. There are big fixtures in between as well and we’ve got to take it week by week. Next weekend is the real focus of the squad for now.”

Munster will be anxious that scrum-half Conor Murray, centre Francis Saili and hooker Mike Sherry are fit to feature.

More than 20,000 tickets had been sold for the crucial European Cup clash at the start of the week and Munster will hope the attendance reaches capacity level by kick-off time on Saturday. The game will be televised live on BT Sport.

Hurley believes the players who were rested for the trip to Newport at the weekend will rejuvenate the side on Saturday. Munster made 10 charges for the Dragons tie.

“The fresh bodies as I’ve said are going to be important to rejuvenate the squad and it’s going to be a tough week ahead, but we’ve got to look forward to it as well.”