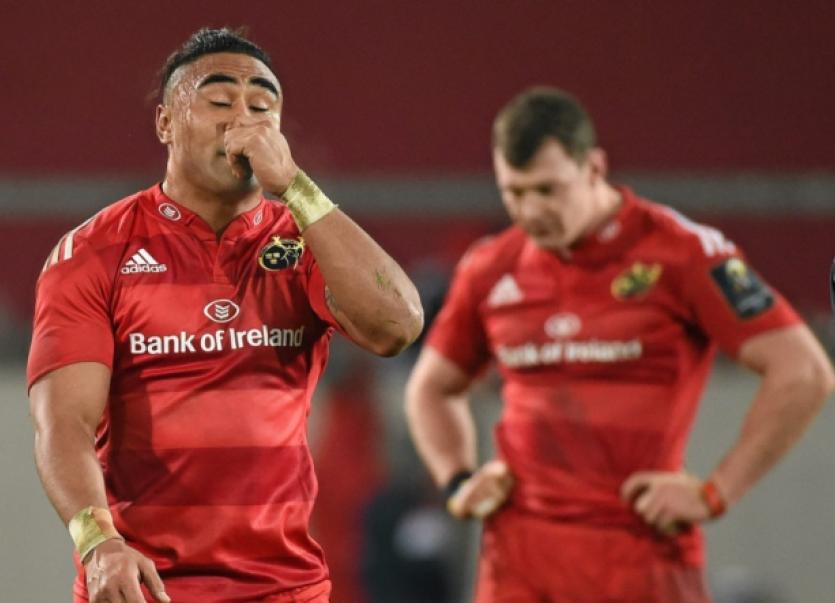 MUNSTER’S hopes of progressing to the knock-out stages of the European Champions Cup are hanging by a thread after the province suffered a hugely disappointing 31-19 defeat to Leicester Tigers at Thomond Park.

MUNSTER’S hopes of progressing to the knock-out stages of the European Champions Cup are hanging by a thread after the province suffered a hugely disappointing 31-19 defeat to Leicester Tigers at Thomond Park.

Misfiring Munster contributed handsomely to their own downfall with a crippling error count, as the Tigers became the first side to win twice at Thomond Park in the European Cup following their 2007 success.

The Tigers, who led 18-6 at half-time, outscored their opponents by three tries to two, before an official attendance of 22,261.

Munster now face a difficult trip to Welford Road to take on Leicester in the second of their back-to-back fixtures on Sunday, December 20, 5.15pm, when only a victory will prevent Munster from all but departing the competition before the quarter-finals for a second successive year.

Despite a highly encouraging opening half an hour, Munster found themselves trailing by 12 points, 6-18, at half-time.

Munster’s out-half Ian Keatley, who had an indifferent game, and his opposite number Owen Williams shared four penalties in the opening 29 minutes to see the sides level, 6-6.

Keatley missed a straight forward penalty attempt to make it 9-6, before referee Romain Poite controversially reversed a penalty award against Munster for a James Cronin shove when he appeared to be pushed by Dan Cole, a decision coach Foley later described as a ‘disgrace.’

However, the complexion of the game changes as the home side shipped two tries before half-time through winger Verenki Goneva after 33 minutes and lock Michael Fitzgerald who pounced on a Munster line-out error to score from five metres.

Munster gave themselves a lifeline within two minutes of the re-start when quick-thinking James Cronin pounced on the ball to touchdown while Tigers scrum-half Ben Youngs dilly dallied with the ball at the back of a ruck.

Keatley, who had a night to forget, missed the conversion, but landed a penalty goal four minutes later to reduce the visitors lead to four points, 14-18. And Munster were handed another boost when Tigers prop Marcos Ayerza was yellow-carded soon after.

However, Munster were dealt a hammer blow soon after when the sniping Ben Youngs slipped through some very poor defence before touching down. Williams conversion stretched the Premiership side’s lead to 11 points, 14-25.

Back came Munster again and a terrific break from Keith Earls up the wing ended with replacement hooker Mike Sherry touching down. Unfortunately, Keatley was off target with the conversion.

However, any hopes Munster hang of prouding the great escape were ended when Tigers out-half Thomas Bell kicked two penalty goals in the closing 10 minutes to seal a deserved victory.