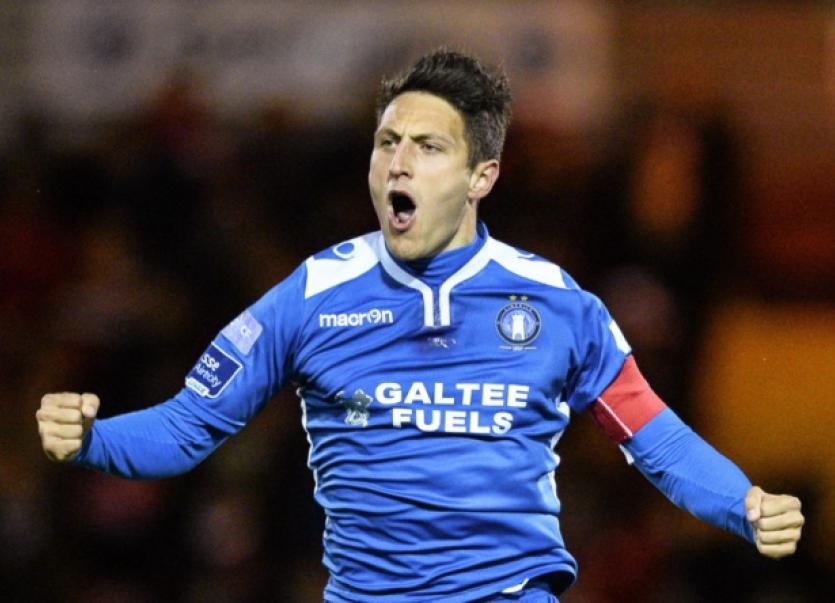 Limerick pulled off one of the most amazing great escapes in Sligo on Friday night – as they avoided automatic relegation with a helping hand from Shamrock Rovers.

Limerick pulled off one of the most amazing great escapes in Sligo on Friday night – as they avoided automatic relegation with a helping hand from Shamrock Rovers.

Limerick’s 3-2 win over Sligo Rovers in the Sportsgrounds, coupled with Shamrock Rovers 5-3 win over Drogheda Utd in Tallaght meant that Limerick finished on 29 points one ahead of Drogheda. They will now play Finn Harps in a promotion/relegation play-off over two legs. The first leg will be in the Markets Field on this Monday night with the return game in Ballybofey on Friday.

On a night of high drama, Shane Duggan gave Limerick the lead inside five minutes. A short corner routine between Sean Russell and Ian Turner allowed the latter to advance to the edge of the box before squaring to Duggan. His shot found the bottom corner to send the visiting fans into raptures.

Sligo were given a lifeline by referee Tom Connolly who pointed to the spot after Patrick Kanyuka fouled Dinny Corcoran. Freddy Hall saved his blushes however – getting in front of Corcoran’s tame effort.

The Blues were sent into dreamland on 27 minutes thanks to Paul O’Conor. The ex-Sligo midfielder scored a crucial equaliser for Martin Russell’s men at this venue in the first series of games, and netted again after Shane Tracy’s effort smashed back off the crossbar.

Sligo did eventually find their goal – via the last kick of the half. A break down the left had Limerick in trouble. Keith Ward’s cross was deflected towards the back post where Sander Puri was on hand to place calmly into the far corner.

The decisive goal came in Limerick’s favour when Vinny Faherty netted two minutes before the hour – smashing it home at the far post.

A late scare came from Ruari Keating as he netted in stoppage time, but Martin Russell’s men held on.

The win was Limerick’s first in Sligo since 1991 and by overtaking Drogheda, it was the first time since early April that they moved off the bottom of the table. Drogheda are now automatically relegated to Division 1. Limerick have now two games to complete the greatest escape of all, one that looked so unlikely when they failed to win any of their opening 21 games.

For now, the show goes on.