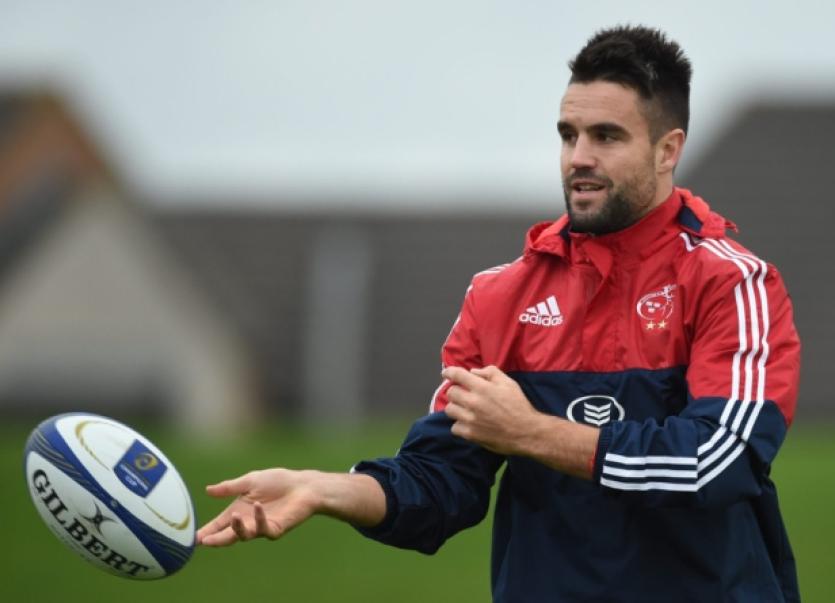 SCRUM half Conor Murray insists complacency won’t be an issue for Munster as the province faces Pro12 basement side Treviso in their European Champions Cup pool opener at Thomond Park on Saturday, 5.15pm. He talks to Leader Rugby Correspondent, Colm Kinsella

SCRUM half Conor Murray insists complacency won’t be an issue for Munster as the province faces Pro12 basement side Treviso in their European Champions Cup pool opener at Thomond Park on Saturday, 5.15pm. He talks to Leader Rugby Correspondent, Colm Kinsella

Is it nice to be back at Munster after the World Cup?

Conor Murray: “Immediately after the Argentina game we were given a week off, which was very much needed for me anyway, I can’t speak for anyone else. It was a tough thing to get over.

“Probably will live with a lot of players for a long time. Hopefully until the next World Cup if we have a chance of getting there. We needed a bit of time off, but then you are coming back into Munster and they are on their own buzz, and they have their own goals and they’re performing really well and they are looking forward to big games.

“I kind of felt like an outsider coming back, with a lot of new faces, missing a lot of old faces. It didn’t take a little while to get back into it, but it was just a bit different, and then you are straight into it, and training with the lads there is a good buzz. They are fully focused on the immediate future, and the games they are playing in.”

Is it easy to park the Argentina game?

CM: “I probably haven’t watched all of the game. I watched bits of the Argentina game. For me, and again I can’t speak for other players. That will live you for a while. Little bits, you think you could have done things better and so on and so forth.

“You have to park it, you don’t have time to dwell. You probably were feeling sorry for yourself for a few days, but then when you get back into training, the lads are buzzing to Edinburgh last week, and Europe now. They kick you out of that.”

Is it very different here now without Paul O’Connell?

CM: “Obviously missing Paulie, in the dressing room you definitely realise it. But I think being away from the squad, CJ (Stander), he’s become a real leader in this team. His experience over the last couple of years, just him, one example of being with Paulie and being with these older lads and listening to them, and understanding the standards that are expected.

“He almost sounds like Paulie now, he really gets it, and gets this club and gets where we want to go. He’s driving it along with a number of other players. It’s different without them, but Paulie and Donners and the likes, and RO’G who have moved on, have educated the younger group of players underneath them and have passed on a few useful tips.”

Have you assumed more of a leadership role now?

CM: “There is a group of us, at a similar age who have been through Europe a few times and felt a few disappointments and a few good nights as well. It is good bit of experience in our books there, that we can get people together.

“Especially with this being our first time in Europe with this group of players. We do need a lift in intensity this weekend and for next weekend. So just trying to let people know that there has to be a difference in training this week, and a difference in mentality.”

How much of a motivating factor is not making the quarter-finals in Europe last season?

CM: “It hasn’t been talked about, maybe when I was away they spoke about it, but this is a new group of players with a lot of desire and a lot of people who wish to succeed in this team. I think, without doubt, that is one of our aims - to get out of this group and get into the knock-out stages.

“You don’t want to pile on the pressure too much onto the players who are playing in Europe for the first time, talk about the past and stuff. But we will learn from our own experiences.”

CM: “We have had plenty of tough battles against Treviso. I think we lost last year or the year before when we went over there. Europe is a different kettle of fish and you have to perform a little bit better than you usually do week in and week out in your league. I don’t think there is complacency within the squad. There was an edge in training today. People are on their toes.”