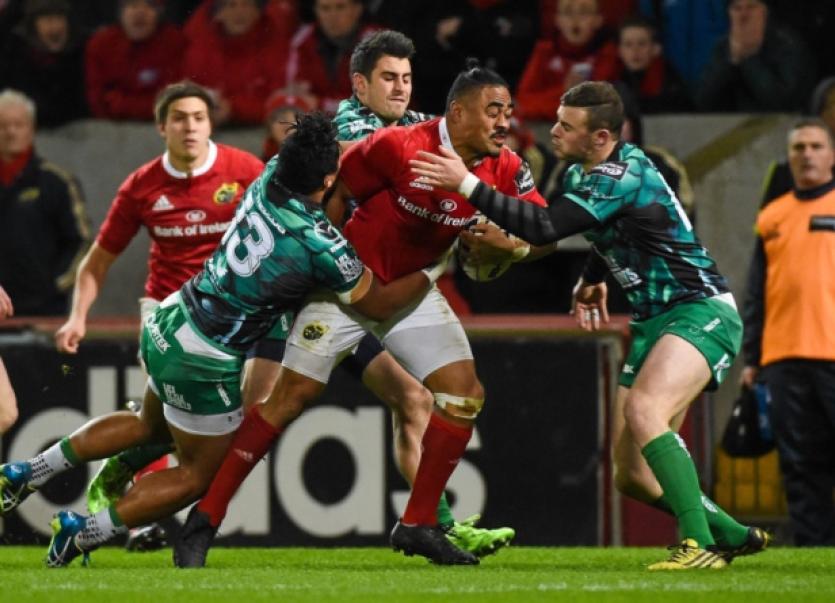 MUNSTER suffered their first defeat against Connacht at Thomond Park for 29 years as Connacht scored a famous 18-12 success in their top-of-the-table Guinness Pro12 clash on Saturday night.

MUNSTER suffered their first defeat against Connacht at Thomond Park for 29 years as Connacht scored a famous 18-12 success in their top-of-the-table Guinness Pro12 clash on Saturday night.

Tries in either half from Tiernan O’Halloran and Man of the Match Bundee Aki late on helped Pat Lam’s side score their first competitive success over Munster in Limerick in the professional era.

Munster, odds-on favourites at 2/9 before kick-off, were soundly beaten by their impressive opponents, who displayed a huge intensity throughout, bossing the collisions and breakdown area.

Munster were suffering their second defeat of the Pro12 season before an attendance of 9,242. A significantly greater number of tickets, 15,143, were in fact sold for the game.

High-flying Connacht made the perfect start with Craig Ronaldson’s 11th minute try for the visitors, followed by a try from winger Tiernan O’Halloran six minutes later. Centre Ronaldson duly converted to help Pat Lam’s side into a 10-0 lead.

Resilient Munster fought back strongly and hooker Niall Scannell touched down following a well-executed maul after Jack O’Donoghue had taken an excellent line-out catch. Despite that try, Connacht were good value for their 10-5 interval lead.

While Munster enjoyed a decent supply of territory and possession through much of the third quarter, the home side failed to add to their tally.

And Connacht moved two scores to the good on 57 minutes, 5-13, when Ronaldson kicked his second penalty goal of the game.

The complexion of the game changed hugely in the 65th minute when Munster was awarded a penalty try after the match referee consulted with the TMO and judged that Andrew Conway had been impeded as he tried to take a pass Ian Keatley which open country ahead of him. Connacht captain John Muldoon was sin-binned for the tackle and Keatley’s conversion left a point between the sides at 12-13.

Connacht showed admirable resilience to hit back, but Donaldson was wide with a 72nd minute penalty attempt. However, there was no denying Connacht in the 77th minute when Robbie Henshaw sent Bundee Aki over in the left corner to score a smashing try.

Munster were left breathing a sigh of relief when Ronaldson’s conversion attempt flew narrowly wide, leaving the home side to salvage a losing bonus point.