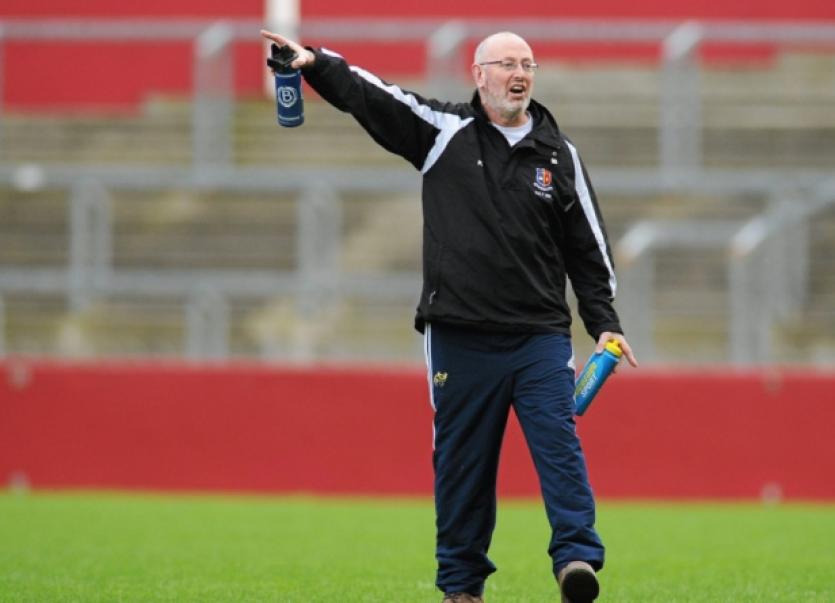 St Munchin’s College have honoured two of their long-serving rugby coaches who have retired from teaching in the school.

St Munchin’s College have honoured two of their long-serving rugby coaches who have retired from teaching in the school.

Saturday morning and clusters of parents and pupils gather around the senior pitch in St Munchins College.

The code yellow storm has run its course and the sun has made one of its disinterested November appearances. St Munchin’s junior cup team are down to play Pres from Cork in a challenge match but between these two heavyweights there’s no such thing as a friendly. Munchin’s last three Senior Cup Final victories have been at the Corkmen’s expense. Schools’ rugby always has an element of retribution.

Detached high above on his hill next to a stand of great beech trees, their coach Pat Cross surveys the battlefield and imparts precise positional advice to the full back. Closer to the action outside any notional technical area, John Broderick throws a few of his idiosyncratic decibels towards a pack that’s doing a satisfying job. What is noteworthy about the scene is that both men have supposedly retired.

Later that evening, staff and friends of St Munchin’s gathered in the Strand Hotel to celebrate the epic contributions of both men to the lives of so many. Between them they have almost 60 years of dedication to the Munchin’s cause and to the cause of sport in Limerick. They have been fine exemplars over three decades of that creature in danger of extinction - the teacher/coach. Neither man coached in Munchin’s for money or personal gain. They gave their time because it was part of their vocation, part of their mission, part of the purity of schools’ rugby.

Together and separately they have brought their professionalism in the classroom to bear on the sportsfield (Pat taught chemistry while John developed a love of Irish in many a reluctant learner). As teachers and as coaches they nurtured young boys along the fraught and troubled path of adolescence, creating on the rugby field a stage where they could express, excel and dream.

Many of those dreams came true. They combined as a successful unit for the first time by winning the Junior Cup in 1998, the first occasion in 20 years that Munchin’s had done so. They shrugged off defeat in the senior cup final in 2001 to do a remarkable treble, winning the trophy in 2002, 2004 and 2006.

Those who know Pat and John would be surprised at how much they have in common. Both are proud city men - John from Garryowen and Pat from Hyde Road - both went to CBS, both are spiritual ‘Cookies’ and both had sons in Munchin’s who won the Senior Cup. Fintan Cross scored the winning try in 2004 while Eamonn Broderick offloaded to someone called Keith Earls for the winning try in 2006. Critically both were interested in the under dog and fighting the corners of those who might otherwise have been ignored by an establishment with whom they often had a frayed relationship.

Yet there were also differences. Pat was the ‘backs man’, a sporting prodigy who excelled at hurling (Harty Cup Finalist), soccer (Irish Schools) and rugby (Munster schools despite being from a non ‘A’ school). He went on to play for Munster (35 caps) and Ireland ‘A’ and to coach the U-21s in two World Cups.

John’s playing career was less auspicious - “I was a hooker” - but as a coach he was both feared and respected by all who came across this notoriously fiery tornado of energetic single-mindedness.

At the retirement dinner Pat talked about how quickly his 35 years in SMC had flown and how he had enjoyed every bit of the challenge. He noted with a hint of emotion how the turf of Munchin’s breeds something special, a sacred bond between those who have nourished their skills in the famous shirt. He pointed out by way of evidence that so many lads who have made it in their own way always come back.

Keith Wood, the only Irish player to have won the International Player of the Year award, can be seen most Mondays coaching 1st years with a collection of less exalted past pupils who want to give something back to a place that has a special nook in the hearts. Where else would this be seen, he asked rhetorically. John spoke poignantly about how rugby helped him and his charges deal with the vicissitudes of life especially with Kipling’s ugly twins of ‘triumph and disaster’. Rugby, like teaching, he said is about forgiving and forgetting, about learning from failure and life’s kicks and bruises and moving on to the next chance.

He reminded us of the inclusivity that marked Munchins, how lads from differing socio-economic backgrounds with differing academic ambitions combined harmoniously on the sportsfield in a way that society seems to conspire to prevent.

Sport for both men was the avenue to redemption for so many kids lost in the chartless doldrums of the teenage years. It gave purpose, meaning and direction and enabled them to engage constructively with life’s bewildering demands and challenges.

Among those who couldn’t make it to the dinner were Ger Slattery and Conor Murray. Both recorded on video their heart-felt thanks for the part played by Pat and John in their early careers.

Ironically Conor had to settle for a place on the bench in the senior cup win in 2006 an event which team mate Keith Earls regularly reminds him of. Ger and Conor reflected the massive contribution made to the sporting life of our city. In last year’s College magazine Pat and John named their starting 15 of Munchins’ players they had coached.

It was, especially in John’s case, controversial but the team-sheets made for a mouth watering prospect if they could ever take the field in a fantasy game of rugby. With Pat directing the backs and John doing his forwards thing, and the Munchin’s 16th man in the stand, you’d have to think they’d give the All Blacks a run for their money.

Their retirement would be a great loss, but as Saturday morning on the senior pitch showed - with the Juniors fighting and beating Pres in that ‘friendly’ - roared on passionately by two old timers, Munchin’s coaches never retire.