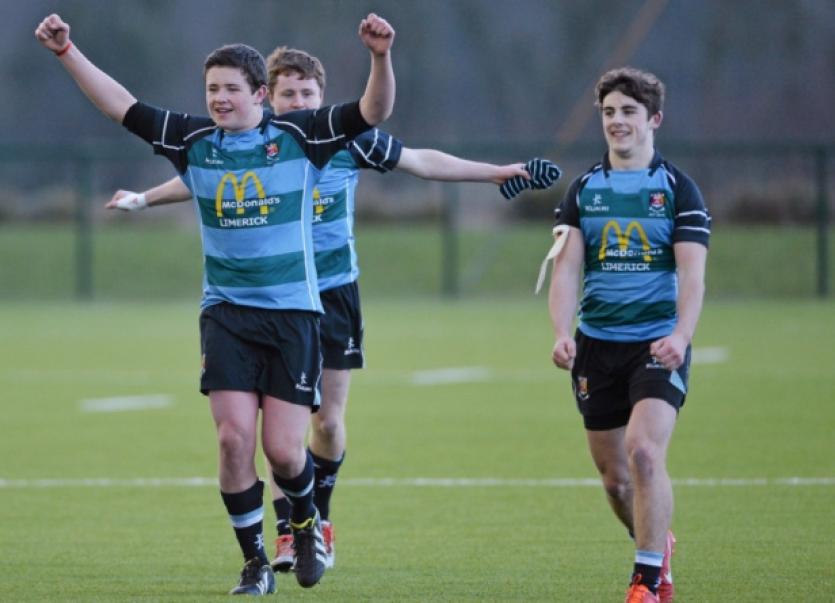 CASTLETROY College remain on course to win their first Munster Schools Senior Cup title since 2008, after a 20-10 victory over Glenstal Abbey on UL’s 4G pitch on Tuesday.

CASTLETROY College remain on course to win their first Munster Schools Senior Cup title since 2008, after a 20-10 victory over Glenstal Abbey on UL’s 4G pitch on Tuesday.

Two crucial opening half tries from winger Paul Butler and hooker Mark O’Mara, along with the 10 points from the boot of reliable goal-kicker Conor Linehan, propelled Castetroy into the last four of the Cup.

While Castletroy may have been underdogs when recording their surprise opening round win over fancied Rockwell College, the Newtown students carried the mantle of favourites into this knock-out tie played in windy, bitterly cold conditions.

The tag of favourites didn’t appear to weigh heavily on Castletroy in the opening half of this Limerick derby clash.

With Mark McCarthy superbly pulling the strings at out-half, and talented centre John Fox threatening with ball in hand, the Newtown school dominated possession and territory during the opening half.

The articicial playing surface made for a quick tempo game, with both sides able to recycle the ball quickly at the breakdown.

Castletroy College hit the front on nine minutes when McCarthy floated a well-placed pass out to winger Paul Butler, who showed a terrific combination of power and pace to fend off several would-be tacklers before touching down in the left corner.

A second Castletroy try followed in the 20th minute when, following an excellent line-out win, the Castletroy forwards mauled their way over the Glenstal try-line. Exciting young hooker Mark O’Mara, one of two nephews of former Munster and Ireland prop Peter Clohessy in their starting line-up, was credited with the touchdown.

O’Mara and his front-row colleagues Joseph Conway and Conor Myers were members of Castletroy’s Junior Cup winning side of last year, along with centre David Rowsome and replacement winger Sean McBrearty.

Linehan again converted to help his side into a significant 14-0 half-time lead.

Glenstal rallied in the second half, making good use of the elements, with prop John Healy, number eight Neilus Mulvihill, out-half Jack Stafford and centre Jamie McAleese especially prominent. After Jack Stafford and Linehan had traded further penalties in the third quarter, the Murroe side struck for a precious 55th minute try.

Glenstal were rewarded for their bravery when opting for a scrum when awarded a penalty deep inside the Castletroy ‘22. From quick ball off the scrum, centre Jamie McAleese powered his way over the line. Stafford also added the conversion to leave a single score between the sides at 17-10.

However, resilient Castletroy kept their composure and Linehan kicked a 68th minute penalty goal, a score which put the game beyond plucky Glenstal’s reach.

Castletroy College team mentor, Mairtin Burke agreed it was vital they put the wind advantage to good use in the opening half.

Mairtin Burke said: “I am satisfied with that performance. It was a very tough game. Glenstal came at us all the time, particularly in the second half. If we been a little mentally weak, we could have let it slip.

“In fairness, our boys dug in and got the result for a finish, but barely.

“We knew going out that if we had the wind at our backs, we had to make use of it. I thought the boys did that very, very well.

“We have the utmost respect for Glenstal. They are a great school. They have been at this a lot longer than us. We had to be very strong today and had to be mentally prepared. We have a good, commiteed bunch of lads. They are giving it a lot of time and giving it huge commitment. They were ready today.”

Burke said he was unsure whether the 4G pitch suited Castletroy’s style of play, but was glad the fixture was able to be played.

“If you saw the first half and saw our effective our maul was, we might have preferred a quagmire! But it is a super facility down here,” Mairtin Burke said.

“When the weather is like that, it is great to be able to play matches and get them played.

“I don’t know if that surface really suits us. But the lads played on it as best they could.

“We went into this game as favourites, I suppose, but not too many would have excpected us to get to the semi-final at the start of the year. We will be underdogs for the next one.”