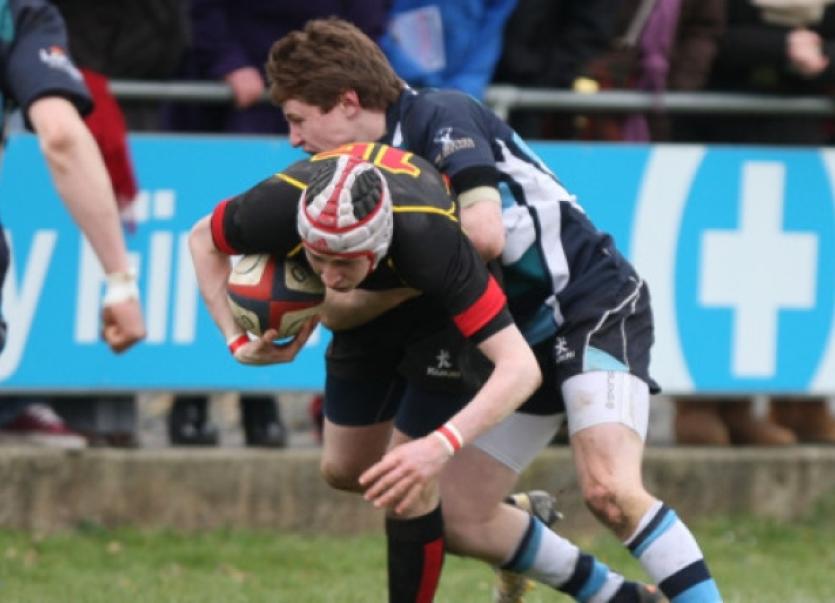 Castletroy College booked their place in the Munster Schools Junior Cup final thanks to a thrilling 7-3 win over Ardscoil Ris on Tuesday afternoon.

Castletroy College booked their place in the Munster Schools Junior Cup final thanks to a thrilling 7-3 win over Ardscoil Ris on Tuesday afternoon.

ALL the scores in this gripping Munster Junior Schools Cup semi-final in Dooradoyle came in the opening half but it was the second period that generated the bulk of the excitement.

Aided by a swift first-half breeze, slight favourites Ardscoil looked threatening, moving the ball cleverly through the pack and using the booming left boot of talented out-half Conor Fitzgerald to get them into good scoring positions.

Fitzgerald got the first opportunity of points on ten minutes but his strike from far out and right of the posts went wide.

Then came the decisive moment of the game. Getting their foot in Ardscoil territory for the first time, Castletroy discarded their defensive mantle, running the ball off a number of rucks before releasing left wing Sean McBrearty, who showed blistering pace, only to be brought down ten mentres from the try line.

The dynamic David Rowsome made the telling yards from the recycled ball and blindside Darragh O’Neill got the touchdown from the final surge. Rowsome was in barnstorming form all day and O’Neill – a stalwart of a UL Bohs underage team that has won back to back league and cup doubles in recent years – is also regarded as an excellent prospect. Along with the terrific Castletroy No 7, captain Niall O’Shea, they proved a formidable back row combination.

Conor Fleming landed the difficult conversion into the wind.

That score, though, brought new life into the Ardscoil attack with Jerry McCabe outstanding at number eight and Jack Sexton gaining ground with a number of carries and there was just reward seven minutes before the break, Conor Fitzgerald reducing the lead to 7-3 with a well struck penalty from 30 metres out.

The second half saw Ard Scoil Ris launch an almost continuous assault on the Castletroy 22 but each time that it looked as if they would be rewarded with a try, they were denied by some magnificent defending.

Twice they were over the line, once the ball was held up brilliantly by a Castletroy, the second time denied by a knock-on.

On a day in which it was a pity that one side had to lose, the manner in which Castletroy College stood up to that second half pressure cannot be ignored.

Towards the end, the ground was gripped with tension and supporters on both sides of the pitch were loud in their support.

As the final whistle sounded, the brave Ardscoil Ris players – vanquished after leaving absolutely nothing on the pitch – slumped to their knees while the Castletroy supporters invaded the pitch and joined their players in a deeply felt celebration.

The other semi-final takes place in Tom Clifford Park today at 3pm when favourites Crescent take on CBC.

The final is provisionally fixed for next Wednesday at Tom Clifford Park.