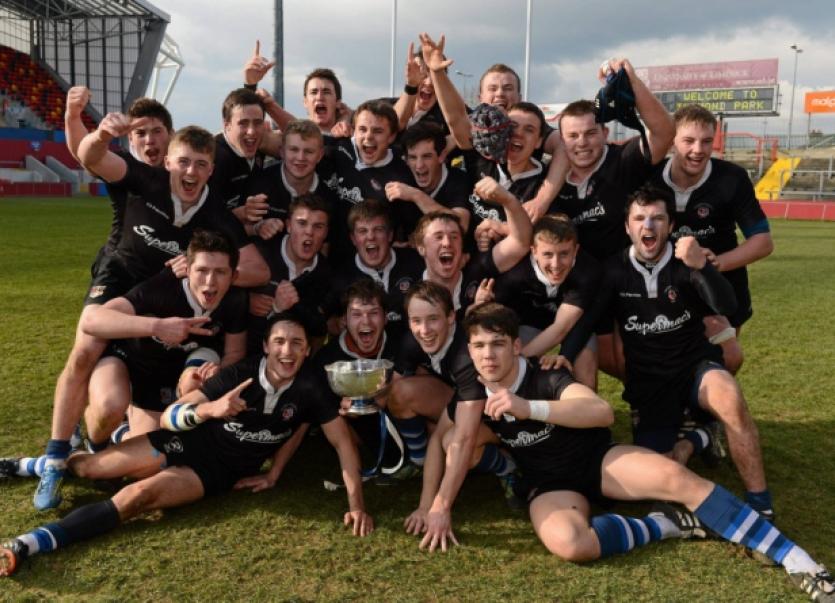 LIMERICK schools will launch a five-pronged assault on the Munster Schools Senior Cup when the opening series of fixtures are played next week.

LIMERICK schools will launch a five-pronged assault on the Munster Schools Senior Cup when the opening series of fixtures are played next week.

Holders Crescent College Comprehensive, who regained the coveted trophy in emphatic fashion last March, will be hoping to produce a stout defence of the Cup. And the Dooraoyle side look well placed to just that.

Ten-time Munster Senior Cup winners Crescent are joined in the last eight of the competition by fellow Limerick sides, St Munchin’s College, Ardscoil Ris, Castletroy College and Glenstal Abbey, as well as traditional Cork powerhouses, PBC and CBC, as well as Rockwell College, winners of the Cup in both 2011 and 2012.

Limerick schools have won the Cup on nine occasions over the past 28 years. Crescent College have been successful on five occasions.

St Munchin’s College, five-time winners of the Senior Cup in all, claimed the title on three occasions over the past 12 years. When Castletroy College won the Cup in 2008, they became the first new name to be inscribed on the trophy in 40 years.

Ardscoil Ris, hoping to repeat their Junior Cup wins of the past decade, and the highly competitive Glenstal Abbey side, perennially boxing above their weight in the competition.

A change in the competition format introduced in 2009 means that the loser’s of next week’s quarter-final, round one, ties will have a second chance to progress to the semi-final stage.

Crescent College succeeded in coming good on the promise showed in winning back-to-back Junior Cups in both 2010 and 2011 when landing the Senior Cup after a 19-year wait last March at Thomond Park.

Head coach, Conan Doyle, who plays in the AIL with Garryowen, will be hopeful that his charges can get their campaign off to a winning start against CBC at Grove Island on Wednesday next, January 29.

Crescent are able to call upon the services of no fewer than 13 members of the squad which overcame Rockwell in the senior final of 10 months ago.

Crucially, Crescent are set to have up to eight starters from that game, the likes of locks Robert Scott, Jonny Keane, prop Liam McMahon, back row Jay Kavanagh, centres JJ O’Neill, who scored a try in last year’s final, and Will Leonard, as well as scrum-half Gary Fitzgerald and winger Jason O’Sullivan in their squad for the opening game against CBC.

Not surprisingly, six squad members played with the Munster Schools U-19 side this season and a seventh, Jack Harrington represented Munster at U-18 schools.

Mike O’Donnell has also been involved with the Irish Schools U-19 squad.

The importance of next week’s opening fixture cannot be overstated. A Crescent win would ensure they remain in Limerick for the quarter-final, knock-out stage.

While Crescent are available at 7/4, Ardscoil top the market at 6/4.

Ardscoil will be expected to get their campaign off to a winning start against Glenstal Abbey at Rosbrien on Thursday next, January 30.

Ardscoil’s talented captain Stephen Fitzgerald is one of nine survivors the North Circular Road side can call upon from the 2013 side which suffered a disappointing exit at the hands of St Munchin’s College.

With an impressive management teams including the likes of UL-Bohemian and former Munster player Mossie Lawler, as well as James Hickey and Enda Gavigan, expect Ardscoil to hit the ground running.

St Munchin’s College look a value bet at 16/1. The Corbally nursery may be sixth favourites in the bookies lists at present, but they boast a terrific Cup pedigree.

John Broderick, who is also a pundit on TG4s rugby coverage, is head coach with St Munchin’s once again, while the backroom team includes Young Munster hooker Ger Slattery - who recently featured in the PRO12 with Munster - as forwards coach, while Shannon’s RFC’s Tadhg Bennett is backs coach along with Eugene O’Brien. No stone will be left unturned in St Munchin’s preparations.

The side is captained by Luke O’Halloran, who is returning to fitness after missing almost 18 months of rugby with a serious back injury.

No fewer than 22 members of the St Munchin’s squad were involved in the senior cup squad 12 months ago. Ben Kilkenny, a nephew of Keith Wood, has played with Munster and Ireland U-19s, while their strong Munster Schools representation includes Emmett O’Callaghan, Peter Meyer and John Foley. For good measure, Luke O’Halloran and Edward O’Keeffe played for Munster U-19s.

Munchin’s have a difficult opener away to PBC on January 29, however.

Castletroy College will be looking to regain the Cup after a six-year break. The Newtown school will be anxious to build on their excellent Junior Cup success of last season.

Two members of the backroom team Martin Burke and John Staunton, were involved in Castletroy’s last Senior Cup win in 2008.

Castletroy are captained by the exciting Jack O’Neill, while Ronan Murphy and Rory Cunningham have been in the Munster Schools squad.

Castletroy will fancy their chances of causing an upset against Rockwell - who knocked them out of the Cup last season in their opening fixture on Tuesday next, January 28.

Glenstal Abbey will look to the likes of representative players, John Healy and Eoin Ruan (both Munster) and Tim Costigan (Connacht) to help them record an upset win over Ardscoil Ris in their first outing.

Front row forward Healy also captains the Murroe side. Aiden McNulty is head coach with Glenstal’s senior side this season.

What are the odds?