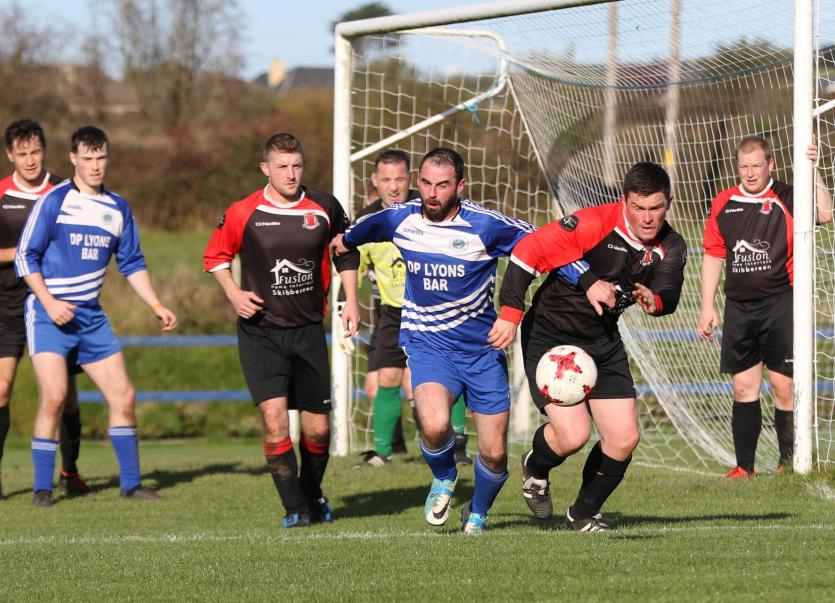 The first Cup Final of the season takes place in Clounreask at 7pm on Saturday when neighbours Broadford United and St. Ita’s meet in the Desmond u-17 decider.

Broadford are the holders, having beaten Askeaton in last season’s Final. Eight of last season’s panel are still under-age, five of them having started in the victory over Askeaton.

Among those seeking their second U-17 Cup winners medal is striker Jamie Keane, who scored a hat-trick in the 7-0 victory away to Mountcollins in the semi-final. The other four goals in that game were scored by midfielder Conor Stack, who also scored the first goal in the 2-1 victory away to Abbeyfeale United in the quarter-finals. The winner in Riverside Park was scored by midfielder TJ Kelly on his return from injury. These three players plus holding midfielder Darragh Ryan and centre-half Jack Brennan give Broadford a very strong spine. Stack is the captain of the side and is the son of manager James, who is assisted by Denis Ahern and Ray Keane.

St. Ita’s are managed by Eddie Carmody, who returned from his stint with Ferry Rangers and is now doing a successful job managing the 16s, 17s and Youths. Carmody is assisted by Seanie Curtin and the side is captained by Ronan O’Connor, who returned to his native St. Ita’s after playing with Broadford u-16s last season. Striker O’Connor scored one of the goals in the 2-1 victory at home to Askeaton in the semi-final, the other coming from Oliver Flanagan. The players who will be trying to win the central midfield battle are Tristan Sheehan and Eamon Carmody, son of Eddie. Carmody is one of three players in the side who also play with the junior team, the others being left-back Ben Mulcahy and left-sided midfielder Shane Harnett. Centre-half Ian Kelly is a key player in defence.

St. Ita’s are a very young side. They are made up of u-14s, u-15s and u-16s and so they are all under-age again next season. That is in contrast to the fact that half of the Broadford panel have the experience of tasting victory in last season’s Final and so I will give the vote to Broadford to retain the trophy after a keenly-contested derby.

Bobby Horgan, founder Chairman of the Limerick Desmond Schoolboys/Girls League, died in July last year. As well as spending well over a decade successfully running the League’s affairs, Bobby was also synonymous with the Foynes club and then Shannonside FC when Foynes amalgamated with Shanagolden. Bobby managed countless teams for Foynes over many years, with a multitude of players benefitting from his coaching and man-management skills. In honour of his contribution, Shannonside are renaming Borrigone as Horgan Park and the dedication ceremony will take place this Saturday at 3pm, after which the current Shannonside FC team will meet players from the past who were coached by Bobby. It is a fitting tribute by Shannonside for a decent and honourable man who served his club and league with great distinction and I’m sure will be appreciated by the Horgan family.

The Weekly Award this week goes to Rathkeale striker, Pa Ahern, who took his tally for the season at this early stage to 12 with his two goals in the 4-2 victory away to Kildimo United. Ahern will go into a draw with the other Weekly winners for a €100 voucher from Adrenalin Sport of Abbeyfeale and Newcastle West at the end of the season.

An EGM of the Limerick Desmond League to decide on a proposal to introduce Calendar Year football will be held in Rathkeale House Hotel on Monday 5th November at 8 pm. All clubs must be represented as per rule. Clubs are entitled to two delegates per junior team and one delegate per youths team.

Naming of Borrigone as Horgan Park

NOTE: There are no games on Sunday 4th November because of an FAI directive that the day be kept clear for the FAI Senior Men, Senior Women and Youths Cup Finals in the Aviva Stadium.