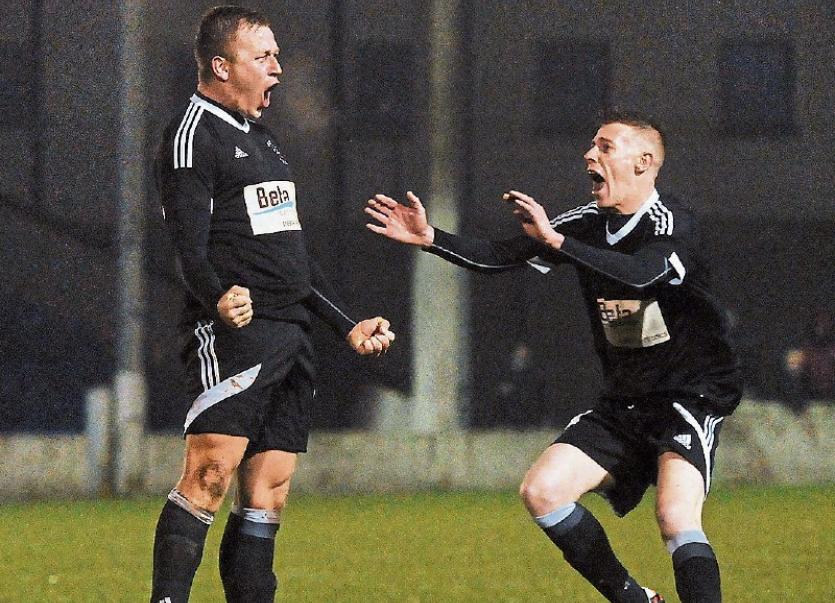 JANESBORO became the first team to put their name on the Munster Champions Cup twice when they came from behind to beat St Michaels in dramatic fashion at Jackman Park on Saturday evening.

Janesboro's goal scoring master and student both delivered in a pulsating climax to the game.

Trailing to Colin Bargary's goal three minutes into injury time, Shane Clarke hit a free kick to the back of the net to send the game to extra time and Keith Mawdsley popped up to fire home the winner.

It was a sign of the character of this Janesboro team. With their confidence knocked following defeat in the FAI Junior Cup in their previous outing, few would have given them hope with 93 minutes played and trailing by a goal.

However the Limerick side went all out for the equaliser and their courage was rewarded with a last gasp leveller.

The view that this competition does not attract the respect it deserves was well and truly put to rest as two of the top side's in the province gave it their all in a real ding-dong battle.

Janesboro captain Shane Clarke was immense in the opening half causing a star studded Saints defence all sorts of problems and watching Irish manager Gerry Davis will have been rightly impressed.

Time and again he won his battles against an International back four, creating numerous chances for his team mates.

His strike partner Keith Mawdsley was having a tougher time against such an experienced defence but like a true striker, he showed his worth scoring the winner, pouncing like a panther when a chance presented itself

That Clarke was denied the man of the match award was not slight on the Captain but a recognition for the effective work and endeavour of his midfielder Mike Ryan. Ryan was superb, his tigerish style upsetting the silky skills of his rivals and it was fitting that he won the free kick to set up the equaliser.

Saints, as always, were a class side but they found the 'Boro rearguard a tough obstacle. Jimmy Carr always looked threatening when in possession while the performances of his team mates Shane Ryan and Chris Higgins will also have been noticed by Irish supremo, Davis.

The action was end to end for most of the game and 'Boro went close to snatching a lead in the opening minutes when Aled Harkin's free kick towards the back post was met by Shane Clarke but he could not force it over the line.

At the other end the home side suffered a scare when Jimmy Carr's shot slipped through the hands of John Mulready but the keeper recovered well to mop up the danger.

Danny O'Neill intercepted a sloppy pass by Paul Breen and sent Clarke away on the wing and his cross found Mawdsley but again the finish was just off.

From a Saints attack a quick breakaway saw Mike Ryan play Mawdsley free on the left. His ball across goal had Clarke teeing up to finish when Higgins arrived on cue to clear.

Mulready was called upon to save well from Ollie O'Driscoll and the former Regional player went close again with an overhead kick that forced the keeper to touch over the top.

'Boro started the second half in the same vein with Clarke forcing a fine save from Adrian Walsh but it was the Tipperary side who took the lead midway through the second half.

A free kick delivered by Joey Mulcahy saw Paul Breen race in from the right to force the ball across the face of goal where Colin Bargary forced the ball past Mulready.

Kevin Murphy was introduced by 'Boro and had an immediate impact with two shots on target both saved by Walsh.

Saints were defending solidly and looked like they might hold out with three minutes of injury time played. Dogged determination by Ryan saw him engineer a free kick 25 yards out.

The stage was set as Clarke stepped up and left Walsh stranded as he powered the ball to the back of the net.

Extra time followed and 'Boro went within a whisker of taking the lead when Lee O'Mara raced onto Murphy's pass and blasted inches wide of the near post with his first touch of the game.

Saint's relief lasted only two minutes, Danny O'Neill gathered inside the opposition half and carried ten yards before firing a low daisy cutter that Walsh could only parry and poacher supreme, Mawdsley pounced to fire home from the rebound.

Saints did try a final rally but Janesboro were not for turning and held on for a memorable win.

*Clubs please note that during poor weather home teams should contact the Fixtures Secretary before 10am on Saturday if they feel their pitch is unplayable.