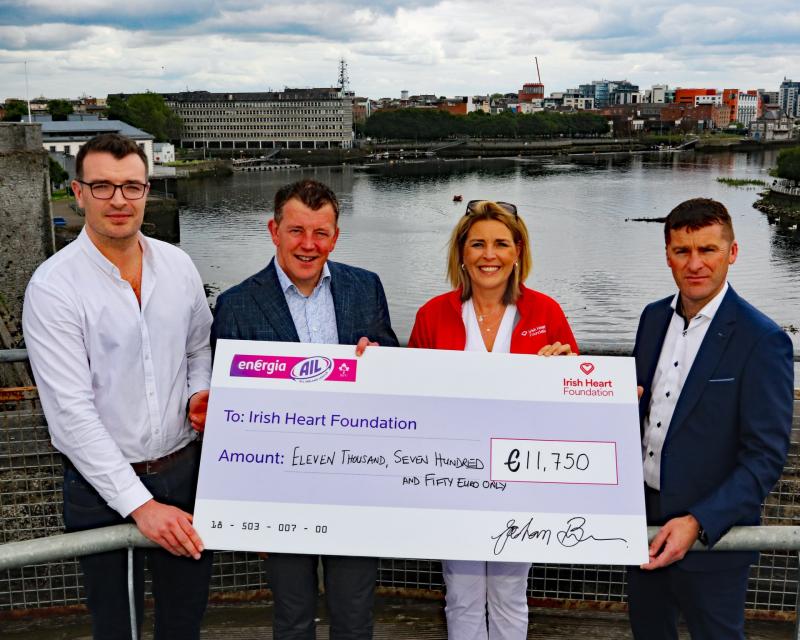 GRAHAM Burns survived a cardiac arrest in October last year, and has gone on to raise €11,750 for the Irish Heart Foundation

On Friday the of October, 22 2021 Graham Burns, a 58-year-old father of three suffered a cardiac arrest in his sleep. If it wasn’t for his wife Karen and sons Ben and Sam, he would not be alive today to share his life-changing story.

On the Friday evening Graham, an active and proud member of UL Bohemians Rugby Club was feeling well as he headed to bed after a full day. He had completed a 5km run that morning and attended a golf fundraising event with his two sons who were home for the October bank holiday weekend.

At approximately 4am in the morning Graham’s wife Karen woke up to the sound of her husband’s heavy breathing. She elbowed him to stop him snoring however, to her horror she realised he was cold and unresponsive.

In shock Karen immediately phoned an ambulance and called out to her sons Ben and Sam, both fully trained lifeguards, who started performing CPR on their dad.

The ambulance arrived in 12-minutes. On arrival, the paramedics took over CPR and also used a defibrillator in an effort to get Graham’s heart beating again. It took four shocks of the defibrillator but thankfully they managed to stabilise him, and he was rushed to University Hospital Limerick.

When he woke up in ICU on the Sunday afternoon Graham had no memory of what had happened and how near he had come to death.

Unfortunately, due to the Covid-19 pandemic, Graham was not allowed any visitors. He had to rely on an emotional facetime call with his family including daughter Emma who had rushed home when she heard the news.

“I just pictured my family going through hell at home that bank holiday weekend. I was on autopilot, but I realised how horrific it was for them,” Graham recalled.

Graham had suffered a serious cardiac event and was fitted with an ICD before being discharged from hospital after a 10-day stay.

Today Graham is doing very well, and his experience has inspired him to raise funds for the Irish Heart Foundation.

With the support of the UL Bohemians Rugby Club and the wider Irish rugby community Graham called on rugby players and supporters alike to wear their old school, university, or rugby club socks at games over the weekend of March 26 to raise money for the Irish Heart Foundation.

To date the fundraiser #rugbyshowssomeheart has raised an incredible €11,750 for the Irish Heart Foundation.

Commenting Graham said: "The response to the fundraiser from the rugby community was nothing short of incredible. Clubs and schools across Munster and further afield really embraced the initiative. In particular, I would like to thank Old Wesley RFC, Highfield RFC, Naas RFC, Castletroy College, Cashel RFC and his own club UL Bohemian RFC for their generous donations to the cause".

"Without the support of The Clubscene Podcast, who promote all things club rugby, this idea simply would not have got off the ground. I am also eternally grateful to Daragh Frawley, Ger Burke and Maurice Hartrey and all associated with the podcast."

Graham gave special mention to Nenagh Ormond RFC for its donation which was organised by Keith Hayes.

"Sadly, Keith was taken from us suddenly and our thoughts are with his wife Deirdre, sons Aaron and Adam, family and friends of Nenagh Ormond. A great club man, who will always be fondly remembered," Graham said.

Reflecting on his near-death experience Graham said he feels incredibly lucky to be alive and coupled with the fundraising drive wanted to raise awareness of heart disease.

"I found it quite therapeutic in the early days talking about it, I felt comfortable sharing it because I have been so lucky, I could have been on my own," he said.

Graham said he would encourage anybody with any concerns about their heart health to get it checked out.

"I am one of the lucky ones. I got a second chance so as a result I want to give something back," he said.