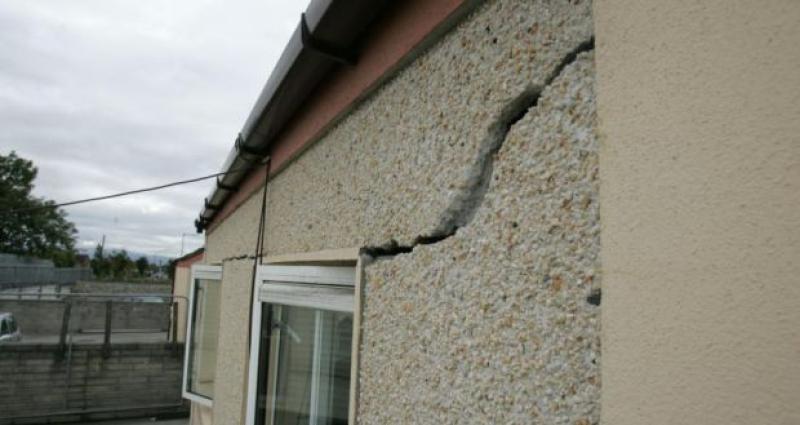 A house with significant pyrite damage

TWO government party TDs -Minister of State, Patrick O’Donovan and Green Party TD Brian Leddin - have yet to declare whether or not they support 100% redress for householders affected by pyrite and mica, according to the Mica Action Group.

Of 15 TDs from six counties along the western seaboard, Minister O’Donovan and Deputy Leddin are the only two who have not put their cards on the table, according to a spokesman for the Mica Action Group this Moonday.

Meanwhile Limerick’s other three government party TDs, Kieran O’Donnell and Willie O’Dea along with Minister of State Niall Collins, have told the Mica Action Group they are backing their demand for 100% redress.

However, Minister O’Donovan, in response to the Group’s claims, says he has been supporting the scheme for 100% redress since 2018, long before many of the “johnny-come-latelys”.

“The most important people are those affected,” he said. “What I have looked for from the start was parity with the original scheme for Dublin and other counties on the east coast. They got full redress. Since 2018 I am looking for what the people on the east coast got.”

Hundreds of homes in Donegal, Sligo, Mayo, Clare and Tipperary have been affected by  the existence of pyrite or mica in building blocks.

An estimated 18 homes in Limerick are experiencing problems because of pyrite according to Ann Ryan, a founder member of the Limerick Pyrite Action Group.

And the Limerick householders are hoping to be included in a government redress scheme. However, the Mica Action Group.

But the Action Group is clear that the redress or compensation scheme needs to be drastically improved. In theory, according to the group’s PRO, Michael O’Doherty, the proposed scheme should meet 90% of costs.

But the reality is that it doesn’t cover demolition or storage  or rental costs while rehabilitation work is taking place and it doesn’t cover any new planning costs. When added to inflation costs, bills of €100,000 are not uncommon.

“Certain homeowners such as those who are retired, on lower incomes or experiencing illness are finding it an impossible task to raise the 10% contribution”, Mr O’Doherty argued.

“Those affected are at their wits’ end,” he stressed, and the group wants the discussions about the scheme to conclude by the end of this month.

The issue of pyrite in Limerick homes is due to be discussed at a meeting of Adare Rathkeale councillors this Tuesday.

In June, Housing Minister Darragh O’Brien told the Dáil that Limerick householders would first of all have to  demonstrate “that the purported issues in Limerick are in fact due to the presence of excessive amounts of deleterious materials (mica or pyrite) in the aggregate used to manufacture the concrete blocks”.

The local authority would also have to quantify the extent of the problem in the area, he said.

“It is not a compensation scheme and is very much a scheme of last resort for homeowners who have no other practical options to remediate their homes,” Minister O’Brien said.