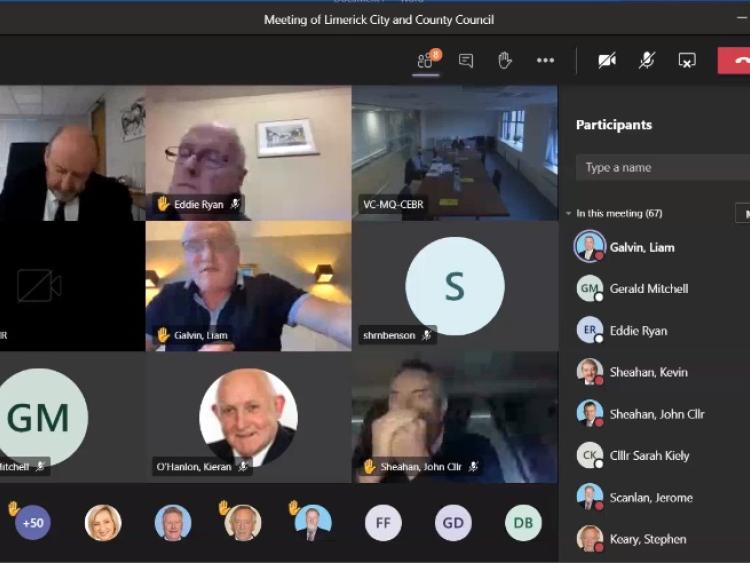 HISTORY was made this Monday evening as all 40 members of Limerick City and County Council met virtually for the first time.

While there have been some virtual meetings and briefings over the past year because of Covid-19, meetings of the full council had taken place at Limerick Racecourse in Patrickswell to facilitate physical distancing.

"Can everybody hear me - give me a thumbs up - okay good!" was how Mayor Michael Collins began as more than 70 people 'dialled in' via Microsoft Teams shortly before 3pm.

Cllr Collins chaired the meeting from the boardroom at City Hall, Merchant's Quay while councillors and officials participated remotely from locations right across the city and county.

Thanks to Mayor @cllrmcollins for chairing our first virtual full Council meeting.

Important that the work of local Govt continues despite the public health situation.

Notwithstanding the cries of “I can’t hear you” “what’s that noise” and “you’re on mute” it worked well! pic.twitter.com/EOkpFZ2Ago

While most appeared to be at home, Cllr John Egan had to make his way to the Kilmallock area office while Cllr John Costelloe had to connect from an office elsewhere in City Hall.

"Welcome to our January meeting, it's a historic occasion, it's our first online meeting of the full council ever to be heard in Limerick City and County Council - we will try to work through the agenda as best we can," said Mayor Collins who set out the ground rules before starting the meeting.

"If everybody can stay on mute and as we progress if people want to speak they can raise their hand by pressing that little yellow hand on your screen," he advised members.

While there were some minor technical hitches and the occasional contribution was missed because a councillor was "muted", the business of the meeting was completed in a little under four hours.

There was heated and sometimes passionate debate about the process to draw up the Draft Limerick Development Plan while there was a more somber discussion about the Mother and Baby Homes report which was recently published.

First ever virtual meeting of the Full Council of @LimerickCouncil

A historic day in that regard but also as we progress the Limerick Development Plan. pic.twitter.com/bDsMgUn8zQ

At the end of the meeting, Mayor Collins thanked everyone for their cooperation and patience throughout the afternoon.

"I'd just like to thank all the members and the executive and everybody that contributed to today's meeting. We got through a lot of important items and I think we had a good debate and everybody got a good chance to speak," he said.