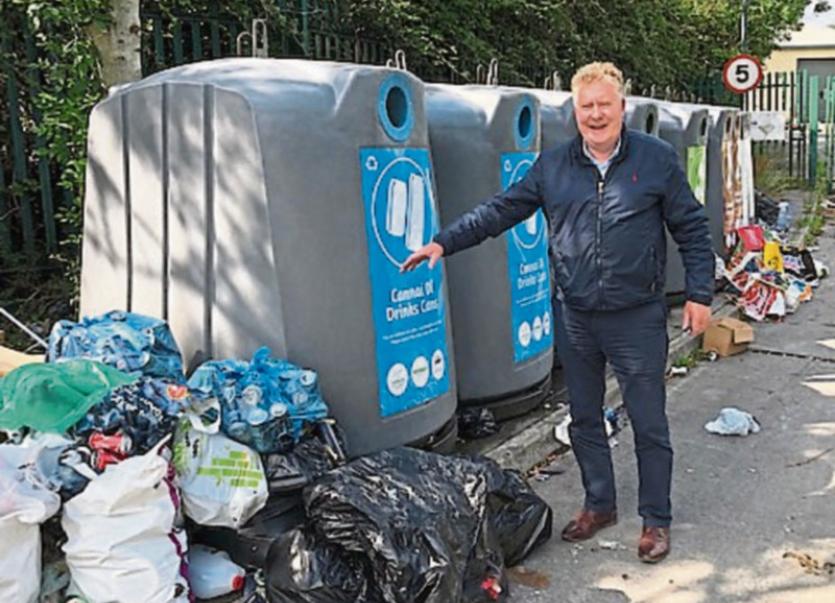 THE Newcastle West bottle bank is being turned into a dump, the town’s newest councillor Tom Ruddle has pointed out.

Photographs which were taken this Monday show bags of rubbish piled up beside the bottle banks which are located close to the Civic Amenity Centre on Station Road. “Everything is just thrown there,” Cllr Ruddle said.

“This is a constant problem,” he continued. “There are supposed to be CCTV cameras in place to prevent this but that doesn’t seem to be the case.”

The cameras, he claimed, were hanging down and did not appear to be working.  “We need to make sure they are in working order,” he said. “The cameras need to be monitored and people who dump rubbish there should be prosecuted and fined.” It was the only deterrant, he said.

The bottle bank at Station Road has previously been a cause of concern for local councillors, who debated a proposal to relocate  the containers inside the council’s Civic Amenity Site in order to prevent indiscriminate dumping. But the proposal was not proceeded with as councillors felt it would make it more difficult for some people to use the banks and Cllr Ruddle agrees.

“That wouldn’t work at all,” he said. People are working during the week and may not be able to go during opening hours, he pointed out. The centre is open on Wednesdays and Saturday, from 10am to 4.45pm on each day.