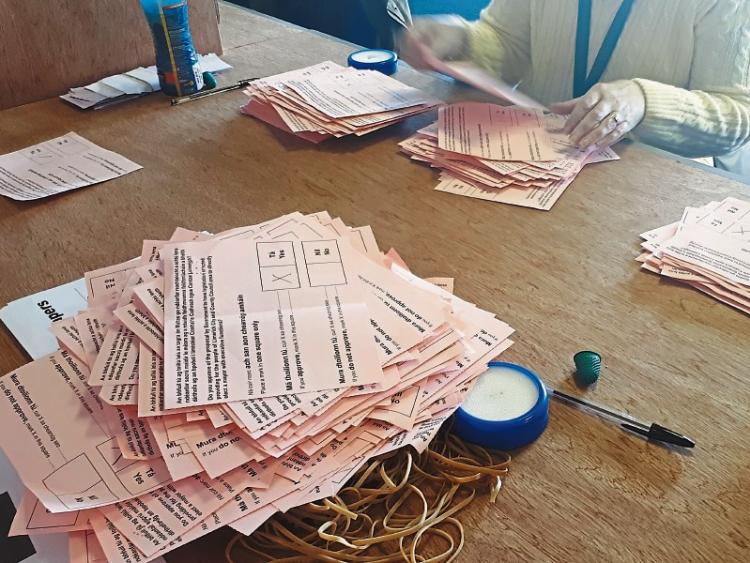 The counting of votes in the Mayoral plebiscite is underway

THE counting of votes is underway following Friday’s plebiscite on proposals for a directly-elected mayor.

The count began at 9am this Monday at the Greenmount Suite at Limerick Racecourse which is the Limerick count centre.

The Greenmount Suite was the venue for plenty of drama over the weekend as it was where the counting of votes took place for the county areas in the local elections - Cappamore-Kilmallock, Adare-Rathkeale and Newcastle West.

There was a turnout of around 50% in Limerick for Mayoral plebiscite meaning more than 70,000 votes were cast across the city and county.

The count is likely to take a number of hours with a result expected around lunchtime.

Speaking at the count centre, Senator Maria Byrne - Fine Gael's director of elections for the Mayoral plebiscite - said while it's too early to call, she hopeful there will be a Yes vote in Limerick.

#WATCH: @senatormbyrne says she's hopeful the #MayoralPlebiscite will be passed in Limerick. However, it's too early to call as the counting of votes continues #LimerickCount pic.twitter.com/HB99LtX6vk

The counting of votes in the plebiscites which were held in Cork City and in Waterford are also taking place this Monday.

No official tallies were conducted over the weekend which means there is no indication as to which way Limerick people voted.

Count staff are ready to begin the counting of votes in the Mayoral plebiscite. I'll have updates across the day #LimerickCount #LE19 pic.twitter.com/Pz10WHBx0E

If the plebiscite is passed, the Government has committed to enacting legislation would could see the first elections for a directly-elected Mayor taking place in Limerick as early as 2022.

Any directly-elected mayor would have some additional responsibilities and would carry out some of the executive functions which are currently carried out by the Chief Executive of Limerick City and County Council.