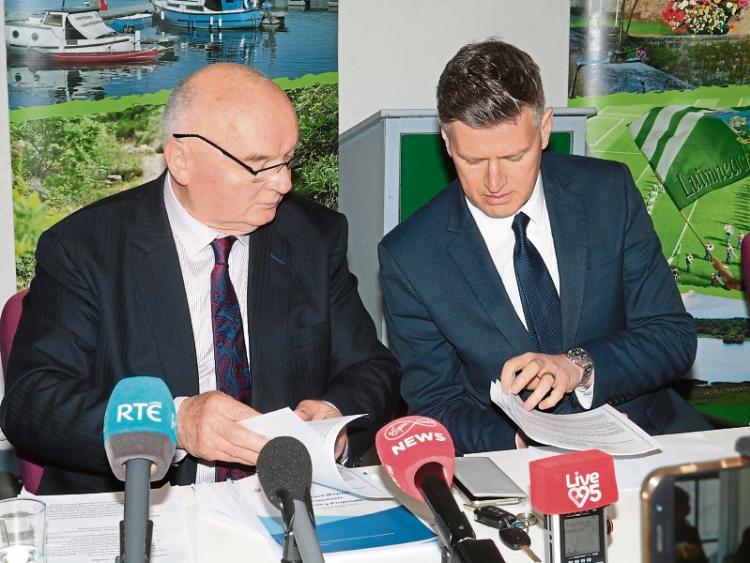 Retired High Court judge Henry Abbott and Barry Quinlan of the Department of Housing, Planning and Local Government at the launch of the information campaign | PICTURE: Michael Cowhey

THE cost of running the office of a directly elected Mayor of Limerick could be up to €450,000 a year it has been revealed.

The committee overseeing the plebiscite, which takes place on Friday May 24, has launched a public information campaign which will see a printed guide – in English and Irish – being sent to every home across Limerick between now and polling day.

At a media briefing this Monday the chairman of the committee, retired High Court judge Henry Abbott, said any directly elected mayor will be paid an annual salary of around €130,000 – the same as a Minister of State.

He or she will be entitled to recruit two advisers and there will be other costs and expenses associated with the running of the office. The committee’s guide states the total annual cost could be anywhere between €313,000 and €450,000 depending on the individual mayor.

The Government is proposing that any directly elected mayor will assume some of the executive responsibilities which are currently carried out by the CEO of Limerick City and County Council. It is proposed that issues relating to human resources, planning permissions and the allocation of housing would remain the responsibility of the council CEO.

Any directly elected mayor will come under the remit of the Standard in Public Office Commission and, nn a first for any political office in Ireland, there will be a ‘recall mechanism’ similar to that which operates in the House of Commons meaning a new election can take place.

“They are answerable to the electorate first of all, they are directly elected and if they have any interest of being re-elected that’s a very serious level of accountability,” said Mr Abbott.

In addition to sending an information guide to homes across Limerick, a public information evening will take place on May 16 and there will be an extensive media campaign across print, radio and online platforms.

A dedicated website has also been set up – www.mayors.gov.ie