'This is what I feel I have been put on this Earth for': Limerick honours Vicky Phelan 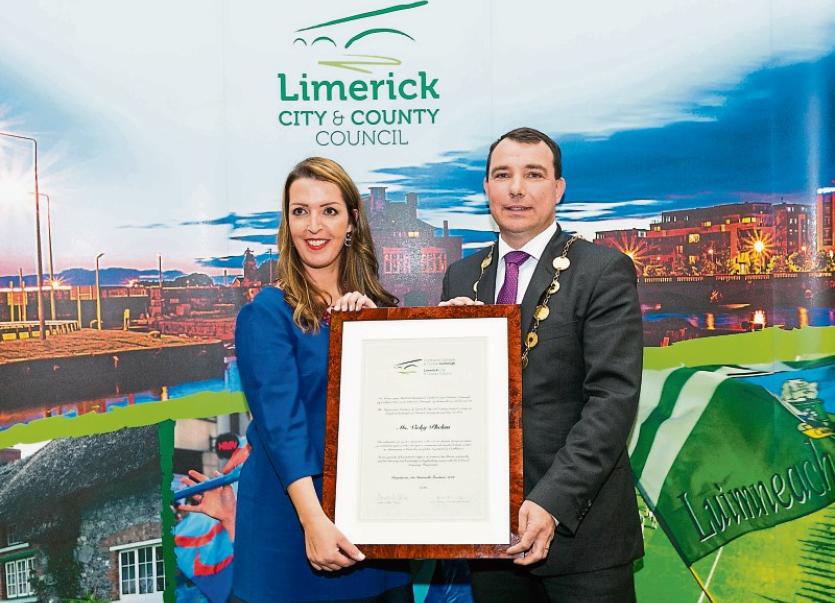 MORE scandals like the CervicalCheck controversy will continue to occur if legislation is not put in place, Vicky Phelan warned politicians at a civic reception on Thursday evening.

Dr Phelan, the woman responsible for exposing the CervicalCheck scandal, was honoured for campaign and advocacy efforts for hundreds of women at a civic reception at Limerick County Hall in Dooradoyle.

Ahhh thanks @LorcallWalsh A fabulous evening was had. Still in my PJs this morning https://t.co/HtywtAJCQV

Before she took to the podium to address more than 60 family and friends from all walks of her Limerick life, Mayor James Collins described Vicky as “our greatest hero”.

Speaking on her campaign activity, Vicky said: “My heart takes over.”

“When you are so passionate about something, it never really clicked with me before. My sister always wanted to be a hairdresser, and I envied her because she knew since she was seven that she wanted to be a hairdresser. I never knew what I wanted to be. I don’t think I ever found my niche. But I have now. If someone told me that this is what I was going to be doing, I never would have believed you. But I certainly feel that this is what I was put on this Earth for.”

Dr Vicky Phelan: “This is what I feel I have been put on this Earth for.”

She described to the audience, carrying out her own research into trial drugs, while being too ill to leave the bed.

She said after she was informed that she had just months to live, she was told “to go home and get my affairs in order”.

“It is an awful indictment on our country that I had to research all the information. Nobody gave me any help. I did it all myself at a time when I was very, very ill. I was sitting at home on a laptop, very sick, not able to get out of bed. But I had no choice.”

She said she is now using her €2.5m High Court settlement and the moneys raised by her community to help fund a position who will research trial drugs for people who are given a terminal diagnosis.

“What I do want to ask, because I have all of the elected representatives here in one place, is that as the Mayor said earlier on—and I am delighted to hear that you support my call—that we need accountability in this country.”

She said that she has not backed a commission of inquiry because she said no one is going to be held accountable for the garda disclosures tribunal.

“In order for that to happen, there needs to be legislation, which we don’t have. That is something I would really like to see happen, and I would really ask all the elected representatives here today to help me to push for that to happen. Because, otherwise, we are going to have scandal after scandal after scandal and nothing will change,” she said firmly, which was met with applause from the audience.

Mayor Collins said: “You faced death and lived with bravery, belief, and a selfless determination to espouse the rights and improve the lives of others. In so doing, you have honoured every citizen of Limerick. I am honoured and humbled as Mayor to be able to afford you this civic reception.”