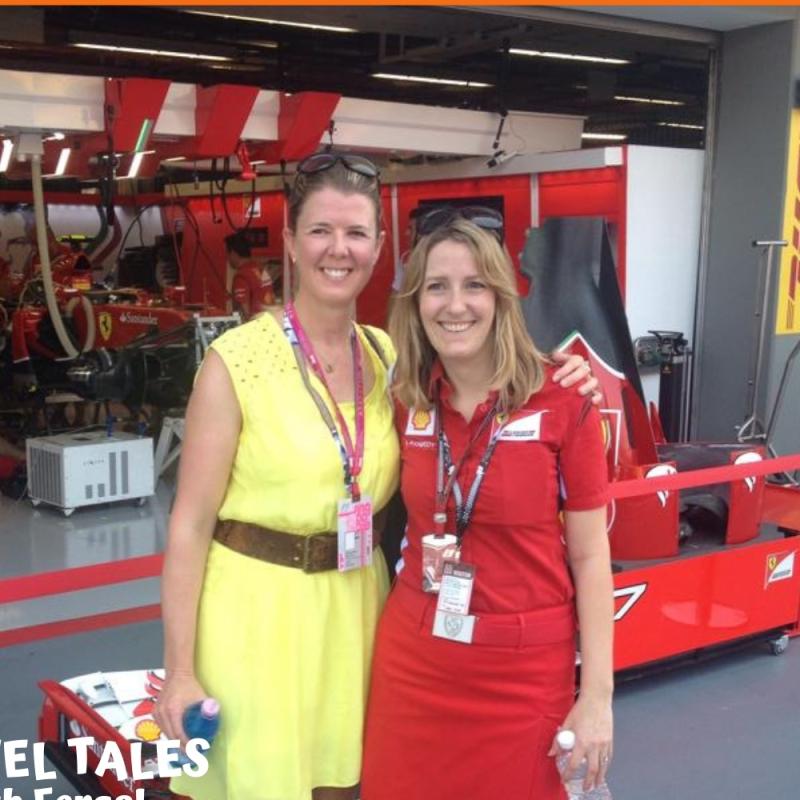 “You're actually in the garage during the race. You're part of all that excitement.  You're under the podium when the Ferrari team wins and celebrating with the driver. It's a crazy world of this traveling circus that travels the world pretty much nonstop from March to November”.

Ireland has a tradition of university graduates emigrating for work all over the world. The Travel Tales with Fergal Podcast guest this week is the international sports marketing Annie Kennedy who left Ireland straight after studying in DCU in the 90’s and has worked abroad ever since.

Annie has had an eventful and high octane career working for EUFA, FIFA, Eurosport, F1 and Shell on the Ferrari F1 team, which has brought her to four continents.

“I'm based in Switzerland. And, and funnily enough for somebody who travels a lot for work all over the world. I've been in Switzerland for 18 years now. But in roles where I'm traveling a lot”.

“I left Ireland, the day after I finished my last exam in my college finals. I left Ireland and I never came back. And it was never planned. Two days after graduation, I moved to France. And then lived in France for three years, lived in London for two years, and I've been in Switzerland now for 18 years”.

Annie worked for F1 in Geneva and then moved to Shell to represent the company on the Ferrari F1 team. “I've had two roles in F1. I worked for the Formula One group themselves. So literally for Bernie and, and that was in Geneva. And then I moved to work for Shell and shell is a is a partner of the Ferrari team. And I was managing that partnership for Shell”.

“I've managed to work with four World Champion drivers Fernando Alonso, Felipe Massa, Kimi Raikkonen and Sebastian Vettel. This is this is a lot of people's dream job. I think it is an incredible sport. There's a real passion for people who are F1 fans”.

“There's a ton of people working on it. We would have up to 25 fuel scientists and engineers in the background developing all these fuels and oils. We could introduce four or five new race fuels and lubricants during a season. But on the ground at the race, we have a team of two to three people. It's a lot of quality control making sure the fuels and the oils aren't contaminated. We'd have a really sophisticated lab in the back of the Ferrari garage. We are actually in the garage during the race. You're part of all that excitement”.

The F1 life on the road “is a calling for people” who are “incredibly passionate” about the sport and lifestyle. But you'd have to, be because to work in F1, you have no life. You've no family life, and a lot of people are divorced, or their relationships are broken up because of their commitment to F1.  It's a work hard, play hard lifestyle”.

“There's a huge amount of glamour there as well. But it’s not the same as the old days. Most of the drivers are fairly sensible. They're really elite athletes and do an incredible amount of training. They need world class levels of fitness to be an F1 driver. But everyone around them does the partying for them”.

Annie has been to all the race circuits and she shares her thoughts on her favourites. “Most people will agree on what their favourite circuits are in F1. It's definitely not Monaco.  Monaco is one of the races that just drives everybody crazy. Because you have the most high-level guests and with everything in Monaco the stress levels are really high”.

“It's really hard to get anything done in Monaco, because Monaco is built into a hillside down by the water. And most of the roads are closed because of the circuit. Trying to organize an event in Monaco is a nightmare”.

“But I would say Monaco is a favourite circuit of the drivers because it's technically really challenging. But it's almost impossible to pass. So, it's not one of those circuits where the outcome can be really surprising unless there's a crash or something”.

“The races that the drivers love are the older circuits like Suzuka or Belgium. The circuits that tend to be preferred by fans are the street circuits like Melbourne, Montreal and Singapore. Because you're right in the centre of a city. You have such an amazing atmosphere and can usually walk to the track and you feel the atmosphere of the city and you can go out at night and celebrate. And then for me the worst place to stay is Suzuka in Japan. Because it's a horrible grey industrial town”

“If people are looking for a tip for a F1 circuit, I would say if you're going to go to any race go to Belgium. The tickets are reasonably priced. It's easy to get to, you can get accommodation within an hour of the track.  And as a spectator, it's an amazing circuit and there's usually a lot of excitement in Belgium”.

Annie shares great tales of working for some of the most memorable football sporting events over the last 20 years including the Euro's in Portugal in 2004. “Portugal was the host country and I don't think I've ever seen so much passion and emotion in my life. They made it to the final and they lost against Greece. I was in the stadium for the final and we were all crying our eyes out. The emotion was just unreal. They'd worked so hard and gotten so far and then lost”.

Annie is currently working for Shell throughout Africa and she tells us on the podcast why that continent has such a special place in her heart.

Fergal O’Keeffe is the host of Ireland’s No.1 Travel Podcast Travel Tales with Fergal which is a weekly interview series listened to in over 70 countries. The Travel Tales and available on all podcast platforms. His website is www.traveltaleswithfergal.ie