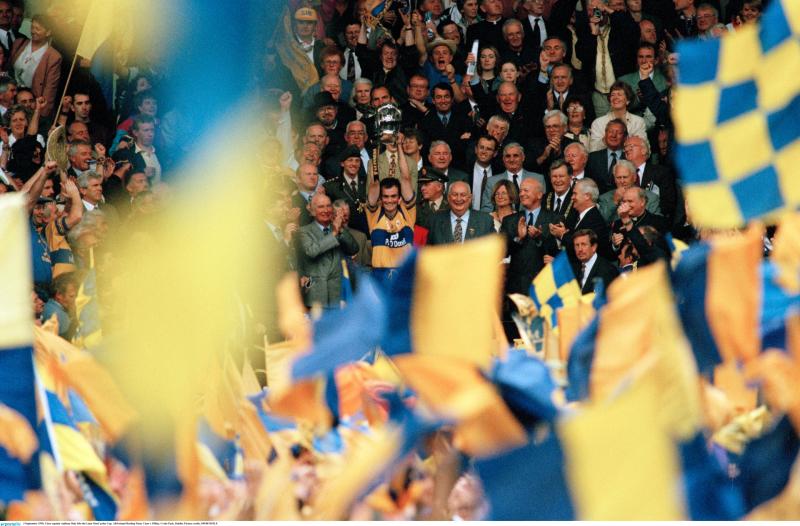 The All Ireland Hurling final in Croke Park this Sunday should be hosting the delayed traditional half time 25th anniversary celebration of the Clare winning team from 1995.  But due to Lockdown restriction they now won’t be able to do it.

Anthony Daly told the Travel Tales with Fergal Podcast this week that he is had been looking forward to the honour of joining his teammates on the pitch for the traditional wave at halftime which even if to an empty stadium this year.  To listen, click here:

“The beauty of the 25th anniversary celebration is that management and players are all still around and if you go through a lot of counties a lot are not able to say that”, Anthony told the Podcast.

“It will be different than planned though. We had great plans made. All through February and March we had planning meetings and some of those meeting turned into great nights. We are a dangerous bunch when we assemble”, Anthony joked.

There was talk of a trip abroad as well but Clare will not be able to get the honour this year but there is talk of Croke Park doing something for them next year.

Anthony has a lifelong of the sport of coursing and he speaks fondly in the podcast of Clonmel where he travels to the National Coursing Meeting every February.

“’We love Clonmel and it is a pilgrimage for us every year. We were blessed. The first dog we brought to the Nationals in Clonmel won the Derby for us.

“My eldest brother Michael had a great interest for the dogs. But I didn’t have much time for it when I was hurling. I’d always go to our own meeting in Clarecastle and maybe sneak a day or two in Clonmel. Maybe get one night. Even Loughnane would allow for that”.

“It was always a dream to buy a pup and have a go for Clonmel. Then for the first one to win every Cup he ran in and to win the Derby was a dream come through. it was the year win I retired from hurling and I ended up winning it on my first attempt in 2002”.

“I remember a sing song in Hearns Hotel the night we won the Derby with Pat Fox, Nicky English and Thomas Mulcahy. Clonmel is great fun but you would need a week off after it to recover”.

“We love the coursing game. I know a lot of people don’t agree with it and they are entitled to their opinion but while it’s legal, we will continue to do it. The dogs are muzzled now. The hares are so valuable to us and we look after them. The hares thrive more in the coursing reserves than other parts of the country and studies have proven that.  So, my attitude is long may it continue. I look forward to going back to Clonmel in 2021”.

Anthony reminisced on the podcast about the glory days of Clare hurling during the revolution years of the 1990’s and told great stories of Clare team holidays and All Star trips to South African, American and Thailand.

The trips away after All Ireland successes were a reward and a real release after a year of hard work but could be boisterous affairs with Anthony telling a story of a near miss in Thailand.

“We were staying in Pataya in Thailand and I had a dangerous enough miss. We were on a Jetski and I fell off the back of mine. Fergal Hegarty and Brian Lohan were on the other Jetski. Lohan told Hego to go over and frighten me in the water. But Fergal lost control and missed my head by about 4 inches. If he had hit me, it was game over”.

“Some of the stuff that went on. We were lucky enough. You just think back and go ‘how did we all come back in one piece. There were a few broken bones with lads doing dives and stuff like that. But we had such a ball”.

The Travel Tales with Fergal Podcast aims to share soul-lifting travel memoirs about day-dream worthy destinations with a special guest every Tuesday talking about their travels, adventures and experiences living abroad.

The Podcast also features other sports people including rugby player Keith Wood sharing a story of sumo wrestling in Tokyo at the last Rugby World Cup. The Podcast also hosted sports broadcasters Con Murphy and Philip O’Connor talking about the Olympics and Winter Olympics. The former Leinster player Damien Browne speaks of his solo row across the Atlantic.

The Travel Tales with Fergal Podcast drops every Tuesday on all podcast platforms and people can follow all his updates on @traveltaleswithfergal on Instragram and Facebook and @FergalTravel on Twitter.