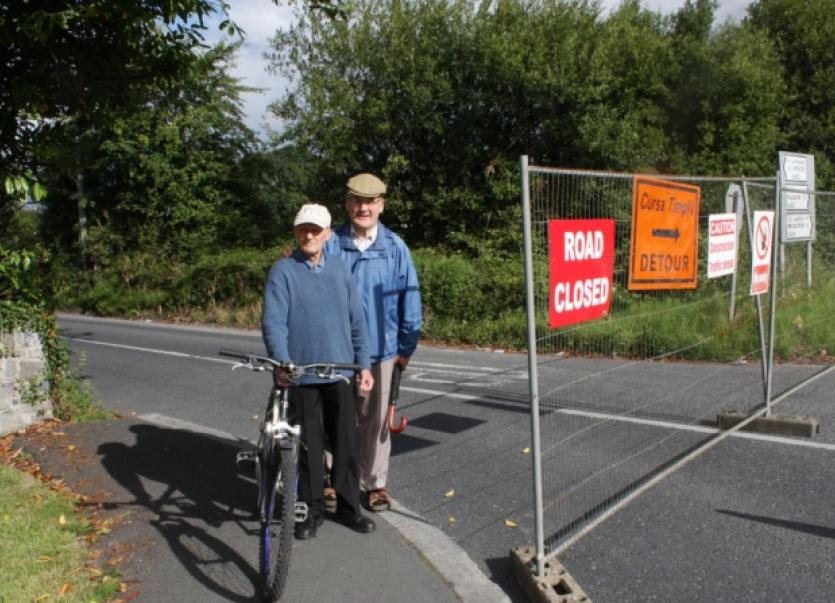 RESIDENTS along a narrow road in Parteen are demanding Clare County Council reduce the speed limit and lay speed ramps to mitigate against heavy goods traffic they say is disturbing their sleep.

RESIDENTS along a narrow road in Parteen are demanding Clare County Council reduce the speed limit and lay speed ramps to mitigate against heavy goods traffic they say is disturbing their sleep.

Eight of the 10 households on Kilquane Drive - a stretch of the School Road from Larkin’s Cross to Browne’s Pub - are objecting to road-widening works being carried out by contractors for Clare County Council.

Mike Naughton, a resident of Kilquane Drive, said he had been “threatened with the guards” by a council official when he attempted to block the road and stop the preliminary works last week.

Local Fianna Fail councillor Cathal Crowe said most of the community were in favour of improvement works on what was a narrow stretch of road serving the local school, a cemetery and the Limerick Blow Moulding (LIMBO) plant which manufactures plastic containers for the dairy industry.

Clare County Council has rejected claims from Mr Naughton’s group that this industry would be the main beneficiary of the road improvements.

“To suggest that the works are being carried out to facilitate any one party is just not correct. They are part of the annual programme works agreed by the council,” a spokesman said.

Mr Naughton’s group contends that panning permission granted for LIMBO in 1998 restricted the movement of heavy goods vehicles (HGVs) to between 7am and 7pm and to no more than six trucks per day. Residents say trucks are accessing the plant “24-7” and have counted up to 29 movements over a 24-hour period.

Clare County Council had told Mr Naughton that these restrictions had since been amended but he has requested documentation confirming this. Efforts by the Limerick Leader to clarify this point with the County Council and with LIMBO were unsuccessful this week.

In an email to the council last December, Mr Naughton wrote:

“Some residents are concerned for their properties due to the number of trucks passing on a daily basis, one who has a property very close to road advises the house structure vibrates with crockery when the trucks pass, another advises that his house vibrates when the shunting truck, which is very noisy is in use.”

The residents had sought the introduction of a one-way system to make their road safer.

Clare County Council has instead authorised major road improvements. Earthworks, tree-felling and other preliminary road-widening works carried out in recent days have cost in the region of €50,000.

The overall scheme - to include resurfacing and the provision of a footpath into Parteen - is expected to cost over €300,000 and to be completed by the end of 2013.

“We had looked for a low-cost solution where a one-way system might have cost you a couple of grand instead of a scheme that’s going towards half a million. Now that 600m of mature trees have been felled and the road is being widened by four metres, we are resigned to the fact that that is not going to happen. But we would like Clare County Council to engage with us to make the road safer in what is a residential area. We feel the council has ridden roughshod over us and didn’t even meet us for nine months from the time we raised it. But we certainly want a reduced speed limit, speed ramps and something done about the hours of operation of articulated trucks,” Mr Naughton said.

Cllr Crowe, meanwhile, said he had lobbied for the works on a road used by school traffic.

“Widening the School Road will make it much safer and easier for vehicles to negotiate. It will be of great benefit not only to Parteen village but also the adjoining communities of Clonlara, Westbury and Shannon Banks,” he said.