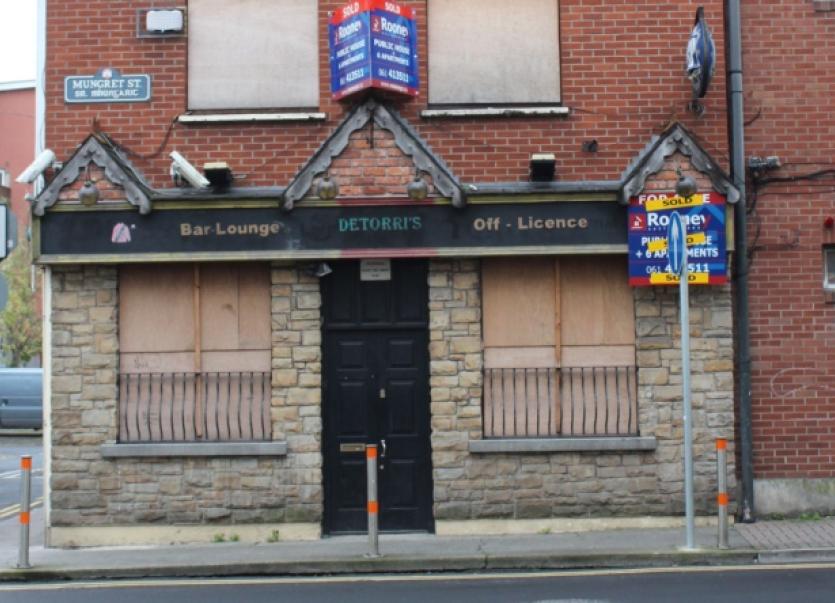 UPPER floors of a closed pub in Mungret Street could be turned into a youth hostel, under plans lodged with City Council.

UPPER floors of a closed pub in Mungret Street could be turned into a youth hostel, under plans lodged with City Council.

Flan Costello, who owns the nightclub in Dominic Street, has signalled his intention to seek planning permission to convert the floors one and two of the former Molyneux’s pub at 68 Mungret Street into a youth hostel.

At present, the building houses the old bar on the ground floor and six self-contained apartments over two floors.

But under the proposals, Mr Costello is seeking permission to construct extensions to both the first and second floors.

Following this, he wants to convert the first and second floors to “youth hostel accommodation”.

No plan is stipulated for the former pub on the ground floor, which closed mid-way through 2010

The building was sold by Rooney’s Auctioneers earlier this year in a receivership sale for just €40,000.

The bar was a famous GAA pub, bought originally by Mick Molyneaux in the early 50s, and given to his son Jack.

Jack, who was a prominent member of Claughan, and his wife Peggy built up the business. The bar was renovated over 25 years ago and was sold by Michael Molyneaux, Jack’s son.

Pat Kearney, Rooney’s Auctioneers, said: “It is a fine modern building, with a bar, an off-licence, a lounge, a kitchen and six bedrooms.”

If the proposals were passed by planners, and the building converted, it would mean Limerick would have its own youth hostel for the first time since 2003, when An Oige in Pery Square shut.

Fianna Fail councillor Kieran O’Hanlon, who represents the Mungret Street area at City Hall, said: “In principle, I would welcome a youth hostel for Limerick City. We want to attract all kinds of visitors and tourists, and people who are on limited budgets to the city.”

“Anything we can do to attract people is welcome,” he added.

Back in 2009, Hirar Properties secured planning permission from City Council to develop a four-floor 85 bed backpackers hotel at the site of the former Globe lapdancing club in Cecil Street. But this project has not seen the light of day.