Don't Mind Me: Everyone loves a good pilgrimage ! 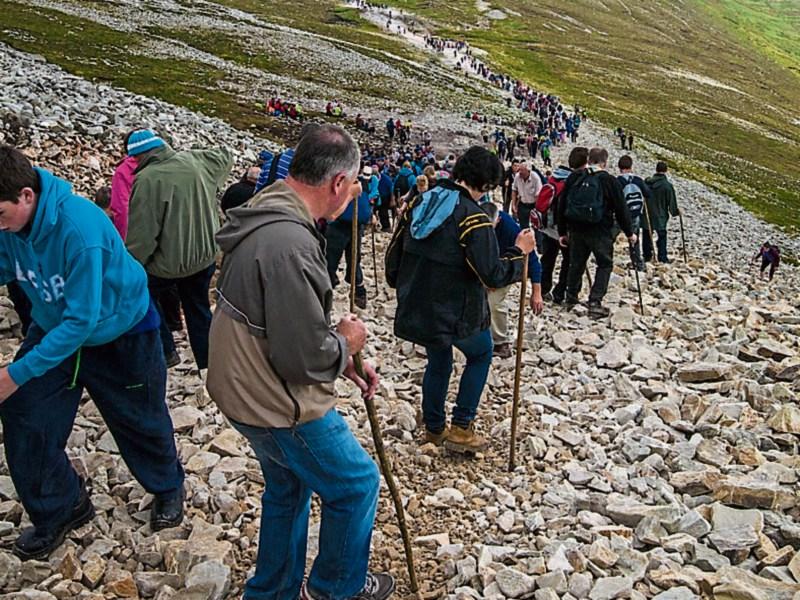 Been there, walked that: Croagh Patrick is on the bucket list of pilgrimages

THE Wild Atlantic Way was a great idea, and so was the Ancient East and Monastic Ireland, but I think it’s time Fáilte Éireann saw the bigger picture and made this country a place of pilgrimage.

It would boost visitor numbers enormously, seeing that the whole world wants to go on a pilgrimage. Actually, it would do wonders for the economy if they just took a leaf out of the book of the Oracle at Delphi.

They’ll say that the climate isn’t right because of declining church membership and advancing secularism, but that’s balderdash. Everyone loves a pilgrimage, although not all for the same reason. For some, it’s an act of repentance or spiritual renewal, or a chance to lodge a petition or seek guidance from on high. For others, it’s just a test of physical endurance or stamina – a bit like running a holy - or even an unholy - marathon.

I wouldn’t mind but we have our own ready-made penitential island on Lough Derg. A three day introduction to Purgatory would surely appeal to a world full of ridiculous mindfulness and weary from over -indulgence. We have a holy mountain to climb that would test the resilience of Don Quixote himself and every parish around here has a holy well, many with curative properties that would appeal to hypochondriacs worldwide. I can’t believe someone hasn’t thought of it before this, even if it does sound a bit like selling our soul.

The trouble is others have got a start on us. Nearly everyone I know has either done, or is setting off to do, at least a part of the Camino de Santiago. At least 100,000 people will follow the Camino this year and the Irish will be there in droves. I don’t know if any of them will even be thinking of St James.

It’s the ultimate human challenge, one enthusiast told me, but the wine is great. I was tempted, but, for me, the ultimate human challenge is having to change a flat wheel on the roadside myself because of the demise of the age of chivalry. The Camino would be a walk in the park in comparison. Anyway, I still regard pilgrimages as occasions of spiritual renewal and repentance, and I wouldn’t want to go staggering into Santiago, tipsy from a surfeit of Rioja. If I’m going on another pilgrimage – and that seems doubtful at this stage of my life - it will have to be to our own St Patrick’s Purgatory on Lough Derg Island near Pettigo. I’m a great believer in supporting home grown products.

This is the height of the Lough Derg pilgrimage season and I was sorry to hear that the numbers attending continue to decline. The nation was never more in need of penitential exercises, and a bit of soul-searching wouldn’t do any harm either. We’re all too caught up with ambition, body worship, gut health and colonic irrigation to see that the real malaise of our time is the lack of meaningful spirituality. If I had my way, I’d send the entire Cabinet on a pilgrimage, at least once a year. I think they all need to be shriven.

I did St Patrick’s Purgatory back in 1972 when I was in my early 20’s and full of the most unsustainable idealism. Everyone believed in Purgatory at the time so I thought it would be a good idea to get some of the suffering out of the way before I passed on. I also think I went to pray for something, but for the life of me I can’t remember what it was. All I know is that when I arrived home, hungry and exhausted, but spiritually replenished, I was confronted with the real mortification when a neighbour declared: “if you don’t get a man out of that, it’s idle”.

I did Croagh Patrick once too, but all I can remember is giving up just when the summit came into view, as a 70-year-old man clambered past me barefooted. Lough Derg was more elemental. The hunger pangs were intense, the sleep deprivation almost unendurable and the cold unbearable. But the camaraderie was heart-warming. The seemingly endless rounds of ‘stations’ performed on bare feet over rocky beds very nearly turned me into a saint. In truth, I was swept along by the communal spirit of fellow pilgrims, some of whom took the liberty of putting smelling salts under my nostrils every time I lapsed into a coma.

People everywhere are crying out for experiences like this. So why don’t we give it to them?