Don't Mind Me: Can the last person to care please vote? 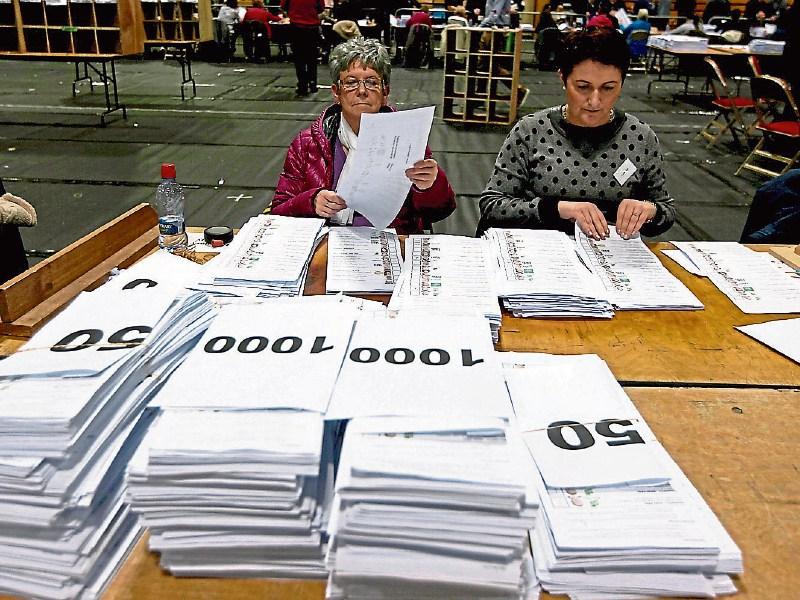 Voter apathy: An Amárach poll, that only 22 per cent of Irish people trust their politicians, national or local shouldn't surprise anyone

THE race is on and I didn’t even hear the whistle being blown. Oh, I knew the Local and European Elections - with a couple of Referenda thrown in for good measure to confuse us - were imminent, but I had been waiting to hear the cuckoo first before getting all hyped up about Polling Day. Then, this very week, two months out from the May 24 poll and before the posters had even gone up on the poles, we had our first County Council canvassers. And I have to say they took me completely unawares. I didn’t even have time to hide.

That will tell you how politically involved I am now. Time was when I’d meet the candidates with a list of questions the length of my arm and a dozen pot-holes to be filled. They’d be disappointed and disheartened if I acted otherwise and I, myself, would feel utterly inadequate and politically detached if I didn’t perform on the doorstep. Now I’m disarmed and I’m certainly not alone in my disillusionment. But at least I’m not like some people who are dismissing democracy entirely and threatening to put hostile ‘No Canvassers’ signs in their front lawns.

It’s all about trust. Or is it? RTE was startled a couple of years ago to learn from an Amárach poll, that only 22 per cent of Irish people trust their politicians, national or local. Our trust in local councillors is so low, apparently, that we couldn’t be bothered campaigning to give them more power, which might actually be in our own interests. All I can say is that we’re a suspicious lot. But I would also contend that it is not a question of trust at all. It’s a question of faith.

We’ve lost the faith because, really, you can only have faith in omnipotence and as far as some of us are concerned, the only omnipotence we’d even acknowledge now is our own. In reality, though, county councillors are currently as far from omnipotent as you could imagine. Their status has been hi-jacked by power-hungry parliamentarians and they’re not as visible as they once were. They can’t even turn up at funerals anymore for fear of some cynic with an agenda of his or her own, questioning their very altruism.

Visibility is a big concern for County Councillors. The recognition factor is weak. They’re not in our line of vision as much as they once were when life was more local and the village ten miles down the road was a foreign land. I think they should make us more aware of their existence, even if it means indulging in a few long distance junkets every now and then, to arouse our ire. As P T Barnum is reputed to have said, “There’s no such thing as bad publicity”. What they need is a whole team of PR experts to project and polish their individual images and imprint them on our apathetic brains. They should take a leaf out of Leo Varadkar’s book.

I have to admit that I’d be hard put myself to name all my local representatives, and in a quiz recently when I was asked to name the Cathaoirleach of Tipperary – my old friend and kinsman, Cllr Mattie Ryan - I was stumped. If I had known that I was so close to the centre of power all the year, I’d have been much more uppity about a whole lot of local issues, including the poxy property tax. Unfortunately, Mattie’s term of office is now drawing to a close.

The funny thing is, I spent most of my working life reporting on the proceedings of county councils in both Tipperary and Limerick and never once did I find it tedious or unfulfilling.

The Council chambers were all, down the years, full of hilarious and irreverent characters, whose ready wit and repartee rattled their opponents, grabbed headlines galore and irked the officials, but never really interfered with their work on behalf of their constituents. Real characters are few and far between in the council chambers of local authorities now and compliance and respectability have played havoc with the
headline seekers.

Nevertheless, these coming elections will be closely watched even by those who have little interest in local autonomy or the lack of it. But I hate to think of the whole exercise being used as a barometer of how the next general election will be fought and won.

It ought to be a different process altogether if we’re to keep faith with it. And Local Government was always more individualistic, more useful and certainly more colourful when we believed in it.