Don't Mind Me: ‘Harry Potter has a lot to answer for’ 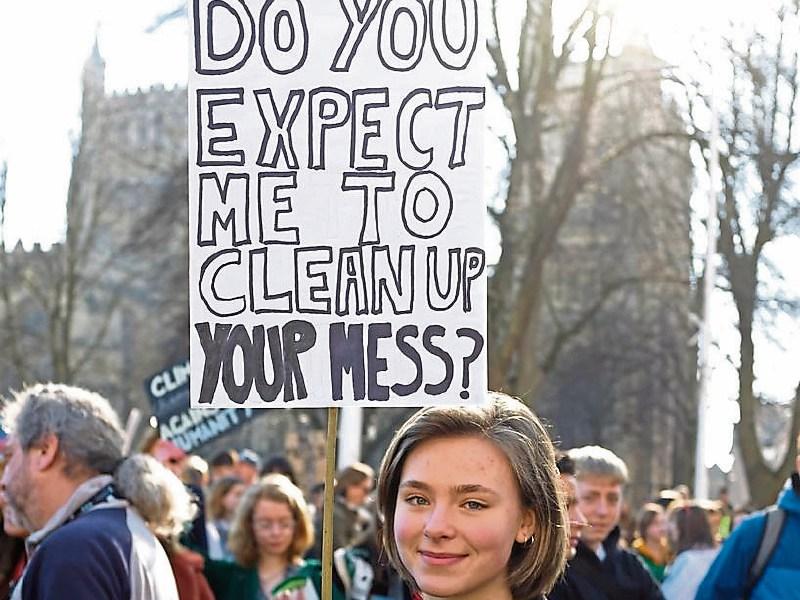 Was the recent climate change protest just another day off school or was it done out of genuine concern for the environment?

MOL an oige agus tiocfaidh si, says the old Irish saying. So that’s exactly what I’m going to do. Despite all my reservations about popular causes and my increasingly curmudgeonly disposition, I’ll swallow my prejudices and laud the actions of the thousands of schoolchildren from around the country, who abandoned the classrooms last week and took to the streets to protest against climate change.

Bully for them, I say. It was a much better idea than jetting off on an annual school skiing trip and leaving another carbon footprint on the Swiss Alps. But I wish they hadn’t been so righteous about their stand. And I wish they hadn’t called it a strike – in deference to their harried teachers who would be crucified by media commentators and public opinion in general if they were the ones who had walked out of the classroom to highlight their ongoing struggle for basic pay parity. Even as it is, it’s the teachers who are now expected to make up for the time lost and get the courses finished in time for the looming Leaving Cert.

On this historic occasion - a world-wide phenomenon by the way - nobody batted an eyelid about the youngsters missing out on class time. Instead the elders were beaming with pride at the civic minded, social conscience of their offspring. After all, wasn’t it we, their elders who had done our damnedest to destroy the planet?

But if we did, then those youngsters have to realise that we did it for them. Where would they be now without their designer gear, their fancy ski suits, their ubiquitous plastic water bottles or their avocado toast that’s currently causing the deforestation of half of Central America? And how would they even survive without their smart phones and their digital gadgets that the experts now predict will leave a bigger carbon footprint than that of the entire aviation industry?

Nevertheless their youthful idealism on behalf of this doomed planet was touching and their enthusiasm was heartening, if not infectious. The trouble is that none of the marchers came with a single sensible or workable plan to save the planet or to reverse the extreme weather conditions that are currently freaking us all out. No, they want us oldies to do something about it, or at least be gracious enough to hang our heads in remorse.

But that’s not what the march was about, you may say. It was about raising awareness and making us and the powers that be sit up and listen. More pertinently it was about making the rest of us feel guilty about our careless, wanton ways, beat our breasts and say ‘mea culpa’. “OUR KIDS HAVE PUT US TO SHAME” one headline announced.

Now I don’t know about you, but I’m weary of young people preaching to their elders and condemning our choices as if they’d have done otherwise themselves in this increasingly materialistic world. If some of them had their way, we’d have to sit a driving test every year after the age of 60 while they went shooting down the motorway close to the speed of sound on their 18th birthdays. And we’d all probably have to surrender our free bus passes because of the massive fuel consumption involved.

All I can say is that Harry Potter has a lot to answer for. Young people reared on a diet of anti-adult Hogwarts propaganda think they know it all and can’t wait to rule the world themselves. Good luck with that, kids! The latest is that they want to be given the vote at 16 and I’m not sure if I can handle all the teen power that would ensue. I didn’t get the vote myself until I was 21, and as far as I can make out, the world wasn’t any the worst for the delay.

For all that, I’m a great admirer of the younger generation of today and I’m touched by their concern for the fate of humanity. I’m impressed by their commitment and by their ability to get themselves heard above the cacophony of competing demands in the modern world. I’m particularly impressed by their ingenuity in being able to escape from the classroom for a whole day and get together with friends and contemporaries for a march in the capital, while winning the esteem and adulation of the nation at the same time.

I have to say, we’d never have thought of that in my day, and I don’t know whether it was because no-one would listen to us or because we were too busy colluding in the destruction of the planet.