Don't Mind Me: Less is not more in the health game 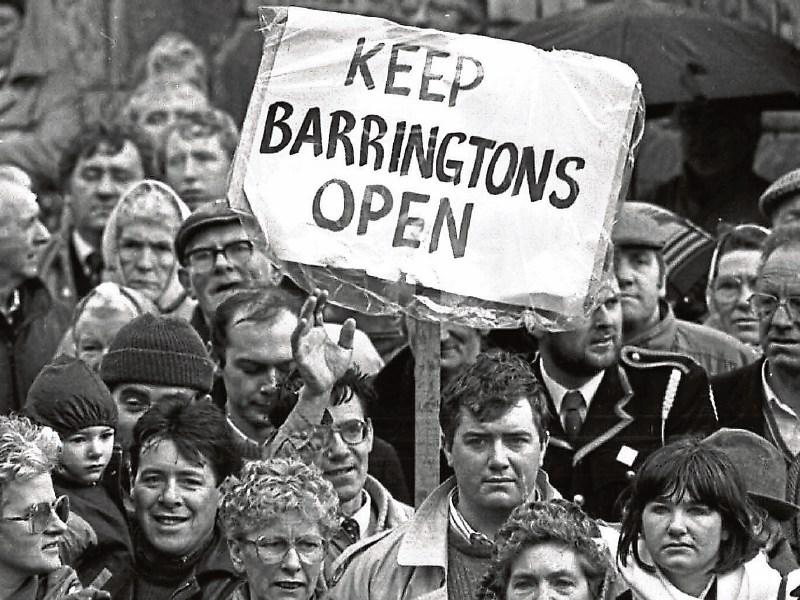 Over 20,000 people took to the streets in December 1987 to protest the planned closure of Barringtons Hospital

AAH HERE now! What’s this about a hold-up in providing the promised 60-bed extension at Limerick University Hospital?

We’ll be dying on the side of the road soon – as opposed to expiring on a trolley in a hospital corridor – if they don’t make more room for us urgently and give us a roof over our heads when we’re sick.

Ever since they peremptorily downgraded two perfectly good hospitals in Ennis and Nenagh in the mad pursuit of a centralised health ‘excellence’, some of us have been living on a knife edge. We’re not even sure if we’d make it to Limerick in an emergency and even if we did, we couldn’t be sure of getting out of the ambulance in time.

On top of that, it must be a real pain in the butt for the good folk of Limerick to have their main hospital invaded by aliens from Clare and Tipperary, leaving them without a bed to lie on. Bizarrely, some Limerick people now have to travel out to Nenagh and Ennis to attend a clinic or to find a bed. Does Simon Harris have any appreciation of provincial territorialism, loyalties and sensibilities?

There is, nevertheless, one healthy outcome to the sorry fiasco. We’re all on the same side now. We’re all feeling short-changed throughout the region as far as the availability of hospital beds are concerned.

The Clare TD Dr Michael Harty nailed his colours to the mast and voted no confidence in the Health Minister in last week’s debate. But where were all our other public representatives from the Mid-West when the opportunity arose to cry ‘foul’? Even one of the most stalwart Fianna Failers, Willie O’Dea, risked his political future once and voted against the closure of Barringtons Hospital which served Limerick city and its environs very well. Are 60 extra beds at the Regional not worth fighting for now or has Brexit emasculated us all?

What I really want to say, however, is “I told you so”. Except that I’m not the only one saying that. Several years ago when they were winding down services at Nenagh and Ennis hospitals, we told them that Limerick would never be able to cater for the extra load – especially after the demise of Barringtons as a public hospital. But we were assured by the policy makers that Limerick would be expanded to meet whatever demand would arise. We’d have a centre of excellence on our doorstep and we’d all be welcomed with open arms even if we had to travel from Templemore, Lorrha or the remote Loop Head Peninsula.

I don’t know if we’ve all became more delicate in the meantime or if overworked GPs are taking no chances and are now referring everyone to A&E, but the bottom line is that University Hospital Limerick is bursting at the seams and can’t cope.

We got our centre of excellence alright, but all we want now is a bed and it looks as if we might have to make do with a field hospital if the funding for the additional 60 beds doesn’t materialise. No offence to Limerick, but some of us who live out in the sticks are terrified of being sent to University Hospital Limerick. The last time I visited my GP, I sat in the waiting room beside an elderly man who vowed to go home and die if his doctor referred him to the ‘Regional’. “Anyplace but the Regional,” he yelled, when his turn came to be seen. “He’s right too,” another patient said. “I’d rather go to jail myself.”

Now, it seems that the extra 60 beds are still on the menu, but instead of being completed this year as promised, it will be at least 2020 before they are available – and even that depends on funding being sanctioned. Hopefully, the population of the Mid-West will hold up in the meantime – despite the dire shortage of hospital beds. There were 69 patients lying on trolleys in the Regional when the delay was announced last week.

The funding would be found if the region’s Dail representatives stood together for the good of its people regardless of the national interest. Ultimately, the national interest is focussed on Dublin and that’s how it has always been since Henry 11 granted the Capital its first charter in 1172 - and a fat lot of good it has ever done for the rest of us.