Don't Mind Me: Finding a few bob for the nurses? 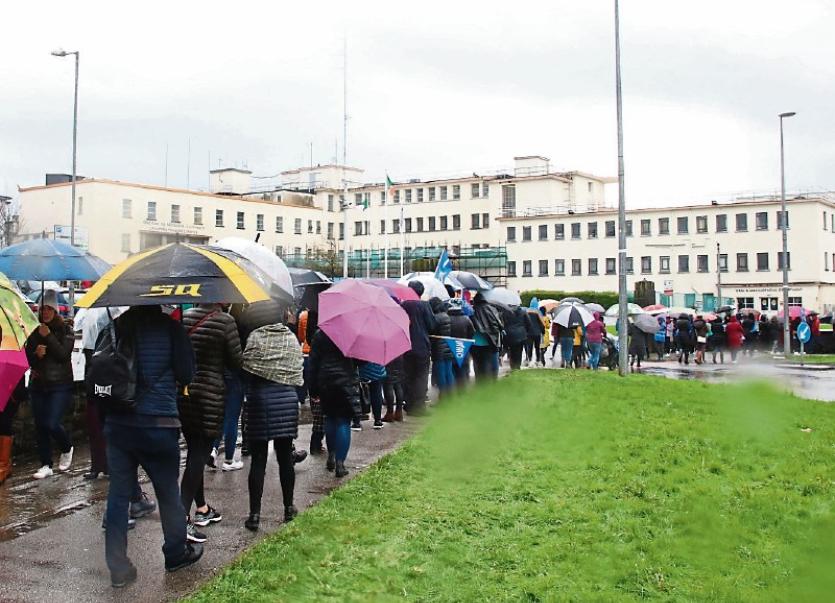 THE nurses strike may well be over by the time you read this, but it was heartening nonetheless to hear that the country backed them - if not to the hilt, then as close to it as could be expected. If I were an optimist, I’d be hopeful that a whole new era in industrial relations is opening up in this country. The trouble is, I’m not.

Whatever you do, don’t get any ideas about us having gone all ‘Bolshie’ in our new found maturity. We still harbour a strange attitude towards industrial action, just or unjustified. I think it might have something to do with our post-colonial aristocratic notions and our even less edifying post-revolutionary begrudgery. Maybe it’s just that we don’t like to be inconvenienced by any cause whatsoever.

We didn’t, for instance, back the Dublin tram drivers in their dispute for better pay and conditions. We regarded their action as ‘holding the country up to ransom’ – whatever that means. When teachers walked out of the classrooms for a day last year to highlight their equally just case for pay parity, the nation was appalled at what was widely seen as undermining the kids’ human rights to education, notwithstanding the fact that most of the kids were delighted at the chance of an unexpected break. I gave the whole of my schooldays, praying for a teachers’ strike, but it never materialised. Teachers obviously had much better pay and conditions and an awful lot more status in 1960’s.

There was a bus strike once when I was Inter Cert, but a fat lot of good it did me as far as getting a couple of days off was concerned. It’s not that I’m a rabble-rouser now, or anything like it, but I think we all need to educate ourselves on industrial relations and the role of Trade Unions in a democracy. We can’t just pick a popular strike to support. We need to find out once and for all what they really mean by collective bargaining. We could start by getting rid of every HR department in the country or at least re-naming them. The term ‘Human Resources’ is loaded against the workforce and quite honestly, while it only came into being in the latter half of my working life, being described as a human resource always made me feel like a lump of coal.

Then maybe we could introduce the subject of industrial relations in our schools tentatively, of course, until we know what we’re doing. We could cut out all this mindfulness malarkey in the classroom. There would be no need for mindfulness if workforces everywhere were treated with respect and fairness and felt appreciated.

Finally, we should all stop referring to strike action as ‘a weapon’. Such war-mongering has no place in industrial disputes unless we can also refer to FEMPI a time-bomb. At the end of the day, conciliation is much more apt. We need to remind ourselves that nobody picks up a placard and walks away from the job to join a picket line, just for the fun of it. Strikers are human beings with a grievance who will suffer much more than the ‘inconvenienced’ masses.

Unfortunately, we were never really great advocates of workers’ rights in the first place. As I said a couple of weeks ago, slavery is in our purer Celtic genes. Despite our sudden penchant for historic commemorations, we’ve consigned the Spailpin Fánach to a place in our memories where even Freud himself couldn’t hope to delve. Who wants to hear about the notorious ‘Hiring Fairs’ and who cares if many of those who were out in 1916 were even more vociferous in 1913, railing at the starving workers because the trams weren’t running and they had to walk to work. Even now, if some of us had our way, the workers would still be locked out and the poorly paid army, who are legally restrained from striking, would be called in to keep the cogs of industry in motion.

Amazing then that the nurses, against all the odds, won such widespread public approval for their action! They managed to convince us, not only of the justice of their cause, but of the prospect that we’d all end up languishing unattended on a trolley in a hospital corridor if nobody wanted to be a nurse anymore. Hopefully, they’ve also helped to mitigate our striking prejudices once fuelled by American anti-Communist paranoia and inspire our leaders to diffuse the time-bomb that is FEMPI.

But let me, before I conclude, pay a tribute to the doughty and eloquent leader of the INMO, Phil Ni Sheaghdha. ‘Phil for Taoiseach’ is my new motto.