Don't Mind Me: My chionophobia is ‘snow’ joke... 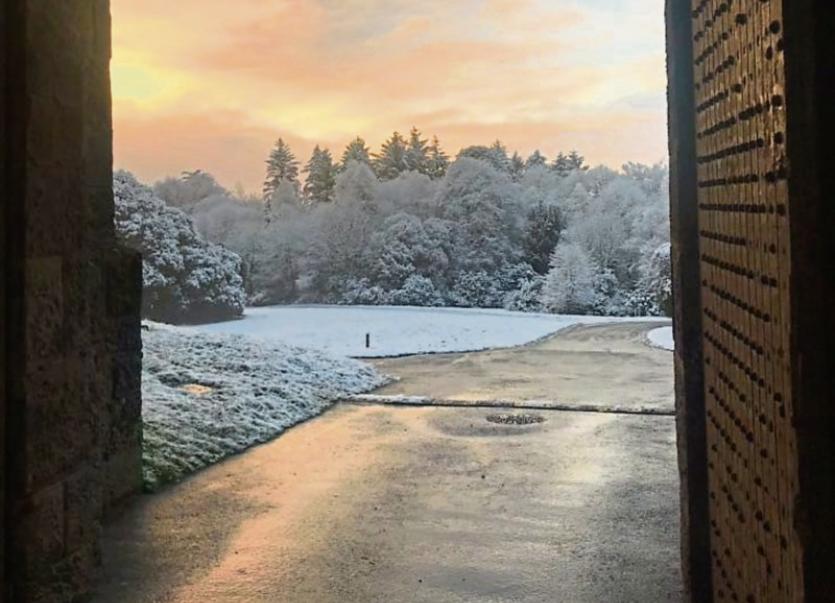 Chionophobia is the extreme dislike or fear of snow. The word originates from Greek ‘chion’ meaning snow and ‘phobos’ meaning fear. Pictured is snow at Glenstal Abbey last week

ANOIS teacht an Earraig! Whether the new calendar purists or eco warriors like it or not, St Brigid’s Day is over and spring has officially arrived, albeit in a bit more than a flurry of snowflakes.

Now, nothing freaks me out as much as the sight of a snow-covered landscape in early spring and the complete absence of birdsong after a couple of weeks of waking up to an unseasonal dawn chorus and rows of dancing daffodils. It was ominous, to say the least.

I opened the curtains and peered out into the stark and silent whiteness and I thought the sky had fallen in on me. My chionophobia, as well as my cursed Celtic genes began to surface. The fearless Celts had an Achilles heel, by all accounts. They were terrified that the sky just mightn’t hold up. I know exactly how that feels, especially when it snows.

I don’t know what caused the affliction in the first place, but snow makes me break out in a cold sweat. I wouldn’t mind but I revelled in it when I was a child. I stayed home from school to make a snowman and even ate some of the stuff once in a fit of bravado. When one of my daughters recently complained about her disadvantaged childhood when there was never enough snow to make a snowman, my heart went out to her. But it didn’t do anything for my own condition.

Obviously I’ve never been anywhere near Antarctica or the ski slopes of St Moritz, although some people tell me that the only way to cure a phobia is to confront it. The trouble is it might kill me.

I was a secret chionophobiac for years, plagued by an obsessive interest in meteorological reports and weather charts. Warnings of ‘significant amounts of snow’ on the way induced panic attacks and even reports of ‘light dustings’ were enough to make me uneasy. When others scoffed at my fears, I reminded them that one person’s snowflake is another’s avalanche. They thought I was mad. The only reason why I’ve come out now is that I’ve read somewhere that Barack Obama has an irrational fear of snowmen. Personally I suspect that the ex-President might be a latent chionophobiac.

Now if Donald Trump announced that he was afraid of a snowman, they’d be calling for his impeachment. And the world would be rocking so hard with laughter that there’s every possibility that the sky might finally fall in on us. Mr Obama, however, has made chionophobia respectable, if not quite admirable and praiseworthy.

The question I want to ask this week, however, is this: what can a choinophobiac do to help fight climate change? My only beef is with snow and my gut feeling is that, however much it affects me, it must have some use in the universe apart from providing a decent piste for the jet-setters, a memorable childhood or an incomparable ending to James Joyce’s “The Dead”. If I had my way, we’d never have to experience another heavy snowfall or grab a single falling snowflake and wonder at the intricacy of its design before it melted on the hand. I’d be free at last, but I doubt if the world would thank me. Nevertheless, I’d live on lettuce and home grown runner beans for the rest of my life and fit into Cinderella’s carbon footprint if I thought it would help keep the likes of the ‘beast from the east’ at bay.

I’ll draw the line, however, at becoming a key-board warrior. The climate was changing long before we set out on the path to a carbon fuelled globalisation. After all it’s only 80,000 years since Ireland experienced its last great ice age, and we still don’t know what caused that –certainly not belching cows. Without doubt however, human activity is causing quite an upset in the atmosphere but it’s hard to fathom how serious we are about trying to counteract that and return the elements to more predictable and less tempestuous activity.

All we know for certain is that the climate change issue has become loaded with vested interests. Mine is nothing more sinister than a snow phobia.

For all that I was somewhat entranced this year when the daffodils started blooming before the crocuses. I don’t have any snowdrops, naturally, and for all I know they could have been blooming at Halloween. As I said, I woke every morning in early January to the joyful sound of birdsong. But I’d be telling you a lie if I didn’t admit that the question on my mind was the very one that Donald Trump tweeted last week as temperatures started plummeting to minus 60 degrees across the American mid-west: “what’s going on?”.