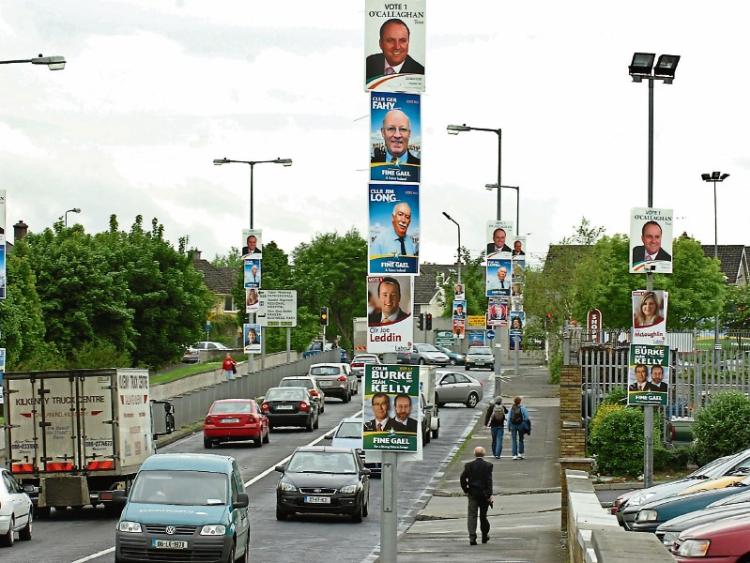 Sign of the times: Patricia wonders how much voter apathy will accompany this year's local elections. Pictured above is the Childers Road littered with posters

I HAVE a few things on my mind this week, but, to be honest, all my efforts to blend them together in order to fill out the space allotted to me have been in vain. They’ve resisted the process like the assortment of fruit that emerged as cement blocks from the ‘Nutribullet’ my daughter gave me for Christmas two years ago, and which I thought I had just mastered last week.

So I’m going to have to stick to one theme – the upcoming local and European elections. I don’t know from Adam how I’m going to hold your attention for a whole column on that one, but here goes anyway.

The thing is I’m not one bit excited about May 24 and that, in itself, must signify something because usually I love an election.

Maybe, like most of the country, I’m just suffering from polling booth fatigue – worn out from casting the ballot. Surely we need at least one full year of respite without having to go to the polls again!

Why can’t everyone be like Leo Varadker and Micheál Martin and just keep going on their own without dragging us all out to vote again?

Now, although I’m married to a farmer, who never stops ranting at EU regulations but at the same time is firmly convinced that without Brussels we’d all be doomed, I have no interest whatsoever in the European elections. It’s been an awful long time since I’ve even seen an MEP in the flesh and I can’t even remember when I voted for one. Such anarchic sentiments should not, of course, be harboured by any civic minded citizen. Democracy was hard won and it’s all we have.

The local elections, on the other hand, used to be different, invariably creating great excitement particularly in rural Ireland. But now that rural Ireland is dying, the excitement has naturally abated. Come to think of it, I don’t know when I last saw a county councillor either. They don’t court us the way the used to and some of them don’t even attend funerals of people they don’t know anymore - for fear of giving the wrong impression. The bond is in bits, as far as I can see.

Maybe that’s why it gave me great heart to see Deputy Shane Ross, of all people, donning a Santa hat and jumping over fences to try to connect with his constituents at Christmas and the New Year. I didn’t even get a Christmas card from any of mine. Okay, okay, when they did send me Christmas greetings by free post, I was always giving out about the misuse of taxpayers’ money, but that was because I had nothing else to write about in the gloomy post-Christmas days. What’s new?

Also, to my great shame, I have to say that I miss the days of rampant clientelism and cronyism when you go to a county councillor and ask him to do something for you without risking his or her political career, or neck for that matter. Sometimes it worked, and sometimes it didn’t, but that was the way of things. Of course, in hindsight, it looks despicable, but to the multitudes who felt dispossessed for one reason or another in post-revolutionary Ireland, it felt strangely appropriate.

The trouble now, however, is that local authority members have little power, legitimately or otherwise, to do anything for anyone. As far as I can see, we might as well be electing honorary mayors and honorary figures to represent us for all the power they wield. In my humble opinion, all the great promises to reform local government over the years were aimed at inflicting as much impotency as possible – unless you’d call village and street landscaping a measure of local autonomy, or regard self-importance as a sure sign of self-determination.

For all that, some of my best friends were county councillors, and the memory of those friendships may yet entice me out to vote on May 24.

I’m thinking especially of those who tipped me off when the scent went cold and my nose for news wasn’t always as sharp as it should have been and those with whom I once went on a wine-tasting tour of Hohenlohe. My good wishes go particularly to those who are retiring this year, including Cllr Noel Gleeson of Cappamore, a gentleman of the old school who rescued me from many a scoop-less desert. To those who are aspiring to more powerful corridors, my good wishes go too, including Cllr Eddie Ryan of Galbally, who offered the hand of friendship when I once went on the warpath over the crows.

Even without the autonomy, they still managed to serve us well.