Don't Mind Me: My search for the gaudiest lights ever and decorations imaginable 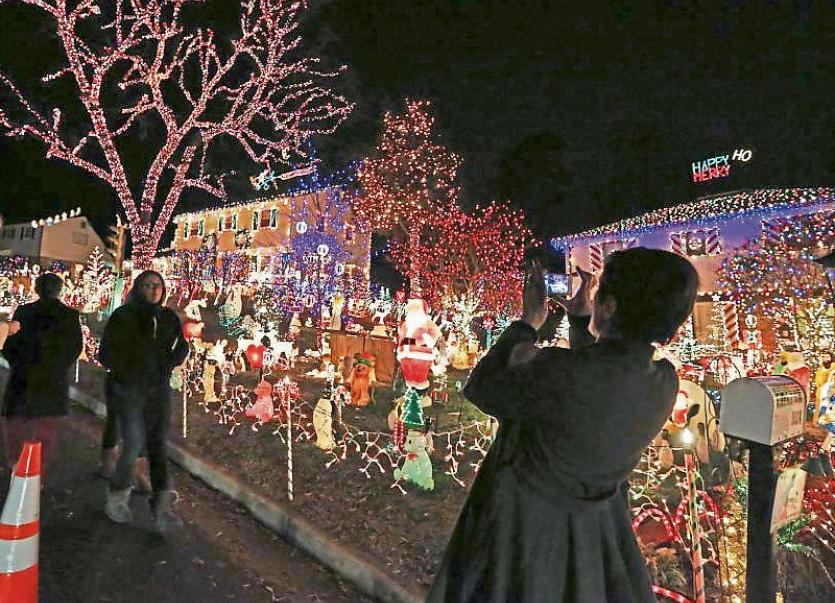 Just how many is too many Christmas lights?

IDON’T believe it! Just when I thought I’d indulge in an ostentatious Christmas this year with buckets of bling and glitz galore, I’m told it’s passé. Well, if it is, then will someone please spread the news because I can’t even drive down to the town these dark evenings without being dazzled by multi-coloured garden galaxies. I can’t even make out the Star in the East anymore.

Just last week, a giant reindeer appeared in a neighbouring garden and for one panic stricken moment, I thought I’d left the gate open and one of our cows had escaped, jumped over the fence and mangled someone’s lawn.

But ‘if you can’t beat them join them’ is my new motto. So I went off and invested in the gaudiest lights and decorations imaginable. I may have to go to Specsavers after Christmas, but what the heck! I’m not used to being trendy but I was going to enjoy it.

Then along came one of my best friends who informed me that Christmas minimalism was “in”. She made this tactless announcement just as I had opened the boxes of bling and was about to climb the branches of a gigantic Christmas tree my son-in-law brought me when he heard that I was going all out this year – “out” being the operative word, apparently. It’s the biggest house tree I ever saw. For all I know it might well be a Red Sequoia all the way from California. It stood there in all its majesty in the hall because we don’t have a sitting room big enough to contain its spreading boughs. I was in the process of climbing it to cut the top off because that particular part was bent downwards and threatening the stability of the ceiling.

Nevertheless, it filled me with Christmas cheer, which is unusual because I’m a great one for keeping the cheer at bay. I was beaming with pride when the friend opened the door and edged warily past the tree as if it might suddenly attack. She couldn’t have come at a better time.

I have to say I was a bit piqued when she told me that minimalism was the fashion this Christmas. The tree was the farthest thing from minimalism that you could imagine. “She’s jealous,” I told myself furiously.

Then she showed me a picture of her tree on her mobile – a sad looking evergreen branch suspended from the ceiling and festooned with just three dark coloured baubles. “You can have half of mine,” I said nastily.

So minimalism is in then, and once more I’m out. I’m not sure though if it applies to the festive fare as well because nearly everyone I know who is indulging in minimalism has brought tankard loads of booze into the home and the Christmas dinner is becoming so exotic now that you’d be hard put to even recognise the turkey.

We knew all about minimalist Christmases when I was young. Sorry if I’m after straying down memory lane again, but they were memorable. The only exotic Christmas lights we knew were the searchlights that flashed in the woods and glens around where I lived. You always knew that Christmas was imminent when the Gardaí were hot in pursuit of illicit distillers who lived close by. There were a few anxious moments when my mother was lacing the Christmas cake with poteen, but we always lived on the edge then. On Christmas night, we put a lighted candle in the window, not for decoration mind you, but to welcome the Holy Family in case they happened to come by again before the Christmas cake was gone.

Christmas Past may have been minimalist by necessity, but Christmas Present is minimalist by choice. No more schmaltzy gaudiness or tasteless showing off! But I’m not even sure if I like Christmas Present. I preferred Christmas Past when nobody was in any doubt about what we were celebrating – a religious, spiritual feast day, approached through the awe and mysticism of midwinter and exited through the hope and certain joy of re-birth. Now, I’m not sure what we’re celebrating, but whatever it is, we’re all expected to put on an extra half a stone in the process and that, to be honest, is not very edifying considering the humble and austere origins of Christmas.

It’s not very edifying either seeing that we’re all supposed to be having a minimalist Christmas. Anyway, I love my tree and I can’t wait to light it up. To hell with the minimalism!