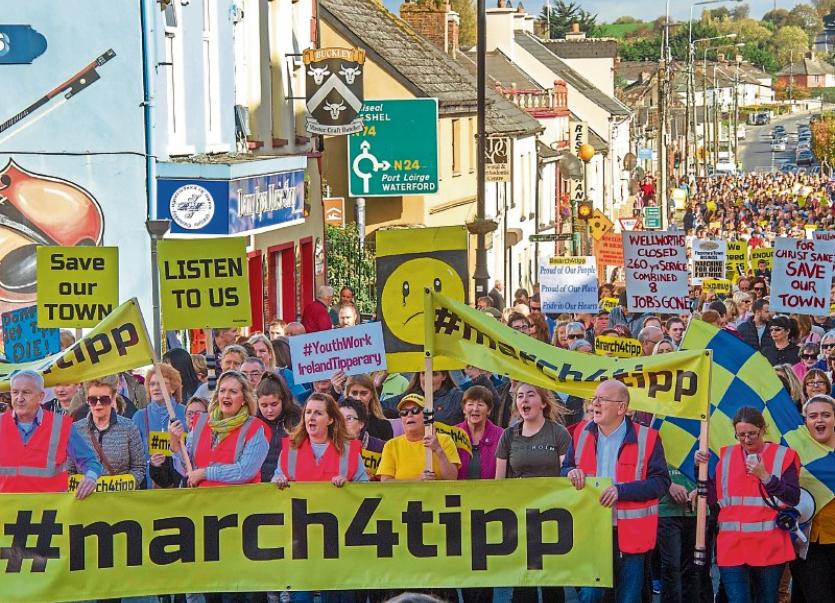 WHAT ever became of the ‘Golden Vale’? The last time I heard of it was in sixth class in primary school when geography class was in full flight and nearly everyone in the class lived on a small farm.

The Golden Vale, which we shared with Limerick, although admittedly most of the bigger farms were in Limerick, was our El Dorado then, and now, if it still exists at all, it’s a disadvantaged area.

The capital of the Golden Vale – as far as I’m concerned anyway, was and is Tipperary town just a couple of miles beyond the Limerick bounds . And Tipperary town is in trouble, feeling abandoned and left behind in the march of the nation.

I’ve always had a soft spot for Tipperary town and it saddens me more than you can imagine to learn of its current straits. It’s not the only small town that feels abandoned these days in the onward march of the nation, but Tipperary always marched to its own tune and revelled in its own essential quaintness and character. All I can say is that the nation’s march must be out of step and things must be really dire when you get an SOS from a town that bears one of the most famous place names in the world.

Now, there were times, back in the glory days of Shannon Development, when I thought it might be a good idea if Limerick – which at the time was trying to push out its own boundaries - would take over Tipperary town, lock, stock and barrel, and make it great again. The annexation would have been mutually satisfactory, I believed, and even I would have benefited. I had been assigned to cover the East Limerick area for the Limerick Leader. News was scarce enough on the ground in what was largely virgin territory and Tipperary was the only town within reach that boasted an Urban District Council offering an endless supply of headlines from doughty town councillors.

Sadly Limerick wasn’t interested in expanding southwards, conscious no doubt that it was here in this border country at Sologhead Beg that Dan Breen sparked off the war of Independence several decades earlier. Anyhow, its acquisitive eye was focused on Clare at the time. Tipperary town, immune to outside influences, was blissfully unaware of being in the wrong place at the wrong time when regional grants were being dished out willy-nilly. Lying in the outer periphery of the South-East region, it missed out on Shannon Development largesse by a few miles of road.

I haven’t been back there since the days when I tried to rescue the Maid of Eireann from being dumped in a corner after she was hit by a passing truck. Unfortunately Limerick people couldn’t care less if they never saw her again as they passed through on the road to Waterford and the statue to the Manchester Martyrs which had stood prominently there for nearly a century was unceremoniously displaced. Things may have changed since then and, for all I know, the admirable John Kiely may well have succeeded where I failed and the Limerickisation of Tipp town may finally be underway, even as I write. But it’s too late. Shannon Development is no more.

Every small rural town is now experiencing something of the trauma that Tipperary has known. Except that Tipperary was different and never lost its soul or its identity to the lure of modernity. It continued to present the quintessential Irish face and character long after other towns had started adorning their streetscapes with multi-national neon signs and generic facades finished off by the token hanging baskets of hybrid petunias.

When the writer Michael Parsons paid a visit to the town ten years ago, at the start of the recent recession, he found a unique town, the commercial life of which was “solidly, unapologetically and proudly provincial”. There were lots of lovely old shop fronts, with glimpses of the Galtee Mountains rearing up dramatically through gaps in the streetscape, and there wasn’t a multinational in sight. One drapery store on the main street had an array of Wellington boots displayed on the pavement outside and another store had a large clock painted on the wall over the door, the hand stuck forever at 3 o’clock, with a sign underneath saying ‘on strike’. You couldn’t buy that kind of urban charm. It’s timeless and it’s ingrained in the soul.

I’m delighted to see that the town is now on the march with the ‘March4Tipp’ campaign. Personally I’d like if they were marching to the tune of ‘It’s a Long Way to Tipperary’, the song that made the place name famous worldwide. But there seems to be some reticence still about Tipperary’s link with the Great War even when it comes to tourism marketing.

Nonetheless, it’s a great tune. It was immortalised in the trenches and even the Germans belted it out on the march. It was used in countless films and recorded by the great John McCormack. I never once heard it played at a hurling match but that doesn’t take from its appeal.

We’ve had our Wild Atlantic Way and our Ancient East, but when is Failte Eireann going to give us “It’s a long way to Tipperary’, via Limerick and the Golden Vale, of course, and give tourists a chance to savour a town of genuine charm - one that the whole world has heard of but which most still regard as a mythical place?