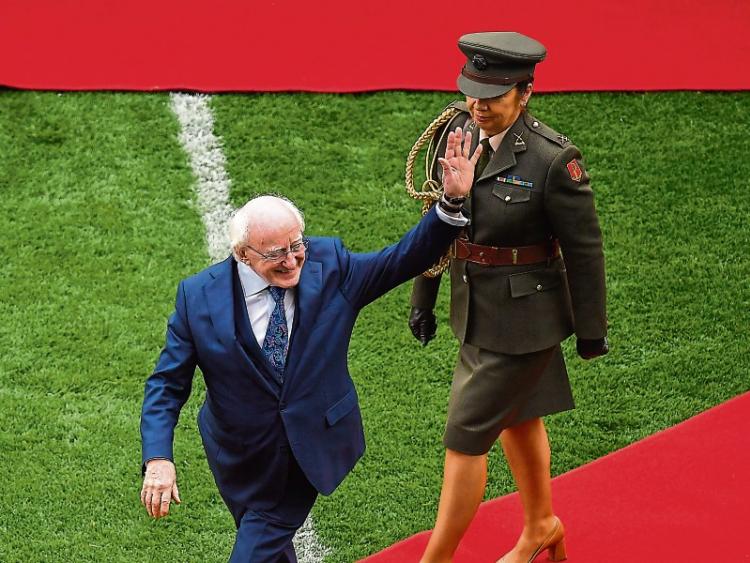 THE Presidential election is revving up now but as far as I’m concerned the whole thing is a bit of a farce. We don’t need an elected Head of State on top of a Taoiseach, a Tánaiste, 158 TDs and 60 Senators, not to talk of the overpaid Judiciary, the Council of State, the Citizens’ Assembly and the half a million top Civil servants, all forcing the few of us that remain to toe the line. We can’t be that hard to govern, can we?

Personally I think the very idea of the Presidency is just pandering to our deep seated sense of self-importance and assuaging our even more deep seated insecurities.

Now, maybe we do need a bit of ceremonial in our drab governance, but can I respectfully suggest that the restoration of the Monarchy would be a far more colourful and much less expensive venture – apart, of course, from the cost of a crown. But we have plenty of jewels. The collar of gold that ‘Malachy won from the proud invader’ according to Tom Moore, but which others say was dug up in Clare, is presumably still in good nick and the Tara brooch is absolutely stunning. We’re not so hedonistic yet that we’d ever dream of using the Ardagh Chalice at a royal banquet, but the Liam MacCarthy Cup could be the jewel in the crown. So bring back the High Kings, I say.

But, you may say, don’t we need someone to guard our republican Constitution and to represent us abroad, and to add a bit of presidential glamour at rugby matches and All-Ireland finals? I don’t think so. The Constitution – or what’s left of it – is in ribbons, and anyway why are we paying all that money to the judiciary? Let them guard the Constitution – and attend the hurling finals too. They’re already attending the rugby, I gather.

Everyone is agreed that Michael D did a great job for the past seven years and represented us very well on the world stage. But I like my Presidents to rock the boat and sock it to us now and then, which is probably why I’d vote for Trump if he managed to get the nod from the four County Councils and promised to drain the swamp, and the Shannon to boot. But he ain’t interested, I’d say.

Michael D fulfilled all our expectations and didn’t put a foot wrong, although I have to say that I cringed a few years ago when I heard him addressing the Queen’s welcoming banquet at Buckingham Palace in an accent so posh and magisterial that it made Her Majesty’s sound earthy and homely. That’s the trouble with the current Presidential incumbent. Not only does he fulfil all our expectations, but he endorses our delusions of grandeur as well, which is alarming, to say the least.

I read a letter to the editor in a National Newspaper this week which warmly extolled the presidency of Michael D and asked if any of the current putative wannabes could even begin where he leaves off. “Witness his superb analysis last week at Dublin Castle of the promulgation of the arms race by the five permanent UN members,” the writer stated. All I can say is that the five permanent members must have been bowled over, but I’d prefer if the President stuck with his domestic socialist principles and told us to our face that we’re a disgrace to our history the way we and our Government continue to promulgate a selfish, divisive, inequitable and materialistic society under the guise of progress, equality and economic advancement.

Personally I don’t care what anyone thinks we’re like on the world stage, because we’re never likely to be in the running for the star role anyway. The world likes us despite or maybe because of our faults. The world harbours some strange romantic notions about us, but what really endears us to everyone is that there is little or no likelihood of us ever upsetting the balance of world power. However, whether the world likes us or not shouldn’t bother us unduly if we can manage to conquer our own self-doubts and insecurities and become plain speakers again.

Finally, let me say that my own preference for Presidency would undoubtedly be good old Shane Ross, who continues to champion the cause of the elderly and their financial plight in the face of widespread mockery and begrudgery. He has made me believe in Santa Claus again after all those years. The trouble is he’s not running and probably wouldn’t even be interested – ever.

The only alternative for me then is a hereditary High King or Queen who would have only the good of his or her subjects at heart, who would renounce forever the war-mongering, cattle raiding propensities of his or her ancestors, and who wouldn’t impose too many levies on our already over-burdened backs. The Monarch doesn’t have to live in a castle, although God knows, unlike ordinary housing stock, we have plenty of those.

He or she would reside outside the Pale, preferably in the ancestral home of our most famous monarch, Brian Boru, in Killaloe, with his own private plane out the back, seeing that we still need to impress the rest of the world. The person chosen – after DNA tests, of course – would come from the hundreds and thousands of us who profess to have the royal blood of Niall of the Nine Hostages running through our veins, although I’m honestly not sure if that kind of discrimination would go down well at all in the New Ireland.