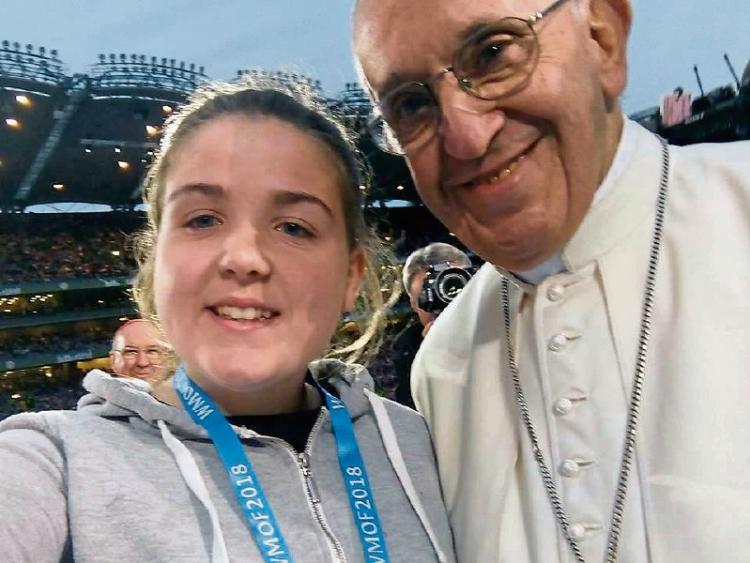 I DIDN’T go to see the Pope and now I’m sorry that I didn’t make the effort. There was a bus from my village but I was afraid it might dump us in Naas and we’d have to walk all the way from there to the Phoenix Park and as sure as God somewhere around the mid-way point I’d fall by the wayside and they’d have to call the emergency services to lift me off the road. I hate being the centre of attention.

Then during the week, when the weather forecast looked ominous, and we were warned to leave our umbrellas at home and not to even think of hauling a kitchen stool along to sit on, my pilgrim soul faltered, I’m sad to say, and stayed put.

Nevertheless, it was for me, glued, as I was, to the TV, an uplifting weekend. I was wishing I was there, but that’s the story of my life. I’m always somewhere else when something momentous is happening, and where I’ll be when the saints go marching in, is anyone’s guess, because I’d never be so presumptuous as to number myself among the saints. All I can say is that I am a practising Roman Catholic and try to keep the rules of membership as best I can. It’s much easier now, because many of the rules have either disappeared or been ridiculously relaxed. Nobody wants to be bound by rules any more, but you know something, I think I was a better Christian when there was personal sacrifice demanded, when we had stricter rules to obey and couldn’t even eat meat on a Friday.

That said, the visit of Pope Francis, was immensely reassuring in the face of the daily spate of Catholic bashing that has been raining on us of late. Don’t get me wrong. I absolutely deplore the vile actions of some Catholic clergy over the years, just as I deplore the pseudo-respectable Ireland we once were and maybe still are. I was cheered by the Pope’s almost tangible humanity. He displayed the common touch without so much as a hint of the patronising clap on the back we received from visiting dignitaries in the past, especially those who claimed kinship with an eye to the voting power of our widespread diaspora.

For me, the most heart-warming moment of the whole weekend was when the young girl, Alison Nevin, from the Travelling Community, asked him if she could have a ‘selfie’ with him – after smuggling in her mobile phone under her jumper. The Pope readily agreed, with a beaming smile and a conspiratorial air that would warm the cockles of your heart. The liberals of the New Ireland were too busy congratulating themselves and wallowing in their own righteousness to make much of it, but a few of them did notice and pronounced it unseemly.

His Holiness reminded me of a parish priest I once knew, named Fr Johnny Minihan – the spittin’ image of him in appearance. Fr Johnny was a man of the people, loved and respected by everyone. He put on a stern face at times, but couldn’t maintain it, almost involuntarily bursting into the most beatific of smiles. He had a glint in his eye that bespoke a certain bemusement at the foibles as well as the heroics of humanity, but which also exuded a rare compassion for the human lot. I thought of Fr Johnny when I watched the Mass in the Phoenix Pak on Sunday and also of all the other good priests I had known who had been there for us in times of sorrow and triumph, including my own uncle.

When I say I was glued to the TV, it wasn’t to the RTE channel, many of whose commentators tried too hard to present the New Ireland and disengage from the old one. The result, for me anyway, was a grudging and ungracious welcome to one of the most famous men in the world, with more than a slight hint of arrogance in the tone. ‘Look at how grown up we’ve become since the last Pope visited us. We’re no longer on our knees’ RTE crowed to the world.

I switched over to Sky News, not because I didn’t want to face uncomfortable truths, but because I wanted to get the real picture of what this particular occasion represented, which I thought was getting lost in RTE’s objectivity anxiety and desire to look sophisticated. I’m glad I did, because in doing so I learned a bit of history about how we came to be colonised in the first place. It wasn’t the Brits who instigated the 1169 invasion which resulted in 800 years of slavery. According to Sky, it was the Pope, who wanted to bring our independent church under the jurisdiction of Rome and who, in cahoots with Henry II, sent Strongbow across to take us over. Now the Vatican has enough on its plate without having to apologise for that as well, but apologies anyway to, Diarmaid MacMurragh! It seems that he too was a victim of fake news.