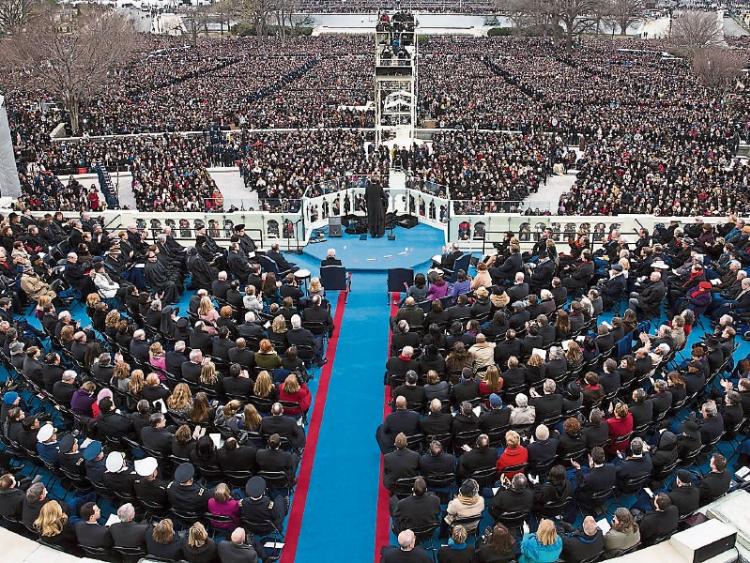 Well it beats Daithi and Maura: Patricia Feehily will be watching the Donald Trump's inauguration this Friday afternoon

I’M afraid I’ve succumbed to the January ‘blues’ this week after just discovering that we’re still only halfway through the longest month of the year.

Christmas seems so long ago now that I feel I should be getting ready for the next one, lest it creep up on me again and catch me unawares, as it does every year. But don’t mind me, for God’s sake: my concept of time is getting warped with age. I keep thinking it was only yesterday I left school.

Nevertheless, I’ve also learned that I’m not alone and that January is a depressing month for a lot of people. On-line sun holidays are selling like hot buns at the moment, if you’ll pardon the pun. The New Year’s resolutions have already gone down the drain; everything is grey and bleak and even the Recovery is clouded over. Now we have both a hard frost and a hard Brexit looming in the spring and to be honest, I don’t know which is worse.

As if all that weren’t bad enough, I learn, as I write, that today, the third Monday of January is the most depressing day of the year for everyone – a fact only recently discovered by a Travel company trying to sell even more exotic holidays. This patronising disclosure is even more depressing. And the mood apparently is not helped this year by the imminence of the Trump Presidential inauguration, which is making some people want to crawl back under the covers and wait for Groundhog day.

Not me though! I’m looking forward to seeing the solemn event unfold on TV. I don’t, for one minute, expect that it will cure the blues, but it is a welcome diversion in the winter gloom.

I’ll be glued to the telly all day and himself may have to get his own dinner, which won’t do anything to endear him to Trump, who, apparently, is going to bring down the price of cattle by flooding the world with buffalo. That’s if he hasn’t, in the meantime, pressed the red button at his elbow in a tantrum and obliterated the lot of us - buffalo and all.

By the way, this constant reference to the red button by anti-Trump intellectuals has become a source of intense irritation – to me anyway. It’s only a figure of speech, I presume, but I find the very idea that the US or any other nation should be allowed to have a red button to hand in the first place extremely offensive to the rest of humanity. The galling thing is that we’re expected to believe that the US president is fitted with the equivalent of a global suicide belt to keep the rest of the world in check, and that at the first sign of real trouble he - whoever he may be - won’t forget about the rest of us and take to the skies in Air Force One to rise above it all.

It’s the stuff of nightmares and the notion shouldn’t even be entertained by the free world.

Now, before I say anything further about the inauguration, I have to tread carefully here in deference to my American cousins who are sick to the gills and full of despair at the prospect of being ruled by Donald J for the next four years – a whole lifetime of grey Januaries, seeing that the majority of his appointees are even greyer than I am.

They’re richer too, but that’s neither here nor there. But I wouldn’t want to offend the cousins because they are good people and can’t understand my penchant for irreverence. I can’t even understand it myself, because I was reared to believe that respectability was everything, even when, for one reason or another, ‘respectability’ in 1950’s rural Ireland was sadly beyond the reach of the ‘respectful’ who were expected to know their place.

The outrageous were outcasts, although some of them were happier that way. Looking back, as Geronimo did, from the high hill of his advancing years, I sometimes regret that I wasn’t a bit less respectful myself back then and I mightn’t be such a pain in the neck now.

Mr Trump, thankfully, is not one of the respectful and according to some people, he doesn’t even know his place, which is a blessing.

But for all his boorish ways he was elected democratically, even if he didn’t get as many votes as Hilary - which shows that the American Constitution is not perfect either and can’t really be trusted with custodianship of the red button. He may yet confound his critics and make America great again, which could be another appalling vista, depending on how you view it. We’d be happier if he just continued to make the conventional feel deeply uncomfortable and discomfited.

But the main reason why I’m looking forward to Friday is that I love a spectacle and a bit of ceremonial, especially in the middle of a dull January. I won’t be the only one and I suspect that daytime TV ratings will soar at least for an hour. If nothing else it will be a welcome break from Daithi and Maura.

But I will be very disappointed if the Trump inauguration doesn’t provide a memorable spectacle – even if it’s only the sight of the urbane and sophisticated visibly cringing under the star spangled banner.

From what I’ve heard of Trump’s agenda, I’m not a bit impressed. My US cousins tell me that the coronation of Trump is no joke for any of us. But neither is a gloomy January and I’m depending on Trump to get me through it.