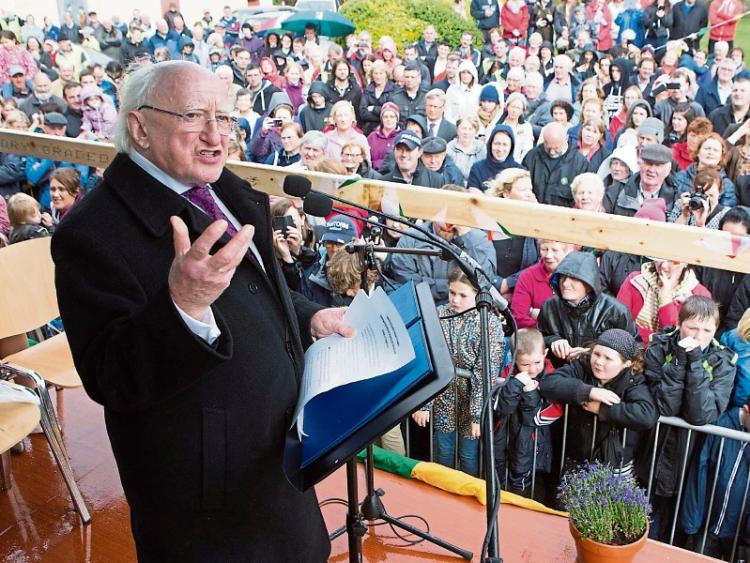 A BIT of populist patriotism never goes astray, especially in times of unease. Now if that sounds a bit cynical on my part, well just don’t mind me.

I’m in a bad mood this week, what with Halloween looming and the evenings drawing in and industrial unrest threatening on all sides.

The thing is, I feel as if I have just been outmanoeuvred by President Michael D Higgins, of all people. I was going to forego the extra fiver in the pension next March in the interests of industrial peace, even though, as I’ve said before, martyrdom of any kind is alien to my nature.

Anyway, I’ve already spent the fiver so I suppose I was on a hiding to nowhere from the outset.

Nevertheless, I thought that if the guards and the teachers and all the other public servants, waiting in the wings, saw an old-aged pensioner sacrificing her miserable mite they might be inspired to abandon their daft pursuit of equality and fairness, and concentrate instead on liberty, fraternity and Brendan Howlin’s sacrosanct Lansdowne Road.

But as the fellow said, the way to hell is paved with good intentions. I now find that another grey voter has stolen a march on me and pre-empted my proposed patriotic gesture. President Higgins has announced to all and sundry that he will not be taking his due pay restoration or any pay increase whatsoever, making him look like a hero - and making my sacrificial fiver look like a bloody joke.

It’s not the first time that President Higgins has foregone a pay rise, so why they keep offering him one in the first place is a mystery to me. Wouldn’t it be much better for the economy and everyone concerned if the Government paymaster stopped offering pay increases to those they suspect won’t take them?

President Higgins’ magnanimity is impressive, and, to be honest, I feel a right heel to be even mentioning it. If I hadn’t thought of it first myself, I’d probably have said nothing.

He waived over €76,000 of his own salary when he first took office and he hasn’t had a pay rise since. He has also gifted his Ministerial, Dail and Senate pensions to the State, which must be putting a lot of pressure on anyone who entered either politics, the garda force or the teaching profession just for the pay and the pension. Not saying that anyone did now, mind you!

And what kind of pressure will it put on his successors in the years ahead?

But, at the end of the day, everything is relative, and there’s many a teacher and guard on the streets this week who would think they were in Paradise if they had the €76,000 surfeit alone in their pay packets every year, or even half of it as far as some of them are concerned.

The President still has just short of €250,000 a year to live on, as well as numerous perks, a free house and more status than Brian Boru. Unlike the unfortunate DalCassian, there is no-one, as far as I can see, trying to dethrone Mr Higgins.

I’m not saying that the President is not doing a good job, although I am in two minds as to whether we really do need a President in the first place.

But Mr Higgins does not have to put his life on the line to protect his people as the guards have to do, or even as Brian Boru seems have done – if we are to believe the propagandists of the day.

Neither does he have to deal with an education system that’s bursting at the seams with anomalies and inequalities, or a new Junior Cert English programme, riddled with poetic fallacies and looking as if it was devised by a particularly antagonistic Klingon.

As well as that he doesn’t have half the responsibilities of the Taoiseach, who is expected to indulge all our whims and keep us on the straight and narrow at the same time, for a miserable €185,000 a year, without even a word of gratitude and with brickbats flying all around him every time he opens his mouth.

Having said all that, I do think that President Higgins is to be commended for trying to do the right thing, seeing that we’re not out of the woods yet as far as the economy is concerned. But to my great irritation, I see that I’m not the only one feeling upstaged by the Presidential gesture. Sinn Fein doesn’t think it right for TDs to take their proposed €2,700 pay restoration offer either, especially when some of us are only getting a fiver, and the teachers are getting nothing at all for being naughty.

Thanks for thinking of us, guys. However, I would much prefer to see my tax money going towards the restoration of a TD’s cut back salary than to see a large chunk of that salary being donated by any TD to any political party – least of all to Sinn Fein – without even consulting me who contributed to it in the first place.

Finally, if the President is intent on setting an example to anyone, I hope it isn’t to the poorly paid ranks of the currently beleaguered public sector, who, like me with my fiver, couldn’t ever possibly hope to reach such exalted standards of moral behaviour that would see us voluntarily tossing €76,000 of our earnings back into the State’s coffers in a gesture of goodwill.