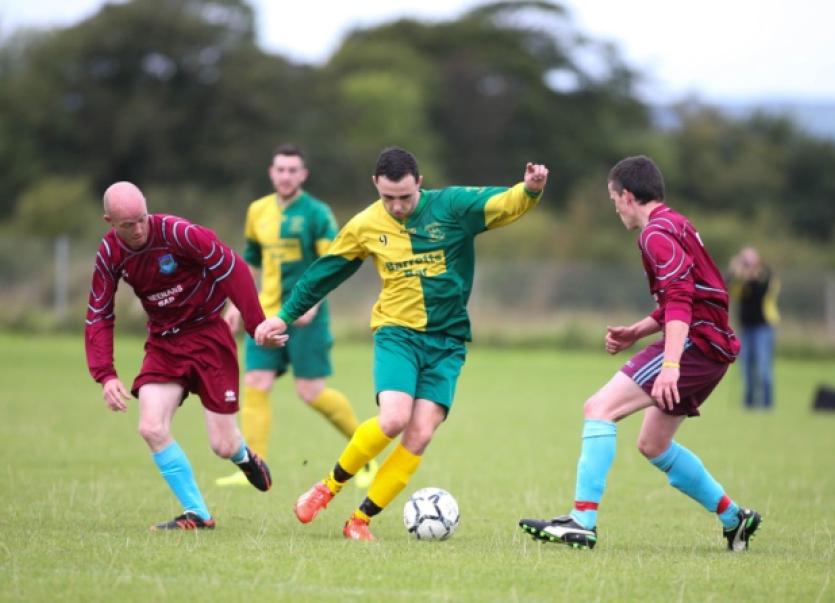 Twelve Limerick Desmond League teams were in the hat for the FAI Junior Cup first round draw last week. Seven of them will open their campaign this Sunday, with another, Newcastle West, in action next Tuesday.

This is without doubt the tie of the round as far as Limerick Desmond sides are concerned, matching up the top two in the Premier Division. Broadford were very impressive in overcoming a resilient Ballingarry side last Sunday to maintain their 100 percent record. The clean sheet will be welcome to player-manager Ray Lynch as his side had conceded a total of seven goals in their previous three games. Lynch will also be pleased that striker Liam O’Shaughnessy has continued his rate of two goals in each of the four games since the season started.

Like Broadford, Rathkeale have scored an average of over three goals per game so far. However, none of the four games were against the top teams and so Broadford will represent a huge challenge for Seamus Giltenane’s men. It is a challenge that they will relish and they are sure to give a good account of themselves but I find it difficult to go against a Broadford side who seem to be getting better with every match.

Having lost their opening two games of the season, Glin Rovers have bounced back to take four points from their last two games. They are always a difficult proposition at home but the spirit and teamwork shown by Ballingarry in their defeat to Broadford last Sunday leads me to believe that the visitors will prevail.

When these two sides met in Carrickerry last Sunday, the result was a 4-0 win to Carrig Celtic, who have enjoyed a decent start to the season. The heavy defeat for Shannnonside can be partly explained by the fact that they were understrength but even if they have a few players back for next Sunday it might only be enough to narrow the gap and not reverse the outcome.

Rockhill Rovers have had a horrendous start to life in the Premier Division, conceding a total of 24 goals in their four defeats. Playing away to Fenit Samphires, a Premier B side in Kerry, might not be a case of going from the frying-pan into the fire but they are unlikely to get any respite from their visit, either, as Fenit, based five miles from Tralee, are a side that have been pushing for promotion to Premier A in recent seasons.

This game takes place next Tuesday in Mounthawk Park, Tralee. The two sides had contrasting fortunes in the league last season, with Newcastle West winning the Premier title and Classic being relegated from Premier A in Kerry. Newcastle West aren’t the side they were last season but, freed from the distractions of Gaelic football commitments, they should be good enough to register a victory here.