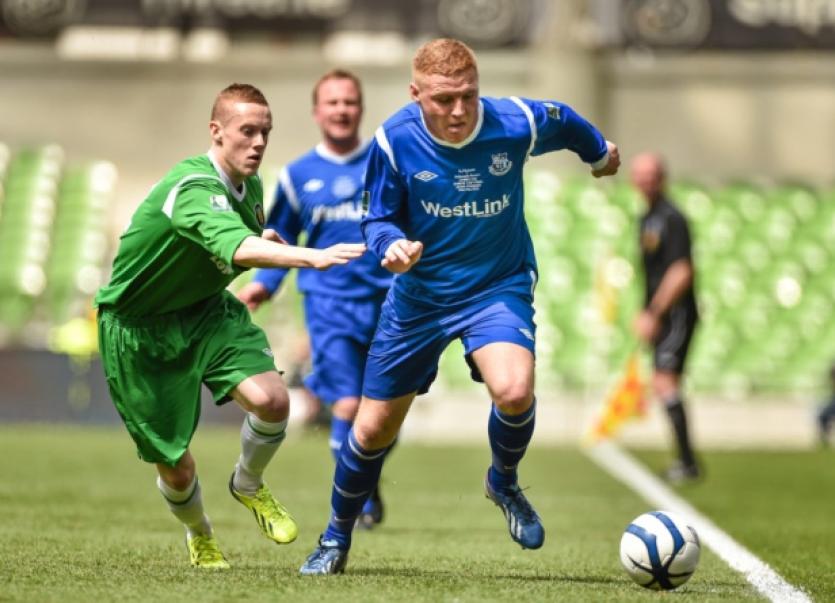 LIMERICK’S Ballynanty Rovers brave bid for the FAI Junior Cup ended at the final hurdle on Sunday when they were defeated 4-0 by St Michaels in the Aviva Stadium in Dublin.

LIMERICK’S Ballynanty Rovers brave bid for the FAI Junior Cup ended at the final hurdle on Sunday when they were defeated 4-0 by St Michaels in the Aviva Stadium in Dublin.

The huge travelling band of Balla supporters made the long journey home after being well beaten by a vastly experienced St Michaels XI.

The Tipperary side took home the Cup for the first time since 1974 having been defeated in four finals in the interim.

For Ballynanty Rvs it was their third time going down in the final and while there are few words to ease their pain, they can hold their head high with the achievement of reaching decider.

The final scoreline is harsh as the winners tacked on two goals late on with Balla chasing the game.

What will kill the Blues is that they never rose to the levels they are capable of reaching but in the end they have to accept that the better team on the day won out.

The winners were stuffed with International players but Balla matched them for much of the game.

The Limerick side were guilty of overplaying the ball at the back on occasions and with strikers as lively as Jimmy Carr around it proved a recipe for disaster.

That said, Balla were not found wanting when it came to heart and spirit with the likes of Alex Purcell, Dave Dunphy and Ronan Ryan to the fore.

The loss of Dermot Fitzgerald through injury early in the second half was another unsettling factor for this young side.

Saints proved more clinical in the final third, scoring from nearly every opportunity that presented itself.

In the opening minute a poor pass out of the Balla defence allowed Pat Quinn race clear on goal but a posse of Balla defenders raced back to close down the chance.

A minute later Jimmy Carr let fly with a snap shot from the edge of the area forcing Stephen McNamara low to save and a foul on David Slattery presented Saints with a free kick on the edge of the Balla goal but his well struck effort was turned around the post by McNamara.

Balla began to finds their feet and on 12 minutes a free kick from David Dunphy into the Saints area was only half cleared and Tom Daly returned the ball goalward but it was scrambled off the line.

Dara Hughes put Purcell away on the right and his cross/shot forced a worried Aaron Wall to turn the ball out for a corner from which Dunphy’s inswinging delivery forced Saints keeper Aaron Wall full length to turn away.

A superb ball from Dermot Fitzgerald put Alex Purcell away on the right and he showed a clean pair of heels to his marker to put a ball low across goal where David Dunphy racing in got a touch but not enough to find the target.

The deadlock was broken on 20 minutes.

Balla had a number of chances to clear their lines and paid the price when Jimmy Carr took passion and delivered to the back post where Dave Slattery rose to head in.

Balla’s response was a corner from Dunphy that was headed just over the top by Fitzgerald.

Brian Doran cleared off the line from a Paul Breen header and before the break his brother Shane repeated the feat when he was in the right place to deny Slattery a second goal.

Fitzgerald was stretchered off on 55 minutes and within ten minutes Saints doubled their lead when Pat Quinn made his way to the end line and somehow squeezed his shot in off the upright.

With Balla on the search for a way back a quick breakaway by Richard Ryan saw him race clear and pull the ball back across goal for the unmarked Jimmy Carr to fire home.

With time running out a loose ball in midfield was picked up by Carr and typical of their day, the last defender slipped allowing Carr to put the final nail in the coffin.