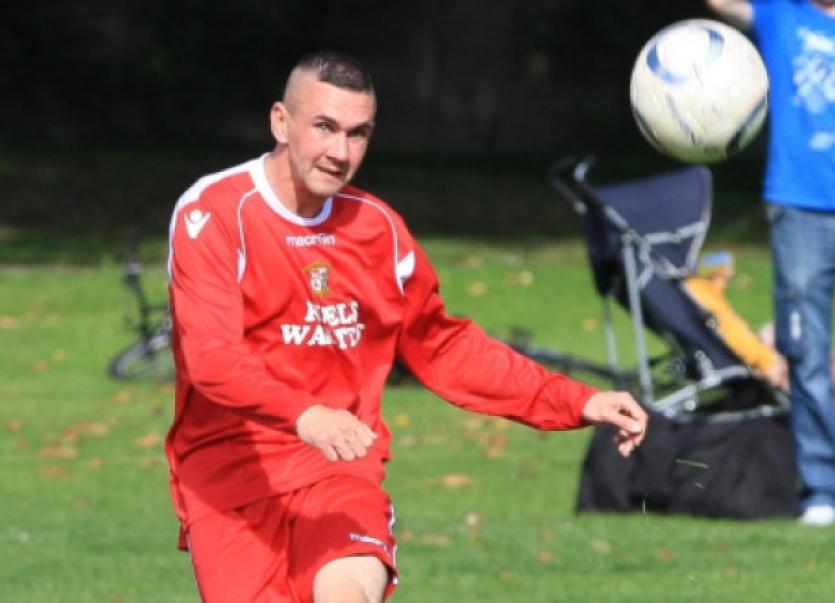 MOYROSS United have advanced to the quarter-finals of the FAI Junior Cup for the first time in their history.

MOYROSS United have advanced to the quarter-finals of the FAI Junior Cup for the first time in their history.

Their 2-1 win over fancied Carrick Utd ensures Limerick interest in the last eight of the national competition.

Moyross Utd pulled out one of the best results in the Clubs history when they beat a high flying Carrick Utd side in Moyross in the FAI Junior Cup on Sunday afternoon to maintain Limerick interest in the famous competition.

The home side did it the hard way as they were reduced to ten men midway through the second half and had to withstand a Carrick onslaught before snatching victory in the dying minutes.

A massive crowd turned out to lend their support to the locals and the team responded in kind.

They rattled the visitors from the start and deservedly took the lead through Keith Colbert on 15 minutes.

Carrick, who came to town with a star studded squad, eventually played their way back into contention and a second half equaliser followed by a second yellow card that saw Anthony Lee leave the field suggested it was not to be Moyross’ day.

However Carrick had not counted on the fighting qualities of their hosts and while they did create more chances they could not break down a team of players giving it their all.

That never say die attitude stood the homesters well in the end when they hosts won through with a last minute winner.

Moyross had heroes all over the park. Goalkeeper Paudie Hickey pulled off two world class saves to deny Daryl Kavanagh at crucial stages in the game.

The back four was rock solid with Pat McCallig leading by example. In the middle of the park Keith Colbert marked his return from injury with a wonder goal.

Shane Guerin had his best outing of the season for the winners. First breaking up play in the middle of the park and then when called into defensive duties following Lee’s dismissal. To chip in with the winning goal (claiming he got the final touch to Keith Colbert’s free kick!) was the icing on the cake.

The Moyross frontrunners did not get much change from a good defence but their work rate made life easier for their team mates further back the field.

Moyross nearly had the perfect start to proceedings when Adrian Power delivered from a corner and Anthony Lee’s header smacked off the woodwork.

With Moyross applying severe pressure on the visitors the opening goal came on fifteen minutes. Anthony Lee picked up a Carrick clearance and instead of hoofing the ball back into the danger zone picked out Keith Colbert in the middle of the park.

The Moyross midfielder showed superb skill in turning two opponents, creating space for him to look up and let fly from thirty yards catching Irish goalkeeper Adrian Walsh off his line as the ball struck off the roof of the net.

The goal lifted the home side and minutes later Barry Quinn let fly with another long range shot that had Walsh scurrying across his line as the ball flew over the top.

On the half hour mark Colbert played a clever ball over the top and Quinn was in like a flash, beating his man to the ball but hit his first time effort over the bar.

At the other end, the visitors went close to an equaliser ten minutes from the break when the ball deflected off Pat McCallig but a superb save by the alert Paudie Hickey turned the ball to safety.

The last action of the half came from a Carrick corner and defender Anthony O’Donnell lost his marker at the back post but his goal bound header was cleared of the line by Shane Guerin.

An inch perfect cross by Dale O’Mahoney was headed across the face of goal by John Walsh and Kavanagh arrived on cue to flash the ball to the net.

The goal sparked Carrick and a good run by Kavanagh set up Ian Cleary with a great chance but Guerin was again in the right spot to clear off the line.

At the other end a good cross by Mike Guerin forced Adrian Walsh to save bravely at the feet of the in running Barry Quinn.

Disaster stuck for the home side with the sending off and from the resulting free kick Kavanagh forced another good save by Hickey.

A good run by Timmy Ryan saw him race down the left and he pulled the ball across goal but Kavanagh uncharacteristically lifted the ball over the top.

With time running out Carrick were awarded a free kick midway inside the Moyross half and with the home side continuing to argue the decision a quick ball put Jack O’Doherty free on the left.

He pulled the ball back for Kavanagh who looked like he must score but a brilliant save by Hickey ensured extra time.

The keeper was to the fore again at the start of extra time when he made another top class save to deny Kavanagh and the miss seemed to take the fizz out of the visitors.

With penalties looming Moyross were awarded a free kick on the left. Keith Colbert send in an in swinger.

Shane Guerin rose above his marker and got the slightest touch to leave Walsh stranded as the ball flew to the net.

The celebrations sparked by the goal continued well into the night and they now await the quarter final draw with fingers crossed for another home tie in the prestigious Cup competition.