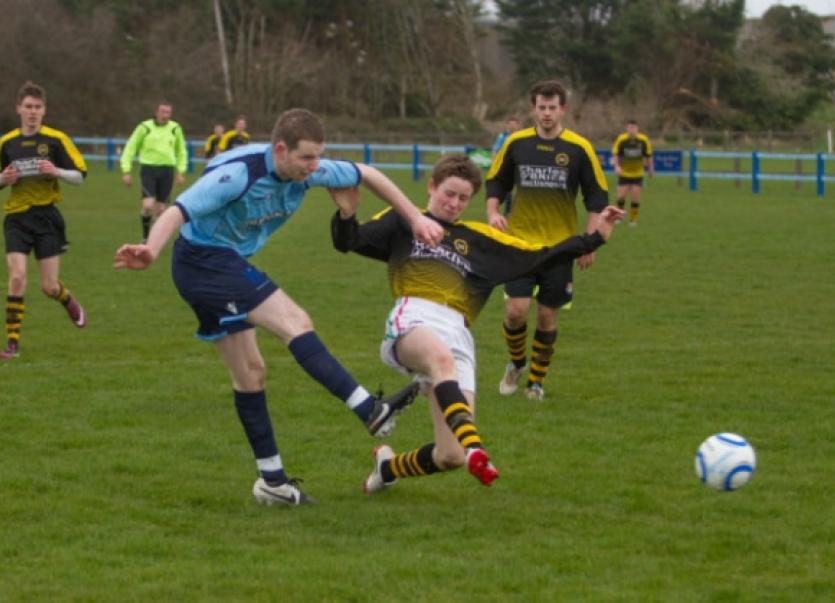 An 86th minute goal by Cillian O’Connor secured a 3-2 victory for Athea United away to local rivals, Glin Rovers, in the first round of the Desmond Cup. Athea had led 2-0 with a first-half penalty from Maurice Hayes and a 55th goal from O’Connor but had to rely on O’Connor’s winner after Glin had fought back with two goals in the space of five minutes from Padraig Costello and Ed Horan.

Rathkeale, one of the favourites to win the competition, advanced with a 5-3 victory at home to Newcastle West Rovers B. Mikey Lyons bagged a brace and the other scorers were Timmy Hogan, Barry Riordan and Sean O’Shea.

Kilcornan led 1-0 at half-time at home to Division 3 strugglers, Shannonside FC B, with a goal from Mark Murphy but they had to wait until Rob Carrig’s goal with the last kick of the game before they put the result beyond doubt. Knockaderry won 4-1 away to Feenagh B. St. Ita’s B are playing their home games in Broadford’s old pitch at the moment and so Broadford United B didn’t really feel like the away team when they won 2-1 with goals from Gerry O’Shea and Kevin Quaid.

Abbeyfeale United received a walkover from Ballingarry B. There was one second round game in the Desmond Cup and it resulted in a 3-0 victory for newly-crowned Division 3 Champions, Shountrade, away to Carrig Celtic B. Their scorers were Richard Shorten, Denis Hayes and Philip Condon.

Abbeyfeale United B became the last team to lose their unbeaten record in league and cup when they conceded three goals without reply in the semi-final of the Reidy Cup against Feenagh in Clounreask on Friday night. Feenagh led 1-0 at half-time with a goal from John O’Gorman and their second-half scorers were Timmy Lynch and O’Gorman again.

Broadford United regained top spot in the Premier Division in emphatic fashion when they won 7-1 at home to relegation-threatened Rockhill Rovers. Paul Madigan, Ray Lynch and John Kelly all scored twice, while Alan Fitzpatrick had to settle for one.

Kildimo United and Killeaney both kept up their quest for promotion with victories. Kildimo won 2-0 away to Old Mill, while Killeaney came from behind at half-time to win 5-1 at home to Askeaton thanks to a Paul Brouder hat-trick and goals from Darragh Woods (penalty) and Sean O’Connor.

A Cathal Battles brace put Pallaskenry 2-0 up away to Breska Rovers but the visitors had to rely on a late headed goal from Cian McKee after Breska had fought back to 2-2.

After losing their unbeaten record in dismal fashion on Friday night, Abbeyfeale United B got back to winning ways on Sunday with a 5-1 victory at home to Ferry Rangers that moves them into a mid-table spot in Division 2, with from three to five games in hand on the teams above them. Kieran Wynn and Nathan Murphy both contributed a brace and the other scorer was Cathal Broderick.

Stephen Hickey scored the Granagh United goal in their 1-1draw at home to Ballysteen.

Abbeyfeale United reached the semi-finals of the Desmond Youths Cup by winning 5-1 away to Youths Division 3 Champions, Ferry Rangers. The goals were scored by Cormac Roche (2), Thomas Sexton (2) and Pa O’Connor.

Killeaney moved three points clear at the top of Youths Division 2 with a 7-0 victory at home to Askeaton. Dara Noonan netted a hat-trick and the other scorers were John Wallace, Jer Stack, James Wallace and Colin Enright.

Rathkeale will meet Creeves Celtic in the Youths Division 2 League Cup Final after winning 3-1 away to Granagh United.

Two months after Ferry Rangers reached the Youths Division 3 League Cup Final, Pallaskenry did likewise with a 5-3 victory away to Carrig Celtic, whose scorers were Dan Barrett, Steven Cox and Cillian Enright.

Shannonside FC are relying on the Desmond Cup for victories at the moment as they have only collected one point from their last six league matches. In light of that poor record, it’s no surprise that they are in serious relegation trouble, in what looks like a three-way battle to avoid the drop with the Rovers from Glin and Rockhill.

They won 3-0 at home to Newcastle West B in the first round but will find it more difficult to cope with the visit of Killeaney, who remain in promotion contention in Division 1 after winning 5-1 at home to Askeaton last Sunday.

With a successful defence of their league title now realistically beyond them, retaining the Desmond Cup is the primary target for Newcastle West and, with nine victories in their last eleven matches in all competitions, they must have a great chance of doing so.

Seoirse Joyce may well be the best striker in the league right now, a statement that is lent weight by the fact that he has scored three and set up the other four of the seven goals that Newcastle West have scored in their last two matches, which were victories against Broadford United and Abbeyfeale United.

Newcastle West showed that they were able to dig deep when they were under pressure and so it’s hard to envisage that they won’t outscore Kilcornan.

Winning 2-1 against fellow Division 3 side, St. Ita’s B, may well be the extent of Broadford United B’s success in the Desmond Cup this season, as Rathkeale B’s three-month grip of second spot in Division 1 suggests that they are a calibre above their hosts.