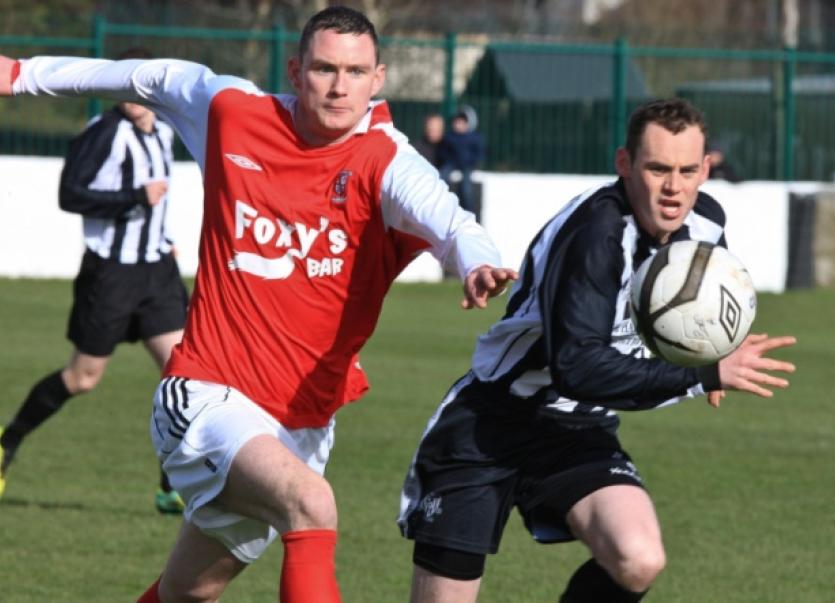 Pat Sheehan looks ahead to this weekend’s soccer action in the Munster Junior Cup.

Pat Sheehan looks ahead to this weekend’s soccer action in the Munster Junior Cup.

This weekend sees two all-Limerick MFA Quarter-Finals that are sure to bring out the crowds.

With most of the teams in town starved of action since Christmas hopes everyone is hopeful that we may keep the full fixture list intact until kick off time at least.

Janesboro host Ballynanty while Regional are at home to Carew Park in two games that ensure Limerick will have two teams in the last four of the provincial tournament.

‘Boro had the perfect preparation for next weekend following Sunday’s 5-0 win over Waterford’s St Saviours.

Shane Clarke brought his tally for the season to 39 goals and along with Brendan Hourigan will provide the main goal threat to Ballynanty Rvs.

Ballynanty Rvs are unbeaten in 19 games. Ironically their last defeat back in October was against none other than Janesboro. With little to choose between the sides this could well prove a nail biter.

No reflection on either defence but it is fair to say both sides main strength lies in it’s attacking abilities which should please the watching fans.

The second quarter final is another hard one to call. Geraldines have been a breath of fresh air this season and seem to be carried along on a winning wave.

A young side in the habit of winning is hard to stop.

They meet a Regional Utd side still smarting from an FAI defeat to Carew Park in their last outing and eager to get back to winning ways.

There are some intriguing battles on offer with Colm Scanlon and Pat Moloney’s clash with Brian O’Callaghan and David Cowpar having a huge bearing on the outcome.

At the other end of the field Paul Danagher and Co will have to keep tabs on Ken Nealon and Mike Behan.

I think the middle of the park is where this game will be decided. Christy O’Neill and Bobby Tier up against Kieran O’Connell and Shane O’Doherty is a mouth watering prospect and who holds their nerve should win through.

St Michael’s or Park Utd await the winners of Janesboro and Ballynanty Rvs in the semi final while the other fixture Killarney Celtic or Newmarket Celtic will host the winners of Regional Utd or Geraldines.

In the Lawson Cup Croom Utd and Newport try again to get their game played while the all –premier game involving Granville Rgs and Corbally Utd is also scheduled.

The Premier League has a couple of games scheduled with leaders Pike Rvs having the chance to open a 13 point gap on second placed Janesboro when they visit Summerville Rvs.

Summerville went down in the semi final of the Tuohy Cup to Ballynanty Rvs and by their own admission did not play to their potential.

Pat Koyce will be demanding a better showing from his players and what better than to lower the Pike colours for the first time this season.

The Hoops 100% record is mighty impressive with only five goals conceded in 12 matches.

Newcomers Cian Collins and Reece Healy have found their feet and are playing superb football. John Okoro notched his third hat trick of the season last weekend and will be hoping for a prolonged run in the side. With the League as their main focus it’s hard to see Pike slipping up.

The other Premier League game is new look Fairview Rgs v Wembley Rvs. Derek Whyte has attracted a number of impressive signings including the return to the club of Jeffery Judge, Colm Heffernan and Trevor Cosgrove.

Wembley, without a point continue to bravely plough through a season to forget.

Tomorrow evening’s game is in the Div 1A O’Halloran Cup when Pike Rvs B host Moyross at 7.30 in Jackman Park.