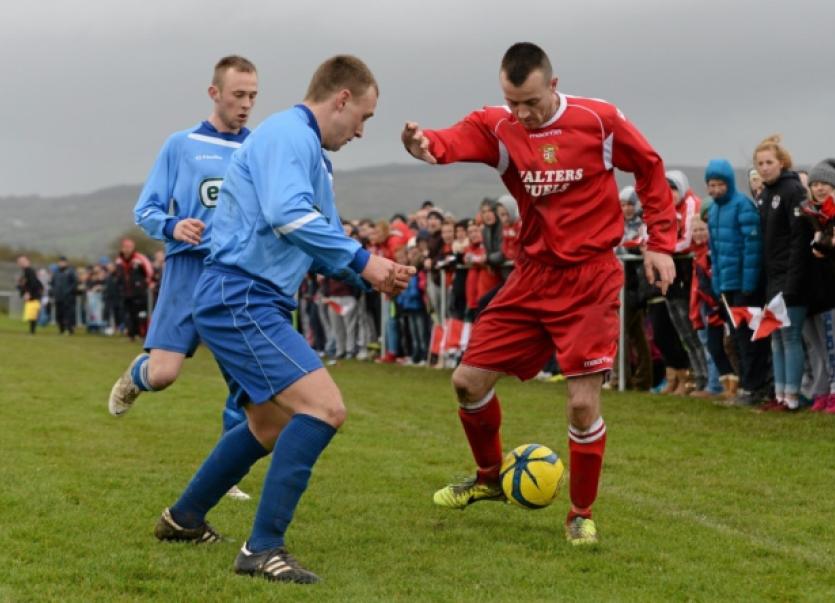 MOYROSS’ memorable FAI Junior Cup journey came to a cruel halt on Sunday afternoon when they came up short, 5-4, in the dreaded penalty shoot out against Wexford outfit North End United.

MOYROSS’ memorable FAI Junior Cup journey came to a cruel halt on Sunday afternoon when they came up short, 5-4, in the dreaded penalty shoot out against Wexford outfit North End United.

While never easy to go out in such circumstances, what makes it even worse for the home side was the face they lost a two goal lead with the equaliser coming seconds from the end of injury time. The sides finished level 3-3 at the end of extra time.

The visitors broke the deadlock midway through the opening half. Keith Kearney evaded Moyross’ offside line to gather and when he tempted Hickey from his goal he centred for Murphy to tap in.

Moyross equalised when a hopeful Keith Colbert ball was flicked on by Ger Cronin and Adrian Power got in front of his marker before firing across keeper Lee Walker into the far corner.

Moyross began the second half on the front foot and after a bout of sustained pressure, Power sent Quinn away on the left and the striker cut in along the end line before being tripped in the area.

Quinn dusted himself down and slotted in the spot kick to give Moyross the lead.

After 70 minutes a hopeful free-kick from Shane Guerin from deep inside the Moyross half was allowed run to keeper Lee Walker near the edge of the area but when the keeper fumbled Ger Cronin was in like a flash and in his attempt to recover Walker fouled the Moyross man. Another penalty and another successful kick from Quinn to make it 3-1.

North End threw caution to the wind chasing a goal back. The visitors got their reward 15 minutes from time when Guerin was adjudged to have fouled Beary and from the resultant spot kick Paul Murphy slotted his second of the day. With seconds remaining a goalmouth melee ended with John Fenlon heading home from close range to break the hearts of the huge Moyross support.

Extra-time saw two tired sides battle it out but chances were few and far between so penalties were called for.

The Wexford men held their nerve to go into the hat for the semi final draw while Moyross must live with what might have been.

Janesboro moved in menacingly in behind leaders Pike Rovers in the Premier League with a comfortable win over Fairview Rangers at Pearse Stadium on Sunday.

A Mike Hogan goal was the only score in the first half but after the break ‘Boro upped the tempo significantly and a Shane Clarke hat trick along with scores from Aled Harkin and Mike O’Gorman completed the rout.

Last weekend’s results saw Corbally drop into the bottom two but they picked up three vital points with a win over Geraldines.

An early goal from Ken Nealon put them on their way and Mark Hannon tacked on a second before the break.

Dylan Blackhall pulled one back for the Dines but Cian Collins converted a spot kick to ensure victory for Sean Cronin’s men.

In another of the so called relegation six pointers, Summerville came out tops with a one goal win over Aisling.

James Cleary scored the only goal of a game in which John Corbett excelled in defence for the winners.