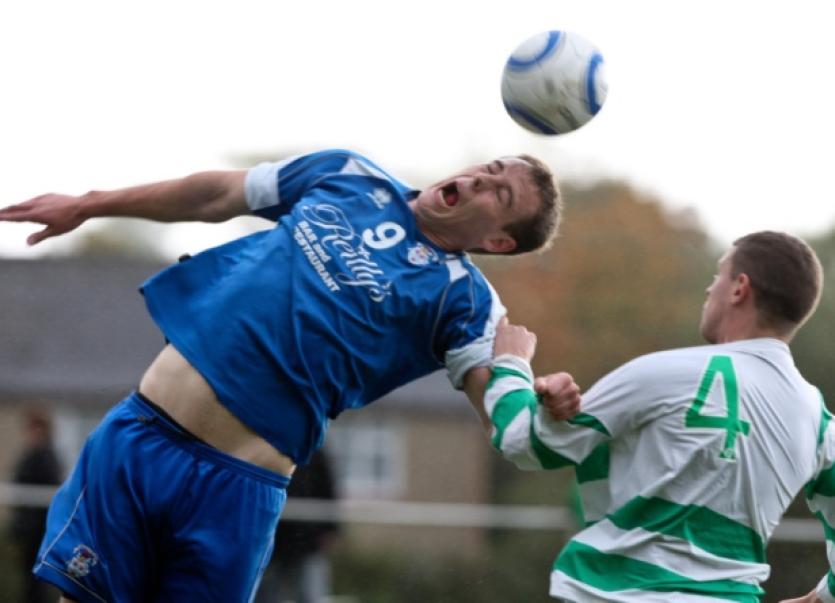 LIMERICK’S top sides have advanced in the FAI Junior Cup.

LIMERICK’S top sides have advanced in the FAI Junior Cup.

Pike Rovers sealed their place in the next round of the FAI Junior Cup but were made to work in a 2-0 win over Corbally in round three.

Kieran O’Hanlon converted a 55th minute penalty to give Pike the lead. Ten minutes from time, Pat Mullins sealed the win and Rovers’ passage to the next round.

Fairview secured a clash with Janesboro and a facile 5-0 win in Holycross.

Nathan O’Callaghan and Christy Doyle netted two each and Nathan Clancy rounded off the scoring.

A Pat Whelan was the hat trick hero as Athlunkard progress to the next round.

Liam Kerwin responded for the division 4 side who had an impressive display from ‘keeper Tom Mescall.

Hill Celtic set up a fourth round tie with Moyross after a 1-0 win. Adrian Mitchell scored the winner.

Premier division Regional made it to round three with this victory. Ollie O’Driscoll gave them the lead before Kieran Long equalised.

Newport will play Summerville’s second XI in the next round after a penalty shoot out win.

Keeper Mark Barry was the hero saving twice in the shoot out.

Barry Danagher, Eugene McNamara and Keith McNicholas all scored as Mungret progressed to the next round.

The county Cork side progressed thanks to goals from Martin Strahr, Martin O’Brien and Shane Dillon.

Herbertstown needed goals from Conor Burke and Keith Mawdsely in extra time to reach the next stage of the competition.

A Darren O’Sullivan hat trick was the difference between the sides as Carew secured all three points.

A big away win for Janesboro as Tom Clarke, Lee O’Mara, Shane Clarke and Shane Waters all got on the scoresheet.

A James Clancy hat trick gave Summerville the spoils to get out of the drop zone in the Premier League.

Caherdavin and Granville Rgs shared the spoils as did Caherconlish and Hospital. There were wins for Wembley Rvs and Kilmallock.

Ballynanty Rvs won the only game played in the third tier beating Murroe 3-0.

Shelbourne and Geraldines both added three points to their tallies with wins on Sunday.

Croom, Kilmallock and Newport all secured wins. Knockainey and Murroe shared the spoils.

Pallasgreen and Coonagh both won their games. Bruff and Athlunkard share eight goals in a thriller.

Caledonians, Mungret and Shelbourne all secured three points. Croom and Northside was called off.