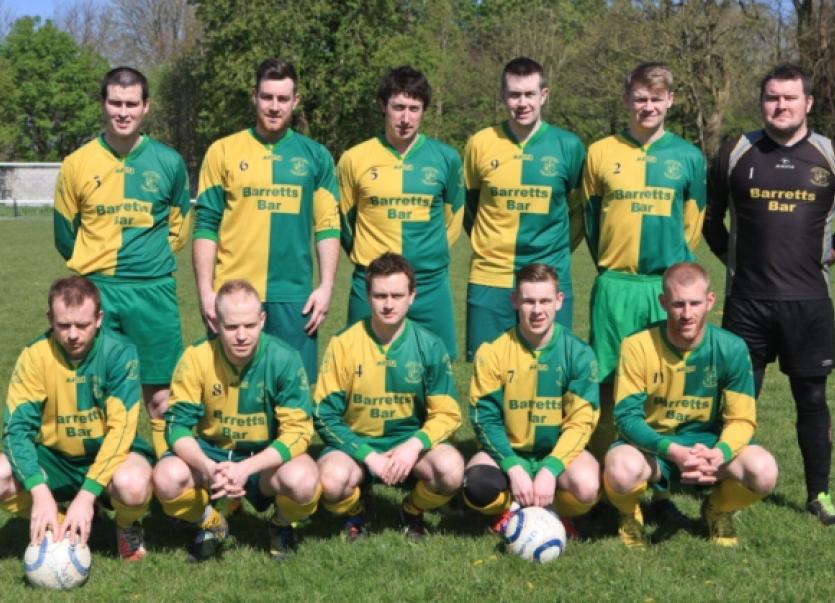 All the Desmond League fixtures for the next week, April 26 to May 2. All the recent results are also included.

All the Desmond League fixtures for the next week, April 26 to May 2. All the recent results are also included.

Rathkeale/Abbeyfeale Utd B V Newcastle West, 7.30, Clounreask (To be confirmed)

Newcastle West B w/o from Athea Utd B; Granagh Utd 1 Ferry Rangers 2

Glin Rovers B w/o from Broadford Utd B

NOTE: The games originally fixed for Friday, April 25, are off because of a referees seminar.

The FAI have announced that the Rep of Ireland will take on England in an international friendly game that is scheduled to take place in Aviva Stadium on Sunday June 7th 2015.

The match will be part of the 2014/15 season ticket which is now on sale. The 6 match season ticket package including England, Scotland and Poland will start from €54 for kids and €138 for adults.

Anyone interested in this ticket scheme should contact League Secretary, Eddie O’Shaughnessy asap by e-mail or at 087 2543852. The FAI say that the England match is unlikely to go on general public sale.

PLAYER OF THE YEAR

As requested, clubs have submitted the player from their club that they wish to put forward for consideration in voting for Player of the Year in the division(s) in which they have a team. The nominations from the clubs have now been sent out and clubs must e-mail their choices by the 4th of May to League Secretary, Eddie O’Shaughnessy. Clubs may not vote for their own player at this stage of the selection process.

Evening matches started last Friday and clubs are reminded that results of evening matches must be phoned in by 10 pm of the evening in question. The results of Saturday and Sunday matches must, as usual, be phoned in by 4.30 pm or, in the case of afternoon Cup matches going into extra-time, as soon as possible after that. The person to phone is Frank Nelligan at 068-31386. For logistical reasons, don’t ring the mobile number.