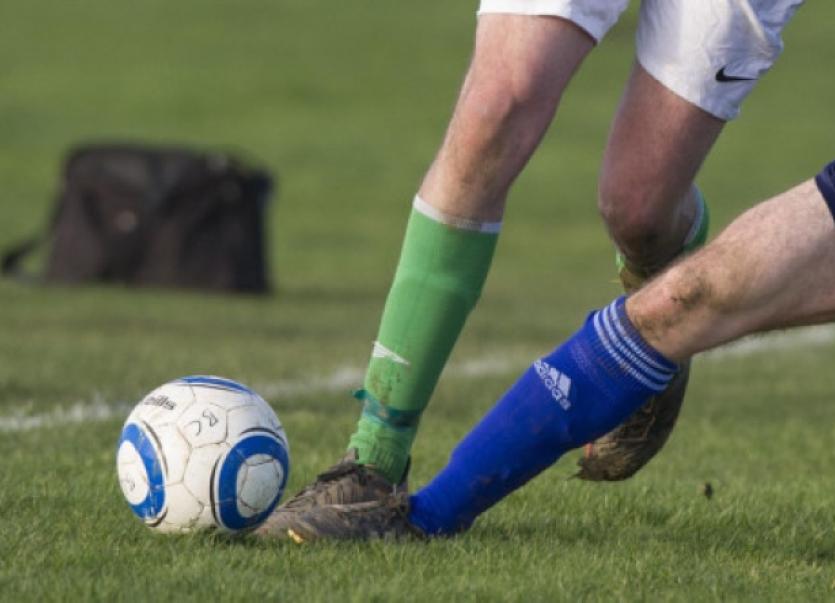 Pat Sheehan rounds up all the local weekend junior soccer action where the highlight was Geraldines win in the FAI Junior Cup.

Pat Sheehan rounds up all the local weekend junior soccer action where the highlight was Geraldines win in the FAI Junior Cup.

Kings of the Road, Geraldines, recorded another memorable victory on their travels on Saturday afternoon when they beat Dublin side East Wall to book a place in the last eight of the FAI Junior Cup.

The Dines have been like a breath of fresh air to local soccer this season and after reaching the out of town stages of the National tournament few gave them hope on two trips to Dublin and one to Cork.

However Paul O’Donnell with the help of Mike Considine and Derek Hogan, have assembled a squad full of enthusiasm, guts and of course skill and they faced each challenge with little fuss to make it to the quarter finals.

Sundays game saw them take on a physically stronger East Wall side and despite going behind to an early goal, they held their nerve before winning through.

Hero of the day was goalkeeper Keith McCarthy who made two super saves in the nail biting penalty shoot out. It was justice for the keeper who showed great character to recover from an early mistake that handed the home side the lead.

Conditions were brutal for both sides with gale force winds and lashing rain but that did not take from the competitive nature of the game.

The visitors had the worst possible start to proceedings when Keith Richard knocked a ball into the area. Keith McCarthy came to collect but the ball squirmed free to the grateful David Lee to fire home.

With the gale at their backs ‘Dines went chasing an equaliser and went close when Pat Moloney picked up from Bobby Tier and picked out Colin Scanlon who skimmed the Dubliners crossbar.

Two minutes later Christy O’Neill played an excellent through ball for Bobby Tier to let fly from 25 yards but was denied by Philip Boyle in the East goal.

Just before the break Paul Fitzgerald made a good run and picked out Pat Moloney who cushioned the ball back to allow Bobby Tier try another long ranger but again the keeper got the required touch.

The weather worsened after the restart as Geraldines continued to press for an equaliser.

On the hour mark a good delivery from Derek Daly saw Pat Moloney rise and flash a header just wide of goal.

Shortly after a diving header from Paul Danagher was also just off target but ‘Dines got their reward on 72 minutes when Booby Tier found Moloney who held off his marker well before teeing up Colin Daly to hit a beauty from 30 yards to the top corner.

The home side were reduced to ten men shortly after but managed to hold out to extra time.

Nerves played their part in extra time but both sides had a chance to win it.

In the first period Stephen McGuire cracked an effort from outside the box that hit the upright and rolled along the line into the grateful arms of McCarthy.

At the other end Daly and Moloney combined to set up a possible winner but Boyle made a fine save and so to the dreaded shoot out.

Ballynanty Rvs joined Geraldines in the hat for the quarter final draw (which is scheduled to take place on March 10th in the Aviva) following their 1-0 win over Carrick Utd on Sunday afternoon.

While there was little to separate the sides in truth Balla were well in control of the game and in fact keeper Stephen McNamara hardly had a save to make in the game.

The Waterford came to LIT with a big reputation but they failed to match the enthusiasm of the home side for much of the game.

The game was preceded by a minutes silence for the late Eugene Storan, Mungret Regional secretary.

The first half was battled out in the middle of the park with chances at a premium.

Tony Fahy tested Irish keeper Adrian Walshe with a cross from wide on the right that nearly crept in at the back post.

The visitors went close midway through the half when Ian Cleary poked the ball past the advancing Stephen McNamara but inches wide of the upright.

The visitors had a lucky escape when Walshe’s kick out struck Derek O’Hanlon but looped inches over the top.

A David Dunphy corner was headed narrowly wide by Ken Meehan and just before the break Tony Fahy lost possession and tripped Dale O’Mahoney which earned him a yellow card. However the Waterford player retaliated and received a red card.

A man down Carrick played a holding game on the restart and Balla found it difficult to break down. A 20 yard effort from Danny McInerney was all they offered until the only goal of the game arrived ten minutes from time.

Derek O’Hanlon was fouled on the end line and from the resultant free kick Brian Doran delivered into the area where Ken Meehan bundled the ball over the line.

A quick break by Eddie Radcliffe created a chance for Alex Purcell to wrap it up but he fired wide from a good position.

The visitors went all out in the closing minutes but Balla held out for a deserved win and now go into the hat along with Sheriff YC, St Michaels, Collinstown, Carew Park or Regional Utd, Geraldines, Liffeys Pearse and NUI Galway to fight for a place in the semi finals.

With all other local games cancelled due to the monsoon like weather over the last week, attention turned to Annacotty on Sunday morning where Aisling’s superb facilities hosted the Premier League game between Aisling and Summerville.

Despite the conditions a fine crowd turned out and were rewarded with an exciting game particularly the second half which produced six goals.

Summerville, under the astute eye of Pat Koyce continued their fine form recording their 12th win of the season.

Aisling are too close to the drop zone for comfort but they are too good to go down and will continue to improve as the season progresses.

You normally expect Darren (Daz) O’Sullivan to be among the scorers for Summerville but it was his namesake winger Darren O’Sullivan who stole the limelight with a superb brace of goals.

James O’Donnell, Mike Costello and Jordon Boland were also to the fore for the winners.

Aisling battled gamely and could have won the game with a little luck.

A lively opening saw Manjor let fly with a volley that whizzed inches wide while at the other end a defensive gaffe handed Daz O’Sullivan a great opportunity but he was dispossessed by Aisling keeper Danny Fitzgerald when he should have scored.

A brilliant save by Summerville keeper Mike Costello denied Keegan Park the opening goal and midway through the half good approach work by Des Quinlivan and Darren O’Sullivan saw the latter shoot inches wide of the far post.

An inswinging free kick from Richie Mullins forced Summerville keeper Mike Costello into another superb save while just before the break, sloppy Aisling defence saw the Kuba Domanski fouled on the edge of the area from which Darren O’Sullivan was just off target with the resultant free kick.

Darren O’Sullivan whizzed a shot inches wide of the goal.

Summerville opened the scoring just after the restart when Jordon Boland finished coolly from the left side.

Aisling responded well and were level within minutes when Chimka Manjor knocked the ball into the danger zone and Darren Nolan blasted to the roof of the net from 10 yards.

Summerville were back in front on the hour mark when Darren O’Sullivan raced in from the right and hit a belter to the top corner.

The game flowing end to end at this stage. Keegan Park fired wide from ten yards after good work by Noland and at the other end a mazy run by Boland created an opening for Daz O’Sullivan but he was unable to beat Fitzgerald.

With 15 minutes remaining Anthony Cusack won a corner for Aisling and Nolan’s delivery caught Summerville ball watching as Mullins headed back across goal for Brian O’Donovan to blast home from 6 yards to level the tie.

The visitors were rattled and Aisling nearly took the lead from a Park free kick that was well saved by Costello.

A quick breakaway by Summerville saw David Nash upended in the area and from the spot kick, Daz O’Sullivan slotted in his 14th goal of the season.

Aisling’s reply was a long range effort by Manjor that was held by Costello before the visitors wrapped it up five minutes from time. Boland picked out Daz O’Sullivan and his lay off to his namesake was blasted to the net to seal a fine win.

In Division 1B Aisling B and Balla B played out a scoreless draw while in the Under 17 League Aisling beat Herbertstown 5-2.

Barry Madden (2), Evan O’Connor, Shane Hogan and Matt Killing scored for the winners while Pat McDonagh and David Hannon replied for the losers.